Politics major and Cole Scholar Ilana Foggle ’21 will spend the summer in Des Moines, Iowa, participating in fieldwork on Kamala Harris’ 2020 presidential campaign as a member of the communications team.

Can you talk about how you came across this opportunity with Kamala Harris’ presidential campaign?

The opportunity to work on Kamala Harris’ presidential campaign would not exist without the Cole Scholars Program, Professor Michael Parkin who facilitates the program, and Professor Eve Sandberg, who helped to set up my placement. All Cole Scholars have one-on-one meetings with Eve, where they discuss their research goals for the summer, as well as their ideal campaign placements. Going into my meeting, I knew that my dream would be to work on Kamala Harris’ communications team. Eve already knew that I had previous campaigning experience and that I really wanted to work on a presidential campaign. When we met, Eve told me that she would pass on my resume to the Iowa communications director to see if they had any interest in bringing me onto the team for the summer. After interviewing with the communications director and sending along references, I was officially offered the position. I am so incredibly grateful to the Cole Scholars Program for not only making my dream a reality, but also for providing the financial resources to make sure that all students can participate in the program.

What kind of fieldwork will you be doing for the campaign?

I will be working on Kamala Harris’ communications team in Des Moines, Iowa, and doing fieldwork and youth organizing in the area. A lot of my communications work will involve building relationships with local press, compiling media coverage lists, and assisting in the management of Harris’ Iowa social media platforms. A lot of my fieldwork and organizing will be centered around voter mobilization in preparation for the Iowa caucuses on February 3, 2020.

Has your position as an Oberlin student helped you prepare for this position?

Absolutely, yes! I would not have the experience, knowledge, or skills to prepare me to work on Kamala Harris’ presidential campaign if it weren’t for Oberlin. The Career Development Center has helped me obtain winter term internships in the political world that have prepared me for the fast-paced environment of a political campaign. My professors in the politics department have given me the knowledge and support to successfully navigate the current political climate while working on a presidential campaign. In fact, assistant professor Jenny Garcia encouraged me to write my final research paper for her class, American Presidency and Power, on a winning campaign strategy for Kamala Harris’ presidential campaign. I honestly could go on and on about the incredible faculty, support systems, and resources that have prepared me for interning at Kamala Harris’ campaign this summer.

What do you do within the Cole Scholars Program and how has it informed your experiences within and outside of Oberlin?

Going into the Cole Scholars Program, I had already worked on a congressional campaign and interned at a progressive political campaigning firm in Washington, D.C. These opportunities gave me a lot of insight about political campaigning through a practitioner’s lens. As part of the Cole Scholars Program, I took the Studies in Electoral Politics course, in which we analyzed political campaign strategy from an academic and research-based approach. The combination of these experiences has completely shaped the way that I look at political campaigning and the importance of voter mobilization efforts. When we return from our summer placements to Oberlin in the fall, Cole Scholars will be writing individual research papers combining our fieldwork research and our academic research. My hope is to write my paper on the intersections of voter mobilization, identity, and communications. With that said, the Cole Scholars program hasn’t just informed my experiences as a campaign practitioner or as a political researcher. It has also informed my experiences as a voter. As the 2020 election comes closer, I hope to take the knowledge and experience that I have gained as a Cole Scholar and apply it to mobilizing young voters in our community.

What part of this experience are you most looking forward to?

Wow, I don’t know if I can pick just one! First, I am super excited to be in Des Moines as a part of Harris’ campaign. Not only is Iowa the first state to hold primary elections in the 2020 election cycle, but the nature of the Iowa Democratic caucus also provides an interesting framework for me to research voter mobilization efforts as part of a presidential campaign. The results from the Iowa caucuses will be extremely telling of who the likely frontrunners are for the Democratic nomination, and I am thrilled to have the opportunity to be involved in this process. Second, I am so happy to be working on a campaign for a candidate that I have always looked up to. On the night of the 2016 election, I felt devastated, fearful, and discouraged. As a 16-year-old who was unable to vote, I felt incredibly disillusioned with the electoral process. However, when I heard that former attorney general of California Kamala Harris had won her Senate campaign, I felt an emotion stronger than fear: I felt hopeful. I think my 16-year-old self would be incredibly proud that less than three years later, I would end up working on this presidential campaign. 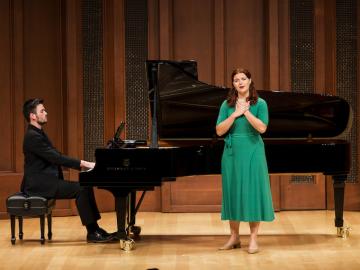