In the weeks following commencement, as students leave town and residents, staff, faculty, and local business owners take some much-needed time off, the town of Oberlin kicks back. For the next three months, the community celebrates the summer with such mellow pastimes as Chalk Walk, the Summer Concert Series, and — running this year for six consecutive weeks, from late June through early August — the fifth season of the Oberlin Summer Theater Festival (OSTF).

Founded by Associate Professor of Theater Paul Moser, OSTF is a professional, not-for-profit summer company that provides community members of all ages with free, family-friendly productions of Shakespearean and more contemporary classics.

The inspiration for the festival stems from Moser’s work with the Black River Theater Company, which he founded in 1992. In 2009, with the help of a dedicated group of associate artists, Moser put together a new company comprised of students, alumni, professional Equity actors, and former Black River Theatre Company members for OSTF’s inaugural season, which featured productions of The Tempest and Tennessee Williams’ The Glass Menagerie.

Five years later, OSTF has expanded to include a third production per season, additional performances, and a weeklong Acting Shakespeare Intensive for local high school students taught by Assistant Professor of Theater Heather Anderson Boll (who plays a role in this year’s production of The Diary of Anne Frank). OSTF is an Oberlin sponsored program, administered separately from — but in cooperation with — the Oberlin theater department.

“Key to the mission of OSTF is to produce theater classics for a family audience, chosen from the canon of plays that everyone really should have seen performed live by the time they get out of high school,” says Moser. “Every year we have produced a well-known Shakespeare, then usually a classic from the American stage, and then one show which is specifically aimed at attracting families with kids.” This year’s contributions to those categories are, respectively: Twelfth Night, Light Up The Sky, and The Diary of Anne Frank.

While theater attendance in the United States has declined, OSTF has managed to steadily build its audience with the promise of free admission — a rarity for any single show performed by a professional theater company, much less an entire season.

“Competition by technological media has much to do with [the decline in theater attendance], but theater practices have added to this problem,” says Moser, who cites $30-per-ticket prices at most not-for-profit theaters as simply unaffordable for most families, especially if they want to take their kids. “Our free admission policy is designed to make us as accessible as the public library — allowing anyone in the community who wants to attend have easy access to our shows. Our play selections are also designed to be family friendly and inclusive of the various cultural backgrounds of our audience. We want to make attending live theater an enjoyable, cherished family activity that will inspire a new generation of theater-goers in our area.”

And things have so far gone very well. Last year’s audience increased by 34 percent from the previous season — up to about 8,400 attendees, a number that is more than double the attendance of OSTF’s first year and includes many Oberlin locals as well as residents of the surrounding area.

“At this point, about one-third of our audience is from Oberlin, one-third from other parts of Lorain County, and that last third is from other counties in Ohio or beyond,” says Moser. “We are hoping that in the next few years we can significantly increase attendance from Lorain County and the west side of Cleveland.”

An additional draw for the audience is the repertory ensemble nature of OSTF, which means that the actors play several different roles in the same season. “It puts the focus of our theater on the actors,” says Moser. “The audience enjoys seeing these actors transform from play to play and return from season to season.”

Of the two dozen actors in this season’s company, eight are Equity members, six are Oberlin alumni brought in from New York or Los Angeles, four are local non-Equity actors, and six are current students.

Tip Scarry, a theater major from the class of 2011, has spent the past two years living in Los Angeles, working and auditioning for TV, film, and a bit of theater. When Moser invited him back for OSTF — in which Scarry will star as Duke Orsino in Twelfth Night and Tyler Rayburn in Light Up The Sky — Scarry was eager for the chance to revisit the stage where he first began working on his acting.

“The reality of being an actor starting out in the real world is different from its preceding educational setting,” he says. “The former, at this particular moment, involves far less acting and far more self-promotion and auditioning. So it feels good to have the opportunity to see this process I so enjoy all the way through.”

Each play gets four to five weeks of rehearsal before the official performances begin. Rehearsals for a single production run four hours per day, six days a week; with more than one production in the works at a time, the cast and crew can be in rehearsals for up to eight hours a day. In addition, most of the actors contribute in other areas of the company, working in the tech department or on publicity, adding another four hours of work outside of rehearsals.

The days are long, but the experience is well worth the time and effort. For rising junior Anna Winneg, a psychology major and French minor who will play the role of Anne Frank, “working side-by-side with professionals in this business is such a gift,” she says. “I have learned so much from the folks I’ve met here. When you walk into rehearsal, you immediately feel a sense of heightened standards and attention to detail. It is really wonderful to feel that I can put so much trust in the people on stage with me because they are so experienced, but it definitely makes me take more responsibility for my performance. And while we are all taking every scene and every step very seriously, the room is always full of laughter.”

The experience of working with OSTF is equally rewarding for the alumni and professional actors. “The alumni enjoy returning to their alma mater to recharge their creative juices and work on some meaty roles in meaningful projects in a supportive and familiar environment,” says Moser. “The local older actors love doing OSTF, mostly because we are committed to building a body of really good work together, but also in part because the free admission policy has helped us build a wonderfully diverse, enthusiastic and loyal audience, which feels very different from performing at other local theaters.”

“Having an audience made up of so many different kinds of people — some who see theater once a week all year long, some who have never seen a play before — makes this acting experience challenging because we as a company have to work extra hard to ensure that every single audience member feels connected and engaged with the production,” says Winneg. “That universality is what makes this kind of theater so rewarding.”

For more information about the Oberlin Summer Theater Festival’s 2013 season, visit the OSTF website. To reserve tickets in advance, call the box office at (440) 775-8169 or e-mail ostf@oberlin.edu. 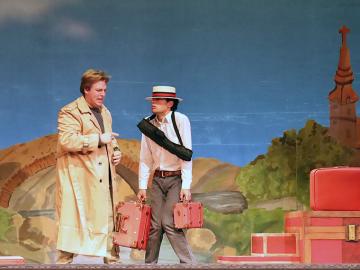 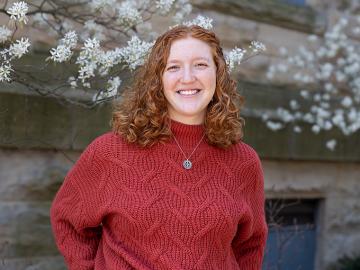