Joshua D. Angrist ’82 was awarded the 2021 Sveriges Riksbank Prize in Economic Sciences in Memory of Alfred Nobel. Angrist shares half of the award with Guido W. Imbens of the Stanford Graduate School of Business "for their methodological contributions to the analysis of causal relationships." The other half of the award goes to David Card of the University of California at Berkeley "for his empirical contributions to labour economics."

Angrist, who is the Ford Professor of Economics at the Massachusetts Institute of Technology, was recognized for his work in interpreting data from natural experiments. His pioneering research laid the groundwork for researchers to draw conclusions about cause and effect from real-world situations. “Their research has substantially improved our ability to answer key causal questions, which has been of great benefit to society,” says Peter Fredriksson, chair of the Economic Sciences Prize Committee.

In an MIT press briefing, Angrist said he is “humbled and gratified” and that this is “the greatest honor a person could have” and “a high point of his life.”

Oberlin President Carmen Twillie Ambar commended Angrist for his groundbreaking work. “We at Oberlin are so proud that the work that he and his fellow researchers conducted will further the discipline of economics. Joshua was an economics major at Oberlin College & Conservatory and graduated with highest honors.  We are pleased that Oberlin played a part in shaping his economics career, and that he has continued the Oberlin tradition of graduates who further knowledge for the benefit of others, who make an invaluable contribution to society, and who shape the world for good.”

David Kamitsuka, dean of the College of Arts and Sciences, says he was thrilled to hear of Angrist’s selection as one of three winners of the Nobel Prize.  “Our students can take inspiration from Professor Angrist, as they too gain the critical foundations for future success at Oberlin College,” he says.  “I could not be more pleased to hear news of this recognition for Professor Angrist’s ground breaking work.”

Angrist’s research interests include the economics of education and school reform; social programs and the labor market; the effects of immigration, labor market regulation and institutions; and econometric methods for evaluating programs and program and policy evaluation. A native of Columbus, Ohio, he earned a master’s degree in economics at Princeton University in 1987 and a PhD in economics at Princeton in 1989. He was an assistant professor at Harvard University for two years and a faculty member at Hebrew University until 1996, when he joined the MIT faculty.

Angrist joins three other Oberlin graduates whose work has been honored with a Nobel including Robert Millikan (physics) in 1923, Roger Sperry (medicine) in 1981, and Stanley Cohen (medicine) in 1986.

Cinema Studies alumni Drew Dickler and Jake Hochendoner are codirectors of a documentary that tells the story of incarcerated men who are fighting the deadliest and largest fires in California's recent history. The film was released on VOD on August 3. 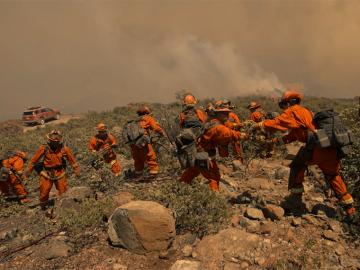