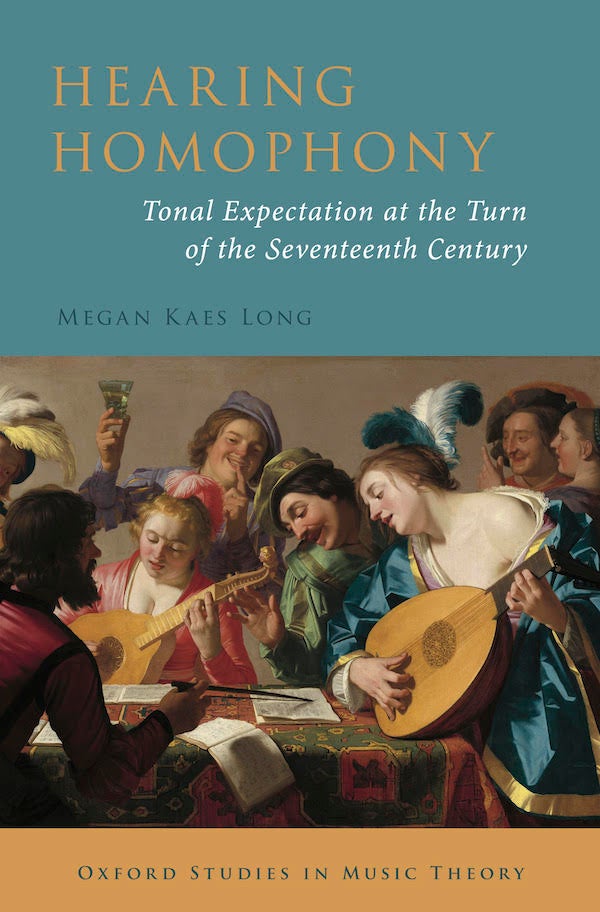 Megan Kaes Long, an associate professor of music theory at Oberlin Conservatory, was awarded the 2021 Wallace Berry Award by the Society for Music Theory.

The prize is given annually for a distinguished book by an author at any age or career stage. Announced in November, Long’s honor acknowledges her book Hearing Homophony: Tonal Expectation at the Turn of the Seventeenth Century, which was published by Oxford University Press in 2020.

The Wallace Berry Award comes one year after the Society for Music Theory recognized Long as its Emerging Scholar for her paper “Cadential Syntax and Tonal Expectation in Late Sixteenth-Century Homophony,” which was published in the spring 2018 issue of Music Theory Spectrum.

Long’s paper was a precursor to her book: Both explore the emergence of tonal languages in late-16th-century homophony by examining the ways in which phrase structure, meter, and cadential rhetoric produce “trajectories of expectation.” Long’s research centers around homophonic popular songs composed in Italian, German, and English; her book demonstrates how workaday musical features like text setting and meter regulated harmony and counterpoint to transform contrapuntal languages into tonal languages.

This year’s Wallace Berry Award reexamines and reconceptualizes one of the most fundamental topics in our discipline—the concept of tonality. Through a meticulous assessment of the way it has been defined, interwoven with a detailed, multifaceted analysis of an understudied repertoire, the author sheds new light on the way we can understand both tonality itself and its origins. By considering a broad range of contextual elements, such as dance and function, and structural ones, such as text, texture, and phrase structure, the author convincingly argues for the importance of rhythm and meter in the harmonic trajectory of early seventeenth-century vernacular part-songs. Her findings show the need to redefine our understanding of tonality and the factors that led to its emergence.

"I’m so grateful to Oberlin for giving me the resources I needed to research and write this book," says Long. "I was tremendously fortunate to benefit from our extraordinary library resources, the insights of my brilliant colleagues, and the support of a research status grant and sabbatical leave.”

Long is continuing her study of the tonal language of Renaissance music; her most recent project explores how music pedagogy informs counterpoint and tonal structure in the music of English composer William Byrd.

The Wallace Berry Award is named for late Canadian-American composer and music theorist Wallace Berry, co-founder of the Society for Music Theory.