In the late 1990s, Professor of History Steve Volk took a trip to Texas. As a newly appointed member of the Border Studies Program’s (BSP) faculty advisory council Volk had been invited by the program to meet the staff and students and see the place for himself. During some free time before his meeting, Volk decided to go to Mexico. He paid a quarter, walked for a few minutes above the Rio Grande River, and there he was, standing in the middle of a bridge as hundreds of people poured by him in both directions — to El Paso on one end, Ciudad Juaréz, Mexico, on the other.

As Volk stood on the bridge that day, something occurred to him: these two cities — and countries — were deeply connected in ways that a wall could never separate.

“The idea of closing off the border, of sealing off the United States, was impossible,” Volk remembers now. “And all you had to do was stand on the bridge to see that’s not going to happen. The two areas are too integrated. The difference between El Paso and Ciudad Juaréz is that there are fewer ruts in the road in El Paso. That’s about the only difference you could tell. It’s the same people on both sides.”

In those fledgling years of the BSP, students lived and worked in both the Texas border town and in Ciudad Juaréz; they were among the thousands of people who made the legal crossing from the United States to Mexico and back nearly every day. This seemingly innocuous act of border crossing is at the epicenter of the BSP, a Great Lakes College Association (GLCA) program based in the southern borderlands of Tucson, Arizona, and run by Earlham College.

Since the idea for the BSP was first conceived of by the GLCA in the mid-90s, dozens of students have participated, though not all in the same location — although the program was designed to take place between El Paso and Ciudad Juaréz, the BSP’s directors made the decision to move the program to Tucson in 2008.

Located 60 miles from the border, Arizona’s second-largest populated city provides the BSP with an ideal location to teach students about the realities of life on opposite sides of the border. These realities prove difficult to process and comprehend, but which are always eye-opening and even life-changing for the students that participate in BSP every fall and spring semester.

Instead of jetting off to exotic locales in Europe or Africa, students from GLCA schools like Oberlin have chosen to spend their semesters away within their own country. Tucson proves to be a world apart from Oberlin, while at the same time not so far removed. Students have the opportunity to brush up on their Spanish, discover new people and places, and learn more than they could have imagined — not only about life on the border, but also about themselves, and to take that knowledge back to Oberlin.

Before junior Mariel Cohn, a Latin American studies major, left to spend her fall 2012 semester in Tucson, she couldn’t have comprehended the caliber of learning she was entering into — a kind of learning that isn’t regulated to a classroom.

“A lot of the more mundane details of my life, or the things I don’t usually take the time to pay attention to in Oberlin, were things that I was always thinking about in Tucson,” says Cohn. “Everything felt highly relevant to me all the time. Border Studies asks you to be conscientious and be aware of a lot of things that are going on around you. When you leave the classroom, the learning experience isn’t over.”

Although the students enroll in two classroom-based courses during their 15-week semester — the fall courses focus on globalization’s impact on food systems and the environment, while the spring curriculum centers on border enforcement, human rights, and immigration policy — the additional three take place outside the classroom. Students take part in weekly field trips and visits to various locations in and around Tucson, including trips to Mexico and Guatemala, and attend lectures by visiting speakers. Outside of class, students work with a local organization to complete an internship dealing with a topic they are passionate about — there are opportunities to work on issues such as environmentalism, art, local food, and social justice.

Students who thrive in such a learning environment are the ones who “can exist without great structure, who are flexible, who make a lot of their lives themselves,” says Volk. “Many of them are very active politically and environmentally, which are issues that are sharpest on the border. And they have to be willing to take risks. Because the program is risky — not in terms of their safety, which we protect — but in terms of the things they deal with.”

The immediate impact of the realities of life on the border — for immigrants and American and Mexican citizens — is a rude awakening for many students coming from relatively isolated Midwestern colleges. Katie Sharar, a 2003 alum of the BSP and its current assistant director, sees a kind of paralysis hit students about halfway through the program, at a point when “they get so weighted down by questions of their own privilege that it makes it hard for them to act. But it becomes a humbling process — becoming really awake to their privilege, if nothing else because they have access to a liberal arts education, and to how that isn’t necessarily a paralyzing thing.”

“I went through a lot of disillusionment at Border Studies,” says Cohn, citing a particular instance when the students sat in on a mass sentencing that was a part of Operation Streamline, a program begun in 2005 that prosecutes immigrants who cross the border illegally with a criminal offense rather than a civil one.

“That was a moment for me where I just thought that the world is broken, that there is no justice,” says Cohn. “But even at moments like that, I never lost energy to learn. Because being there and thinking as much as I was felt really fulfilling. It felt really different from any other educational experience I’d had before, or really just any other experience in the world that I’d had.”

“You just have to have that energy to keep fighting,” says senior politics major Will Wickham, another fall 2012 Border Studies alum. “Obviously we went through these ups and downs, but you have to stay on top of it, you have to keep your head above it. There are times to sit in that discomfort and sadness, but you can’t stay there.”

Such lessons reminded Wickham of “the radical promise of higher education” — being with a community of people, from professors to other students to community organizers, who are committed in a lifelong way to learning even as they face some seemingly insurmountable injustices.

“We were learning to be really critical of ourselves and of the world — how to see the world and name it for what it is,” says Wickham. “That was the biggest eye-opener for me — it does matter how and what people are learning. We’re not just doing this because we can, or because we’re going to get better jobs, or because our parents expect it. There is a real purpose in it.”

Alice Ollstein ’10 took part in the BSP in the spring of her junior year. Even several years out from her experience, she remembers the personal attention and support that each student received from the staff.

“That support was really important, because learning graduate-level research methodologies, negotiating host family dynamics, and seeing human suffering up close can be a lot to handle for a relatively sheltered Oberlin student,” says Ollstein. “The staff helped us take all our shock and frustration and depression at seeing so many people caught up in a cruel immigration system and turn it into productive action.”

Such productive action certainly begins while the students are still in Tucson, usually manifesting itself through their work in various internships. Ollstein worked with the Samaritans, one of the seven organizations in Arizona that sends volunteers out into the desert to give water, food, and first aid to migrants crossing the border. Cohn worked with the Tucson food bank, helping to maintain the 60 plots of community garden available to the city’s residents. Wickham spent his time with the Alliance for Global Justice (AFGJ), an organization completing Latin American solidarity work, to compile an online reference guide about immigration and border militarization. Dozens of programs like these are available for students to pick from.

The experiences and lessons learned from these internships filtered back into life after the BSP, both at Oberlin and beyond. Ollstein now works as a radio reporter and Washington, D.C. editor for Free Speech Radio News, an independently produced daily program that focuses on issues of social justice, where she regularly reports on immigration issues. Wickham continues to work on chapters of the AFGJ manual as he finishes classes, releasing weekly chapters online. And Cohn is considering taking a semester to work with a land conservation program in Montana, an experience she believes might prove to be similar to her time spent in the community garden in Tucson.

The BSP’s locations within the students’ own country seems to strike a chord — what students experience and learn there proves to be closer to home than they might have thought.

“When students return to their campuses, it’s not so easy to put these experiences behind them, because all of these things play out in those places as well,” says Sharar. “Geographically, we’re situated on or close to the border. But the border is everywhere. What we see here takes place in other parts of the country where students’ colleges are located and where their families live as well. And that’s something we encourage — continually asking difficult questions of yourself after you leave the program. It’s not just relegated to this place.”

So does the BSP make a difference in the realities of life on the border? Is it making life better for Mexican-American immigrants? Is there tangible change for the better resulting from the students’ work?

“To the extent that BSP really produces people who go on in the rest of their lives to work on these issues,” says Volk. “Yes. I have no doubt.”

Oberlin has been recognized as a top producer of Fulbright Students for the 2018-19 academic year. 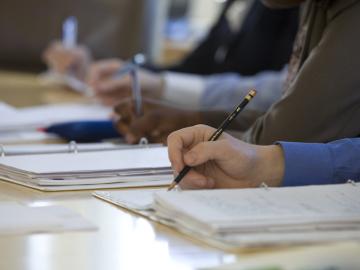 While studying on a Fulbright grant in Brazil, Laura Li ’14 cofounded a multimedia project, Racialeyes, to explore the complexities of the Asian diaspora and experience in Brazil. 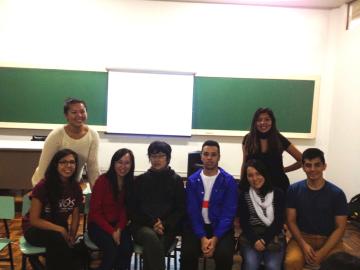 During winter term, 12 students traveled to England’s capital to experience the history and variety of the city’s theater scene. 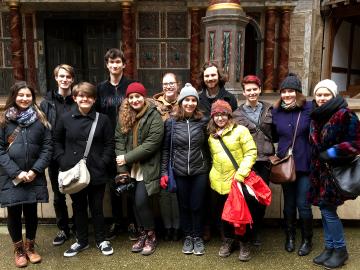