Workshop participants used the matrix laboratory commonly known as MATLAB. The programming language allows matrix manipulations, plotting of functions and data, implementation of algorithms, creation of user interfaces, and interfacing with programs written in other languages. After spending the first two weeks becoming familiar with the program, participants were led through several modeling principles.

“We covered a lot of modeling principles, and focused specifically on some fundamental models in the field of neuroscience, such as reinforcement learning, Bayesian inference, and Drift Diffusion Models," explains van der Merwe. "Essentially, there are basic models or equations that exist for most neural processes, and the trick is knowing how to modify them for the specific research question you are trying to answer.” 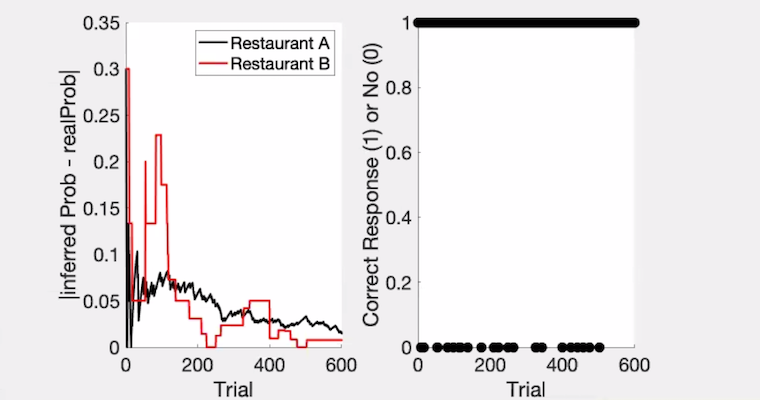 “Computational modeling is a mathematical formalization of complicated systems or processes,” says van der Merwe. “It relies on generating equations that describe how an output results from inputs and properties. Use lunch as an example. The inputs would be the options available, while the properties would be the individual preference for Mexican food over Lebanese or American. Therefore, the output/choice would be eating lunch at Lupita’s Mexican Restaurant. The input and property values are weighted to generate different likelihoods of various outcomes, and these values can be updated as more evidence is presented.”

According to van der Merwe, a neuroscience major, MATLAB is one of the most prevalent programs in the neuroscience field because of how versatile it is, and because it is able to capture complex problems in relatively simple code.

“Models can provide insight into behavior that can’t always be inferred from descriptive analysis.” “They provide standardized explanations for complicated phenomena, and can cut down on the cost and time associated with wet-lab experiments. Not to mention, it avoids the ethical concern of using animals as experimental subjects. Because I am planning to pursue graduate work in the field of neuroscience, I was really excited to develop an introductory understanding of computational modeling and programming in MATLAB.”

Prior to the workshop, van der Merwe admits to being skeptical about the idea of computational modeling, particularly, how scientists could effectively learn something new about the brain from models that are limited by their current understanding. “However, seeing how these models map on to my previous understanding of how processes like learning and perception occur, I became more and more convinced of their utility. They can reveal patterns and associations that we otherwise might not pick up on, and therefore will be fundamental in propelling us into a new dimension of comprehension.”

Van der Merwe is on campus this fall, with plans to undergo a research project with neuroscience faculty members Christopher Howard and Patrick Simen using topics that were covered in the MATLAB workshop. The group’s project will study the neural mechanisms underlying the perception of timing using the Drift Diffusion Model. This model attempts to capture how the brain arrives at a correct response to a task that has two possible responses, says van der Merwe.

After graduation in May, van der Merwe plans to return to Brown University to continue working in the MATLAB before spending two years at the National Institutes of Health and applying to neuroscience PhD (and potentially MD-PhD) programs. The goal is to work in a medical school as a physician scientist doing translational research on neurodegenerative diseases such as Huntington’s and Parkinson’s.