As the school year begins, we welcome hundreds of new Obies on campus—students and faculty alike. One of those newcomers is Katherine Jolly, who joined the faculty of the conservatory’s Division of Vocal Studies this summer.

The Davis, California-raised soprano will present a recital alongside faculty cellist Amir Eldan and guest pianist Kyung-Eun Na, AD ‘04 at 7:30 p.m. Sunday, September 15, in Warner Concert Hall. The program includes André Previn's Four Songs for soprano, cello, and piano, which is set to words by Nobel Laureate and Lorain, Ohio, native Toni Morrison, who died in early August. (The Toni Morrison Society is based at Oberlin, one of numerous links between the late author and campus.)

In August, Jolly released Preach Sister, Preach, an album of new vocal works by young composers. She shares with us details of her life in singing, her approach to teaching, the promise a young Jolly once made in her pink diary, and the advice she would give any first-year singer.

What brought you to singing?

I think many of us come to singing through kind of a calling. I was quite young. By the time I was 2, I was dancing all the time, and I started to play the piano by ear at 3. I saw my first musical at 6, and I said to my mom, ‘‘I want to do that.’’ And she said OK, and I said, “No, I really want to do that.” The same company had auditions for Annie—this was back when they still had music stores—so we went downtown and bought sheet music to prepare for the audition. I auditioned, and my mom said it was like watching a transformation. There were all these show kids who had been doing this for years, and she said I just watched and did the same exact thing. I was cast and that was the end of it.

When did you begin singing classically?

About 11. My junior high school choral teacher, Mrs. Rachel Kessler, was remarkable—at least eight of her former students have won the Met’s National Council Auditions and/or debuted there. She heard me at 11, when I was still belting, and she said, “You’re a very high soprano! No more belting.” I went home and there were all the tears, and my mom thought Maybe I should call her. So she called Mrs. Kessler and said, “Katie is really worried that you have her singing soprano 1.” Now Mrs. Kessler tells this story to many of her current students and laughs, because I have such a high voice, and she was so right.

I started reading everything I could on singers. I read Beverly Sills’ biography by the time I was 13, and I wrote in my pink diary with the lock on it that I would debut at City Opera before I was 30 ... and I debuted at City Opera the day after I turned 30, as La Fée in Cendrillon. I was just in. I was all in. I listened to everybody, I read everything I could read, I subscribed to Opera News, read every issue. Did every competition, every summer program, missed proms: I was all in.

When did you make the decision to start teaching?

I always knew I would teach. There are pictures of me at 5, teaching my stuffed animals, and you could say it’s in the blood because there are educators on both sides of my family. My parents were both academics. I started teaching private voice right after I received my master’s from Cincinnati College-Conservatory of Music in 2001. I opened my own studio outside of Chicago, and I was teaching for a performing-arts school—dance, piano, and voice. When I started singing full time in young artist programs, and then as a principal artist, it became harder, because I was gone at least six months of the year. So I started teaching more master classes and coaching younger singers wherever I was singing on the road.

I was almost 36 when I returned to CCM for my doctorate, which I completed in two years. When I began my first faculty position at Saint Louis University, I was almost 38. Two years later, I accepted a faculty position at Indiana University, and now I’m here. And I love it. I love that I can pay forward all of the incredible teaching that I’ve experienced. I’ve spent a lot of time observing in major ENT practices and otolaryngology practices around the country, so much of my teaching approach is combining speech and voice therapy exercises with vocal pedagogy, which so many of us are doing here. We’re training vocal athletes. Just like soccer players—they go to therapy after their practice sessions. There’s strength training in addition to agility training. Then they’re doing cool-downs, and warm-ups, the whole thing.

The vocal instrument needs multi-tiered approaches, to keep everybody in the best shape possible, to allow for the most longevity and the most options. When you receive these tools as a young singer, and see the benefits for stamina and recovery time, it’s highly encouraging.

There are so many ways to be a singer. How do you see musicians fitting into society as a whole?

There are so many ways to be a singer, and now more than ever, we have to train the most versatile young musicians. The opera world is changing, and it’s changing rapidly. Opera has never been an easy genre to master, but many contemporary composers are asking different things of our instruments, and they’re asking that you be comfortable crossing over and melding different genres, whether it be jazz, musical theater, or cabaret. So we have to train singers in such a way so that when they leave here, they have an instrument that allows them to go in different directions.

That doesn’t mean they’re ready when they graduate. It does mean that they have a technical foundation from which they can grow and make meaningful art in whatever way that manifests. That may mean someone is working for a nonprofit, but they start their own art-song society. Or they’re headlining a jazz-fusion ensemble and teaching voice in the community music school. Or it may be they go on to sing at the Met or Chicago Lyric. The focus is holding space for those options and training an instrument and body that are strong enough, versatile enough, and skilled enough to adapt to those demands.

Talk to me more about the body. This semester you’re teaching a new course, Movement for Singers. Do movement and mindfulness connect to vocal longevity?

I think it’s fundamental. Our instruments live in our bodies. All musicians have to find a way of identifying and releasing unwanted tensions while engaging the right muscular tension; it’s not like we can sing while relaxed. It’s the ability to identify where each microtension lies and find ways of releasing it so that we can be our most free in our vocal production and our most free to embody another character. If we are not truly comfortable inside of our own body, how can we portray somebody else? 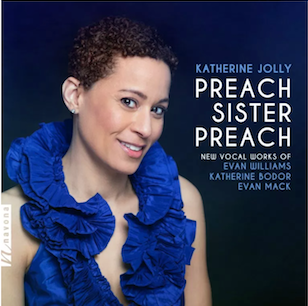 You just recorded an album of new vocal works, Preach Sister, Preach. The title song cycle sets quotes from notable women including Lucille Ball, Simone de Beauvoir, and Tina Fey, and the other works set texts by Emily Dickinson and excerpts from an essay on climate change. Why sing these pieces, now?

When we started choosing selections, I wanted them all to be works by composers that were young. All of the composers featured on the disc are under the age of 40. I love Strauss, I love Mozart, Bach, Vivaldi. All of that feels like honey for the voice. However, we also have to sing works of living composers if we are going to continue to exist and move these art forms forward. We have to be open to different styles of composition, different ways of setting text, and different treatment of the instrument.

It was important to me not only to champion young composers, but also to have an active collaborative process. Katherine Bodor, who wrote the climate change piece, was commissioned to write a work for Chamber Project St. Louis, and I was hired to sing it. We didn’t know each other, but as it happened, she was starting her master’s at Indiana University, and I was starting my faculty position there. We met, and I loved her—she’s a great human and an amazing composer. She brought in a first draft, and I said, “Katherine, this is really interesting, but how much have you listened to my voice? If you’re going to write it for me, then you should write it for me.” She was like, “Does that mean it can be more…?” and I replied, “Florid? High? Yeah. Crazy.” She came back, and it was quite crazy.

I was really moved by her passion to write about climate change. Growing up in California, I was surrounded by beauty and raised with an awareness of responsibility for our earth. If we didn’t recycle in junior high, we received detention—in the late '80s. When she told me what she was going to write about even before she had chosen the text, I thought it was perfect. It’s heavy. But is that not such a message we need right now?

Evan Williams I met at Cincinnati. He wrote this great cycle that no one had ever performed in its entirety. I love Emily Dickinson, so the poems really speak to me. We workshopped for a while, which is exciting, because it’s a really integrated process. I think it’s so important for singers and composers to learn to have a dialogue, to learn to speak each other’s languages, to have a respect for where each person’s coming from, and then to all sit down and hash it out like jazz musicians. The goal is to make the most powerful, meaningful music.

And then Preach Sister, Preach. Evan Mack is amazing; he just won the National Opera Association’s Dominick Argento Chamber Opera Competition. He wrote this cycle right after the Women’s March in D.C. It’s a very timely cycle, particularly in our field, but also everywhere. The idea that as women we have a unique voice, and that there’s a place for all of these different voices and different perspectives. I hope that people will take something away from that.

Finally, what is one piece of advice that you would give a first-year singer?

There’s so much. I think it’s maybe two-fold: Find a routine that works for you as soon as possible, and then allow flexibility within that routine. It’s important to start every day as a singer and end every day as a singer. What does that mean? That means getting up with enough time to properly wake up, to warm up a little bit, to steam in the months where you need to steam, to meditate or set intentions for that day. That your day is centered around singing. Program practice sessions when you know that you will be the most focused, clear-headed: relaxed of mind, body, spirit. End the day in a way that allows you to recover and wake up refreshed. All of that is a challenge when you’re in a demanding scholastic environment, but that kind of intentional work is really important.

I arrive on campus early every day, and I sing before I begin teaching. Unless something highly unusual has happened, there isn’t any day a student walks in that I haven’t already been working. So I start my day as a singer.

Charlotte Maskelony is a voice performance major in the studio of Katherine Jolly.