The film is an intimate look into Russo-Young’s childhood growing up as the younger daughter of two lesbian mothers. Born to two separate sperm donors, Russo-Young and her older sister Cade lived happily with their parents in New York, until her biological father sued for paternity and visitation rights, threatening to upend their “nuclear family.”

Featured throughout the documentary are interviews with Russo-Young’s mothers, Robin Young and Sandy Russo, a couple that helped paved the way in the 1970s and 1980s for LGBTQ+ people who wanted to have children. According to Russo-Young, who was just nine years old when she was thrust into the spotlight of the case, the development of Nuclear Family “took a long time to figure out,” but ultimately allowed her to “articulate the story through [her] own perspective,” a process that began back when she was a student at Oberlin College.

Known for her direction of page-to-screen adaptations Before I Fall and The Sun is Also a Star as well as her appearances in the classic mumblecore films Hannah Takes the Stairs and The Color Wheel, Russo-Young began her career primarily interested in narrative filmmaking. However, she remained preoccupied with her long-term desire to tell her own personal story through the medium of film.

“I had wanted to tell this story since my mid-twenties,” Russo-Young said, recalling several discarded drafts of narrative scripts about the case. “It was a defining event in my childhood. I had done a lot of press about it, and I always wanted to come to understand it further, but I wasn't clear on what I wanted to say or how I felt about it.”

When Russo-Young was awarded a Creative Capital grant in the fall of 2019, she worked with an editor to assemble a mock trailer, and decided to make a documentary. Because Russo-Young had filmed her family on home video as a hobby growing up, the archival footage combined with press footage from the 1999 PBS documentary Our House—which featured the Russo-Young family—made for a seamless transition to nonfictional storytelling.

“I had always been telling the story, but they were my experiences co-opted through the lens of somebody else's, be it political or social,” she said. This time the lens would be her own.

For Russo-Young, working as both the director of the film and one of its on-camera subjects was challenging at times. In addition to her mothers and sister, the film features interviews with friends of both the family and of Tom Steel, Russo-Young’s biological father who died of AIDS in 1998. Most notable is Cris Aguedas, whose view of the court case directly opposes Robin and Russo’s, and is the reason for the ending of their friendship.

Mitigating these tensions while retaining a sense of objectivity during interviews took practice and patience for Russo-Young. “I didn’t want to injure anybody more than they had already been damaged in the process of the story itself. I had to remind myself, ‘just listen, be open, and try to not judge as it's happening, but to hear it.’ It took a lot of energy on my part to refuse to go to a place that I would automatically go to. The movie was all about tracking my arc of subjectivity,” she said.

While talking with Aguedas and others about the details of the lawsuit was difficult, Russo-Young also described the experience as “completely riveting as a filmmaker,” one that will inspire how she approaches her work in the future, whether she returns to narrative filmmaking or explores documentary. “Life is really short and I want to make work that reflects who I am and what I believe in,” she said.

Russo-Young cites her time at Oberlin as formative in cultivating her identity and beliefs as an artist, “a great time for [her] to start practicing what [she] wanted to do.” From a young age, her interests spanned from acting to photography to video production, and came together during college.

At Oberlin, Russo-Young participated in what she calls “a little bit of everything,” including a film project that explored her custody case through a retelling of the fairytale Little Red Riding Hood, featured briefly in Nuclear Family.

The project was groundbreaking for Russo-Young. “That was my first exploration of this entire narrative, and that was done at Oberlin in the art building as a performance. It was two nights, all of my Oberlin friends came, and it was an independent project that I did, I think as a Winter Term,” she said, also describing college as a time to create “bad work.” “You don't get to do better work until you do bad work. That's what I was doing—but it wasn't bad, it was just young,” she said.

When asked about advice for aspiring directors and producers, Russo-Young did not hesitate, noting that film school is not for everyone and that her colleagues in the film industry come from all walks of life with different experiences.

“What unites those experiences is continuing to try things out and do the work in all different kinds of ways and in all kinds of environments,” she said. “That's what's so great about Oberlin specifically, is that it allows you to try a bunch of different experiences, crafts, and creative endeavors and see what you like and respond to them.”

Hispanic studies and politics major Leila Miller ’16 recently transitioned from criminal justice reporter to foreign correspondent at the Los Angeles Times. She recently moved to Mexico City to begin her new position covering the news in Mexico and Latin America. 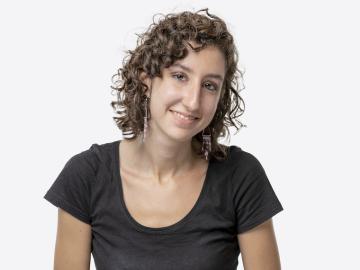