Deeply troubling events of the past year have brought into focus numerous patterns of inequity that have existed across our society for generations.

One such pattern is the elevation of the Western tradition in the formation of the classical music canon, an approach that has traditionally propagated an air of elitism and—more important—set the tables for ongoing marginalization of musics arising from other traditions.

Oberlin will address these issues and others in “Decentering the Canon in the Conservatory,” a virtual symposium scheduled for 1:30 p.m. Saturday, February 6. Part of Oberlin’s celebration of Black History Month, it will be broadcast live on Oberlin Stage Left, the conservatory’s virtual programming platform.

“Decentering the Canon” resulted from extensive conversations held by conservatory faculty over the summer of 2020—talks dedicated to crafting a thorough and thoughtful response to the murder of George Floyd, Breonna Taylor, and other tragedies linked to systemic racism.

“Discussions of canon and anti-canon have been familiar parts of humanities discourse for a number of decades,” says Steven Plank, a longtime professor of musicology at Oberlin. “However, if a familiar discussion, it is also a discussion that has taken on new urgency at a time when issues of social injustice and racism have risen to dramatic and tragic heights. Questions of how canon is formed and our allegiances to it ultimately say much about who we are; what we choose to teach and how we choose to teach it say much about who we want to be.

“This symposium gives us a chance to continue an important thread in our discourse and respond to a dramatic urgency.”

It will feature four panelists of note, each of whom will offer a brief presentation before taking part in a question-and-answer session moderated by Chris Jenkins, Oberlin’s Associate Dean for Student Academic Support and the conservatory’s liaison to the Office of Equity, Diversity, and Inclusion. The panelists are as follows:

Imani Mosley, assistant professor of musicology and music history at the University of Florida and author of “Say Her Name: Invocation, Remembrance, and Gendered Trauma in Black Lives Matter” in Performing Commemoration: Musical Reenactment and the Politics of Trauma. (pictured, bottom right)

Kira Thurman, assistant professor of Germanic languages, literatures, and history at the University of Michigan and author of the forthcoming Singing Like Germans: Black Musicians in the Land of Bach, Beethoven and Brahms. (pictured, bottom left) 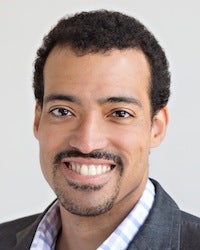 “This conversation is extremely relevant to the average music listener,” says Jenkins, an active violist who is pursuing a DMA in viola performance at the Cleveland Institute of Music and a PhD in musicology at Case Western Reserve University. “We’re talking about what is programmed today and why, and we’re also talking about much of what is sold and packaged in concert halls everywhere.

“Among other things, it will be interesting to find out where there might be points of disagreement among our panelists. We haven’t really gotten to that point in the conversation where even more progressive thinkers may not have consensus.”

“Decentering the Canon in the Conservatory” is a Richard Murphy Musicology Colloquium, part of an ongoing series developed at Oberlin in 1992 by Professor Claudia Macdonald to foster an exchange of ideas on music between colleagues in the conservatory and college. It is named in honor of Richard Murphy, who taught music history at Oberlin from 1946 to 1978. The series was expanded in 1997 to welcome outside speakers.