Gail Schwieterman ’13 will spend a year investigating conservation efforts to curb the overfishing of sharks and other marine life around the globe as a 2013-14 Watson Fellow.

Schwieterman, a December 2013 graduate from Columbus, Ohio, will divide her year equally by volunteering and conducting research in Costa Rica, South Africa, and Hong Kong. She plans to develop relationships with people who work in the industries most closely associated with marine life—commercial fishing, the food industry, and tourism—to learn how communities are responding to overharvesting. She also hopes to venture into nonscientific writing to communicate conservation issues to the public.

The Thomas J. Watson Fellowship is a highly competitive, national scholarship program that awards graduating seniors a one-year grant of $25,000 for independent study and travel outside of the United States. Schwieterman is one of 40 fellows selected from a pool of more than 700 candidates and 148 finalists.

A lifelong Ohioan, Schwieterman’s interest in marine ecology is relatively new, but her interest in conservation is deep-rooted. At age 14, she began volunteering at the Columbus Zoo and Aquarium, working to educate the public about conservation issues through games, creature interactions, and classes. She continued working at the zoo for four years, eventually leading discussions about great ape conservation issues.

As a biology student at Oberlin, she took full advantage of winter term and summer research opportunities, leading to a study abroad program in Ecuador. She spent a winter term at an elephant sanctuary, learning how habitat degradation and poaching are current threats to elephant populations around the world. In fall 2011, she studied abroad in Quito, Ecuador, and San Cristobal Island, the easternmost island in the Galapagos Islands. While abroad, she assisted several graduate students with their research on sea lions,and helped the national park do surveys on fish and marine invertebrates.

When she returned from studying abroad, Schwieterman spent winter term at Woods Hole Oceanographic Institution, where she assisted with a project studying how ocean acidification affects larval oysters. And last summer, she completed a research internship at Hatfield Marine Science Center in Oregon.

Shwieterman will begin her Watson journey in Costa Rica, working with Pretoma, a marine conservation and research organization, on its fishery monitoring program. She chose Costa Rica because it’s a historical hotbed for shark finning controversy, with more shark fins coming to port there than in any other country. She says Pretoma has agreed to let her work on the ground, to interact with fisherman on a daily basis to monitor their catch and ensure that regulations have been followed.

“Although conservationists often vilify them, fishermen are stakeholders who can contribute to conservation efforts,” Schwieterman says. “By using their local ecological knowledge to inform management strategies, fishermen have been involved in creating some of the most effective marine management plans throughout the world.”

At her next destination, Schwieterman will investigate the marine tourism industry in South Africa, an ideal habitat for migratory great white sharks. She will volunteer on cage diving boats with several different tour companies to see how each markets shark-watching differently, and to find out if and how they promote conservation and education as part of their tours. “Since South Africa relies heavily on the tourism industry for its economic stability, I am eager to witness how individuals in the marine tourism business acknowledge their reliance on the health of marine ecosystems, both for personal and national economic success.”

Schwieterman will end her year in Hong Kong, one of the most densely populated areas of the world where seafood is a diet staple. There, she will shadow members of the Hong Kong Shark Foundation while also volunteering on a public awareness campaign to promote the banning of shark fin soup. “Because my work will involve local students, community organizers, and food distributors, I will be able to see firsthand how current public awareness strategies are effective or could be improved.”

Watson fellows begin their year in the summer. Schwieterman is filling her time with an internship at Mote Marine Laboratory in Sarasota, Florida, where she is studying shark behavior and post-release mortality rates in commercial and recreational fisheries.

She says it is a profound honor to be chosen by the Watson committee. “I’m incredibly grateful for this opportunity,” she says. “I’m eager apply the skills that I learned at Oberlin, both academic and interpersonal, during my Watson year.” 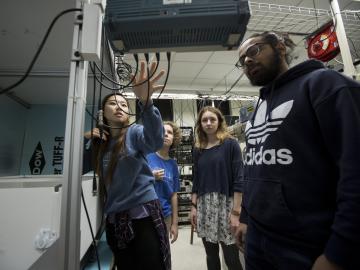