Unpacking and ordering books may sound mundane, but when you’re doing it at one of the oldest and largest art museums in the United States, things tend to be a bit more interesting. Anna Feuer ’14 is currently working as the senior acquisitions assistant in the Technical Services department at the Art Institute of Chicago.

Growing up in Chicago, Feuer, who majored in art history, spent a good deal of time at the Art Institute, and completed an unpaid internship in the Technical Services department the summer after her sophomore year. After graduating from Oberlin, she moved back to Chicago and got another unpaid internship, this time in the Archives. “I just really wanted to get my foot back in the door. At that point, I obviously wanted to go into library science, and that was the position that was available at the time,” said Feuer.

Shortly after starting in Archives, Feuer saw a job posting for a position in the Technical Services department. After applying online, she went down to the department to reintroduce herself and tell the department head that she applied. “I went down there and caught up with her. She asked how I was doing and what I was doing for work, and I said that I’m currently working in retail, but I just applied for the library assistant position here. She got this kind of funny look on her face and we continued speaking, and at the end of that day, I got a call from Human Resources saying that they wanted me to come in for an interview,” she says. “It was a very quick process after that.” About a half a year after, Feuer was promoted to her current position. “Let that be a lesson,” says Feuer emphatically. “Always remind people that you exist, because it can work very well in your favor.”

Starting her first year at Oberlin, Feuer worked in the Clarence Ward Art Library. “I went and spoke to Barb Prior, the art librarian, and told her that’s what I wanted to do,” Feuer says. “I wouldn’t have gotten my job if it weren’t for her. It wasn’t just a job to have in school. She gave me more meaty work than just doing circulation or some of the other jobs the student workers do. I did some bibliographic work and some ordering, and things like that which were directly applicable to the job I had.”

Beyond her work in the art library, Anna stage-managed shows in the Theater department, which she credits with helping hone her organizational skills. “It was fun, and that’s why I did it, but it ended up being really helpful in that regard. Organization takes practice!” says Feuer.

Feuer plans to stay in Chicago with her current job indefinitely. “I feel good where I am now. Honestly, my plan is to do what’s best for me,“ says Feuer. “This has been a lesson I’ve been trying to learn for a number of years. You have to prioritize what’s right for you.” 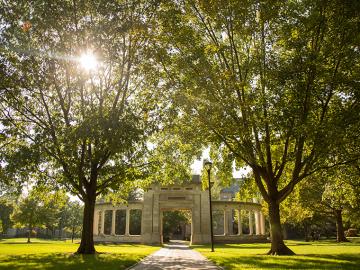