After years of writing for and reading the blogs, I've learned that there are some things Oberlin bloggers like to write about more than others. A brief scan through the archives tells me that we love the concerts, the professors, and the Ginko kittens, among other things, but if there's one thing that we tend to write about more than anything else, it's the people, stupid.1

Obies are special. We aren't all alike, we don't agree on everything, and some of us can be jerks, but we all have something in common because we chose Oberlin - an often wonderful and always weird little college. I've made some amazing friends at Oberlin, friends who challenge and excite me, who understand me and make me glad to be alive. As I discovered last month, all of these things also happen to make Obies excellent travel partners.

At the very least, they make my friend Ronni (she/her/hers, Gender, Sexuality and Feminist Studies major/History minor, and fellow former resident of Kahn second floor north) a great travel partner. I met up with Ronni after traveling to Berlin and Hamburg by myself. The solo leg of my trip was great and I loved getting to see a bit more of Germany, but things definitely got more fun when Ronni came into the picture.

Our adventure began in Copenhagen, where Ronni's studying public health through the Danish Institute for Study Abroad. We did most of the standard touristy things - checked out the Dutch-style architecture at Nyhavn, got coffee in Christiania, and saw the Little Mermaid statue (so little). We also took two day trips outside the city, the first to see a 9-year-old girl's handball game (less weird and more fun than it sounds), and the second to visit Louisiana, an amazing modern and contemporary art museum. In between the sight-seeing and handball we did a lot of catching up. After 10 months apart and not enough time spent skyping, we had a lot to talk about.

In fact, we were still catching up when we arrived at our next destination, Stockholm. I loved Stockholm, but not for the reasons I expected to. The Stockholm of our minds was full of minimalist architecture, open-faced sandwiches with strange ingredients, and amazing art museums. The Stockholm that we found was full of gorgeous, centuries-old buildings in sorbet colors, an open-faced sandwich or two but also some delicious food2, and amazing museums of all kinds.

One of the most notable was Skansen, an open-air museum that calls itself "Sweden in miniature." While it wasn't our favorite museum in Stockholm, it was the only one with bears. 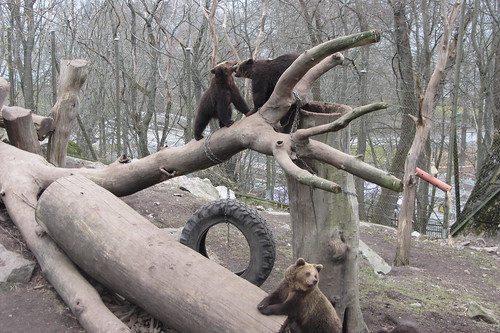 It probably sounds ridiculous, but we absolutely lost it over the bears. Why? Well, it was a combination of the undeniable cute factor and the fact that the real-life bears reminded us of a song sung by a teddy bear that a mutual friend told us about freshman year. The song is truly strange and doesn't make a lot of sense in or out of context (lyrics include "tap your heel on the dance floor / make 'em scream / make 'em look!") but that made it that much funnier at the time.

Our last stop was beautiful Amsterdam. We both fell in love with Amsterdam almost as soon as we arrived, and how could we not? The city is full of beautiful buildings, young, liberal people, and a pervasive sense of freedom - sort of like Oberlin if Oberlin had canals and a red light district. Unfortunately we didn't schedule a lot of time there, so we packed our few days pretty full: full of museums, full of silliness, and full of photo ops. 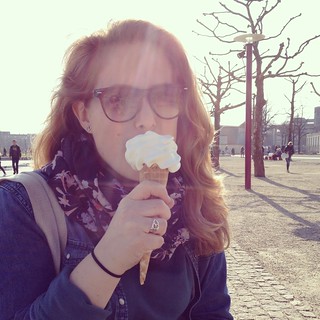 Yes, we were very touristy tourists, but we were having so much fun that we weren't particularly ashamed of it. In fact, before taking the above photo, Ronni said, "I can't stand to watch these tourists taking photos, she says while opening Instagram to take a photo of her friend eating ice cream." If that doesn't say, "resigned to being a tourist," I don't know what does.

When we parted ways in the Amsterdam train station, we knew we'd be seeing each other in a few weeks, since Ronni had finalized her plans to visit me in Munich while I was in Berlin. Her visit was great. I was only just starting classes, so we had plenty of time to go out to eat, explore the city and to visit the zoo, where two polar bear cubs were recently put on display. Plus my study abroad program held a Bayern-themed party where she got to meet my American friends. When she left, though, that was it, I knew I wouldn't see her or any other Obie until August at the earliest. As sad as that made and still makes me, the past year has shown me that my best Oberlin friendships are strong enough to survive time spent outside of the weird and wonderful Oberlin bubble.

2Including lingonberry everything and the best and cheapest tacos I've had in Europe. (By cheapest I mean that they were free. I won free tacos for Ronni and I. I am very proud of this.)

3Where I won myself a free beer. I was clearly on a roll during this trip.

My lovely long-lost Denmark! Lingonberries! Free food! Good travel buddies! I love everything about this post! You are the cutest!

I agree, I think the most common theme of the Oberlin blogs is that Oberlin people are a pretty excellent reason to attend Oberlin (that's why I wanted to go there, so consider me a sample size of one).

Regarding tourism: having lived and summered with my parents in Hawaii, there's something to be said for the most memorable parts of a location being appealing to both permanent residents and tourists alike... if people didn't love it, it probably wouldn't be a tourist spot. (She says, as she realizes how many Hawaiian beach sunset photos she's taken in the past ten years.)