Because I'm not in the US, I expected that I wouldn't really celebrate Thanksgiving. After all, without my family and a massive turkey, what kind of Thanksgiving could I really have? As it turns out, I had not one, but two lovely Thanksgiving dinners this year.

The first dinner was hosted by the US Consul General in Munich, William Moeller, who invited the JYMers to an early Thanksgiving dinner after meeting one of our program directors last year. Frankly, none of us knew what to expect when we heard that we'd be having dinner with the Consul General. Would there be other dignitaries there? Would we be eating at the Consulate itself? Would there be pie? As it turned out, we ate at his (gorgeous, government-owned) house with the Consul General, his family, and one other person from the consulate. And yes, in addition to turkey, mashed potatoes, sweet potatoes, green beans, and stuffing, there was pumpkin pie with real American whipped cream. Plus, we got a little presentation from the Consul General about what the consulate does and why the US still has a specific consulate just for Bavaria.1

The second Thanksgiving dinner was a potluck on the day itself. Thanks to the efforts of some other JYMers, we ended up having our dinner and doing some of our cooking in the restaurant at the top of my building. Even knowing that we'd have space to eat, I was pretty worried about this dinner. Most of us aren't exactly experienced cooks and it wasn't entirely clear what everyone was bringing. Plus, people don't eat a lot of poultry here and turkeys just don't come as big in Germany as they do in America. Yet somehow, we ended up with two turkeys, a huge variety of sides,2 and multiple pies - an altogether amazing meal that left us all feeling full for the rest of the day.

When things were winding down, someone suggested that we go around the table to say what we're all thankful for. I usually dread this portion of the meal because I feel pressured to say something very heartfelt or very witty (preferably both) but this year, it was easy to come up with things to say. I'm thankful for this city, which is so beautiful and quickly becoming another home. I'm thankful for my friends here in Germany, who allow me to be myself, and thankful for my friends in the US, who have kept in touch in spite of our busy lives. And of course, I'm thankful for my family. Without their generosity, I could've never gone to JYM or even gone to Oberlin. They have given me so much, and I can never thank them enough. 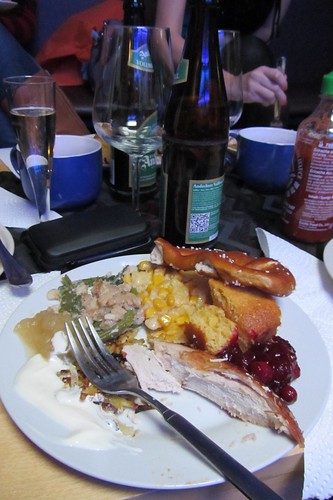 1 The answer to this question was pretty interesting but pretty irrelevant.

2 Including some delicious latkes that I made for Thanksgivukkah.