When I was a little kid, The Wizard of Oz was my favorite movie. I loved it so much that I went through a phase where I refused to wear anything but my Dorothy costume, complete with the famous ruby red slippers and basket with a stuffed Toto inside. 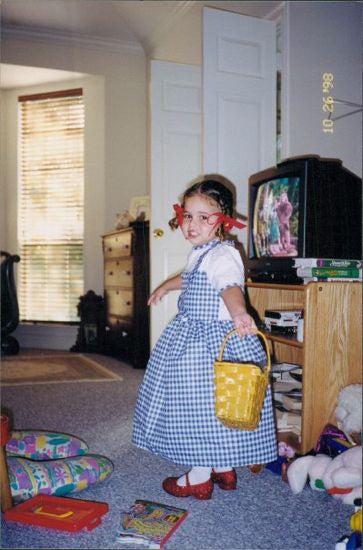 Judy Garland is smaller than I thought. Oh wait, that's just me!

I loved the songs, the costumes, the bright colors. But it took me until recently to really understand the film's main message: there's no place like home.

As much as I've been enjoying my time at Oberlin, fall break just could not come fast enough. So you can imagine my absolute joy when I boarded the shuttle for Cleveland, ready to return to my beloved hometown of Houston.

Lots of thoughts ran through my head as I walked through the airport, mostly trivial things like "Why did United charge me for a bag, isn't it my god-given right as an American to be entitled to one free bag?" But the biggest thought of all was what Marty McFly would refer to as heavy.

This is the first time for me that a vacation has constituted me going home.

Yes, there is the concept of the staycation, but I'm referring to the fact that my new break time was what used to be my everyday life.

Another truly heavy thought was when I realized I would not be returning home the same person I was when I left.

And how much of a good thing that was.

At Oberlin, I no longer have that chip on my shoulder that being an outsider gave me. High school wasn't a terrible experience, but I never really felt like I fit in. Not to say I was ever made fun of or treated terribly. I just didn't mesh with the vibe. I went to a small private Christian school that was super preppy and homogenous. I am not preppy or religious or a Republican, so I always felt like an outsider. Oberlin is comprised of people who were probably also outsiders in their schools, smart artistic weirdoes waiting for their chance to shine. And now here we all are, together! I joked once that the official catchphrase of Oberlin was "you do you" but it's true! You don't always understand what someone is doing or why they're doing it, but you support them all the same. I feel like for the first time in forever (sorry, even I am not above including Frozen references) I'm somewhere I can truly be myself. Oberlin is kind of a magical place where people's differences are celebrated instead of being demonized. I've heard (and used) the words "heteronormative," "problematic," "intersectionality" more than ever before. I've made new friends, become a better French speaker, learned how to survive without a Target five minutes away, and started enjoying eating salads. These aren't drastic changes (except for the salad part), but they're enough to make me feel like a new woman.

But enough about high school or even Oberlin for that matter!

I have never been more excited to get off a plane than getting off the plane to see my wonderful parents after about 2 months apart. Seriously, I felt like a kid on Christmas morning. My mom and I had a Love Actually style embrace, complete with us both running from opposite sides of the baggage claim to hug each other. The break was incredibly lovely, filled with Gilmore Girls and cookies and a lovely day at Hermann Park (who knew Houston had a Japanese garden?) and eating out at my favorite restaurants. I got my nails done with my mom. I went to the science museum with my dad, where saw Faberge eggs and a documentary about how big is the universe. I went to the Menil Collection and saw art. I saw a play at my high school. I read Lena Dunham's new book and learned all about Oberlin 10 years ago (spoiler alert - it's just as weird as you remember it, Lena). The break was also filled with some new changes too, the biggest one of which was not, surprisingly, my new haircut. 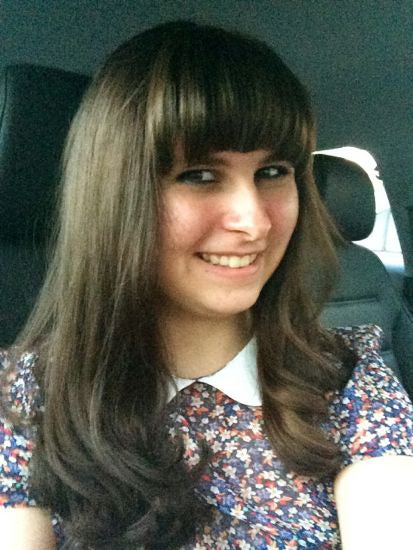 I mean, I got bangs. BANGS!

The biggest change of all was feeling like a guest in my own home. Not in the sense that it was anywhere foreign to me, seeing as I felt perfectly at ease. But living out of a suitcase in your own room with a set start and end date? It's not a concept that I took to easily, especially seeing as that concept is more or less permanent. Yes, I get to come home for breaks and holidays and things, but what about after college? I'll never again live with my parents like I used to. My enjoyment of the break was overshadowed by the knowledge that I wasn't really here to stay. I was there for a week and then I had to go back. In fact, only being able to go home for a week may have been worse than if I had just not left Oberlin at all. I was doing perfectly fine before I left, just barely homesick. I got used to being on my own, not seeing my parents every day. Then I got a taste of being home, a little reminder of all the wonderful things I left behind. And then it was taken away.

My fear of going back to Oberlin seems kind of counterintuitive, seeing as I have been having the time of my life here. Why was I dreading the return, even though I have wonderful friends, interesting classes, and plenty of things to do?

Because my two favorite people in the world wouldn't be returning with me.

To be perfectly honest, Oberlin's lack of a Bert and Barbara Davey is pretty much the only thing holding it back from being the greatest place on Earth.

And I won't lie and say that I'll eventually get over it. I know I will for a while, but it won't be forever. See, that's the thing about homesickness. It comes and goes at weird times, at random times. It could be in the middle of class, or when you see food at Stevie that your mom also makes and you eat it and it's not as good (how could it be?). It could be while watching a movie or when you're hanging out with your friends or when you hear a corny joke that you know your dad would appreciate. It sucks. There's no sugarcoating it.

But the nice thing about homesickness is that it makes you really appreciate home. Houston has never looked lovelier to me, my bed has never felt more comfy, and my mom's cooking has never tasted so good.

While boarding the plane to Cleveland, I was listening to my iPhone with my headphones in when the song "Homeward Bound" by Simon and Garfunkel started playing. At first I felt a little bit of resentment toward the electronic device. Ha ha, very funny, it's ironic because I'm not actually going home, I'm leaving home. But than I began thinking about what makes a home. To me, a home is somewhere you feel comfortable and you're surrounded by people you love. There's no place quite like my home back on Locke Lane with my lovely parents and other familiar things, but come to think of it, there's also no place like Oberlin, where I feel accepted and loved. Oberlin may not be my one true home but it is a home. And for now, that is enough.