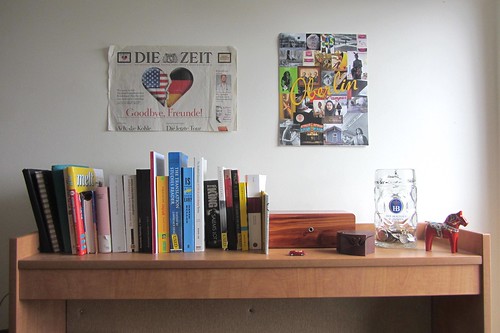 After 15 months away, I'm back in Oberlin and moved into my apartment in Firelands. I've unpacked my bedding, my kitchen things, and my ukulele, but I'm just beginning to unpack what I have always referred to as my tchotchkes. My tchotchkes are the little decorations that have made my various college rooms feel homey and most of the ones in this particular room come from the past year in Europe. There are the gifts my friends got me - a large map of Munich and a Maß from the Hofbräuhaus that they all signed - the printed and matted photos of mine that were in a show at the university, the Dala horse I bought in Stockholm, and the dozens of postcards from seven of the eight countries I visited during my time abroad. But I didn't just bring tchotchkes back to Oberlin with me, I also brought some intangible things, new words, new experiences, and of course, lessons learned.

I could just let these good things live in my head and in my room, but because I'm a blogger, I've decided to share them with you in the form of five pieces of advice.

1. Be confident when trying something new.
A lot of my American friends had problems with Germans responding to them in English even if they began an interaction in German. I had this problem at the beginning of the year, especially with service workers, and didn't really understand why. My accent was pretty good, I didn't usually make grammatical mistakes when I was just buying a coffee or a pretzel, so why were people speaking to me in English? Eventually I figured out that mistakes weren't the problem. Germans (and Austrians and Poles and Swedes...) switch to English when they sense hesitation or discomfort, so I had to sound confident. Eventually, sounding confident turned into being confident and by April I often had people thinking I was German. 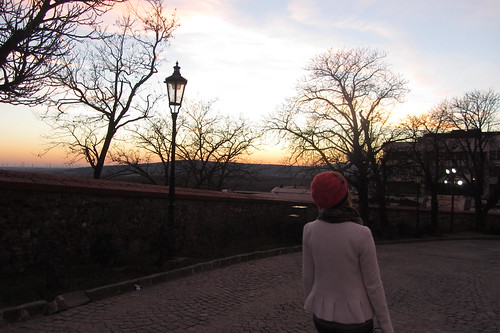 Taking in one of the most beautiful sunsets I've ever seen in Slovakia.

2. Step outside your comfort zone.
Before arriving in Bratislava, Slovakia, I had only ever been to English- or German-speaking countries. While there are elements of culture-shock even in countries where you know the language, I could never have anticipated how alienated I would feel when I looked at signs and got no meaning from them and couldn't understand any conversations I heard on the street. My travel companion and I tried to learn some Slovakian phrases, but we never managed to remember the words for "hello," "please," and "thank you" for more than a few minutes at a time. Even so, I had a great time in Slovakia. I ate delicious traditional food, met interesting people, and got my first taste of Eastern Europe, all of which made feeling intensely foreign worth it. Not knowing the language was definitely a barrier, but finding out that it was one I could surmount was pretty cool.

3. Keep a journal.
I've been writing in a journal regularly since April 2013 and started writing daily while in Germany. That's not a very long time, but it's long enough to be able to vouch for the benefits of journaling. I'm pretty introspective and I have the unfortunate tendency to think things to death and make myself really anxious. When I put my thoughts down on paper, I free them from that cycle of over-thinking and often end up making connections that I would've missed otherwise. But even if journaling doesn't help you be less anxious or more organized, I can guarantee that a journal will serve as a great record, whether it's of your time in high school, at Oberlin, or abroad. 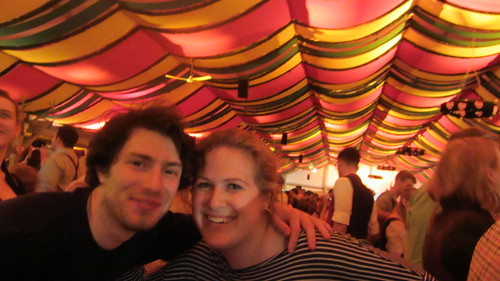 My friend Devin and I celebrating Bavarian-American Friendship Day. I had been feeling stressed that day, but went out anyway - no regrets.

4. Try to balance work and play.
When you have way too much on your plate, sometimes you need to say, "screw it," and hang out with your friends. This may sound weird and, believe me, if my one-year-ago self knew I was writing this, she'd think my present-self was losing it, but hear me out. Work will always be there, packed schedules will always be there, and unfortunately for me and anxious people like me, stress will probably always be there. But your friends might not always be there in the same physical space as you - especially if you met those friends abroad. So when you can, put down your planner for a while and go rollerblading, swim in the creek, have an amazing conversation, go to the festival, make memories! You almost certainly won't regret putting off your work for a bit, but you will regret never going to one of Munich's famous flea markets. And plus, I find that after I take a break, I feel energized and actually ready to get my work done. 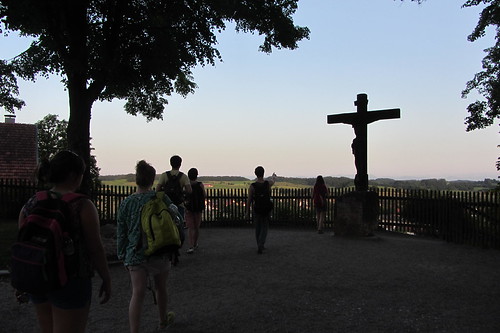 A group of JYM-ers and I finishing a hike up to Kloster Andechs.

5. The world is bigger than you or I know, explore it!
One of the wonderful things about my particular study abroad program was the people it attracted. Because the program lasted a full year and involved enrollment at Germany's largest university, we JYM-ers tended to be highly independent and adventurous. We traveled, took interesting classes, had a variety of internships, jobs, and independent projects, and have a wide variety of plans for the future. Some of us want to move back to Germany, whether for grad school or to work. Some of us are looking into Fulbrights in Germany or farther afield. Some want to go to grad school in the US or somewhere else in Europe, some of us want to travel, some of us have no idea. We have a lot of options available to us, but it's all because we've consciously decided to be open to them.

Of course, there's an element of luck and privilege in all this. We're privileged to be able to pursue higher education in the United States and we're lucky to study abroad, but there are lots of people who have those opportunities and choose not to take advantage of them. That's ok of course, everyone wants different things, but I know that because I took those opportunities, I'm aware of so many more options than I was before. In short, the world seems so much bigger now than it did before I went to Munich, which I suppose was the point of studying abroad all along.