Oberlin is a great place to have a stroll. Of course, I thought this to myself first on a pleasantly perfect summer morning. The sun wasn't quite scorching and the chill that eventually came to characterize the early hours was a thought in the distant future. As of now, mornings are decidedly cool. As of soon, they will be decidedly uncool, and I dread that day. None of this changes the fact that Oberlin is and will remain a great place to have a stroll.

You see, strolling is not walking. To me, at least, there is an important distinction. "Walking" implies foremost a goal or a destination. "Strolling" seems to indicate the action itself is the intent and what follows at the stroll's end is secondary. In this sense, it seems contradictory to say that I stroll to my classes or to my dorm, however the path along Tappan Square or across the Wilder Bowl seems to bring out a different dimension to simple ambulatory motion.

My morning begins with a stroll to practice at the Conservatory. At around 7, the campus is beautifully still and sometimes there's a mist hanging in the air. Just this morning I observed how the trees along Professor Street were gradually relinquishing their green for gold. As they fluttered to the ground, I was rather glad to notice how they were replacing the infernal acorns that normally pelted my head. There's no particular hurry to this time of day, making it ideal for strolling and thinking. I'm one of those thrice-cursed Morning People who enjoys rising at an ungodly hour — the time of morning where every single noise is loud and sleeping roommates suddenly seem threatening — but I recommend everyone try to stroll at this time at least once. 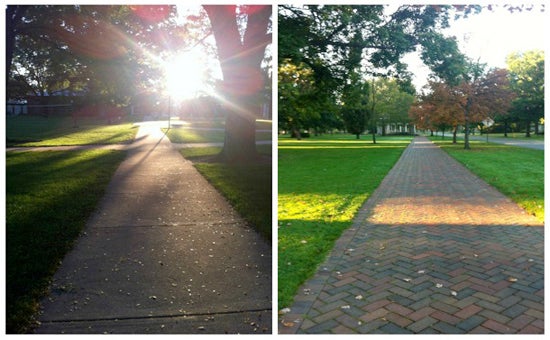 An afternoon stroll is a different experience. The campus is now very much awake (except for those snoozing on the remarkably comfortable grass in Tappan Square). There is lively discourse; there are raised voices; there are languages from at least three different countries; there is music. The area inexplicably smells like horse. On the way to my destination, I've encountered some people from my various classes walking or biking to their own and a pleasant conversation or a friendly nod is exchanged. The bustling intersection of commuters is a sight in itself, an intricate dance. 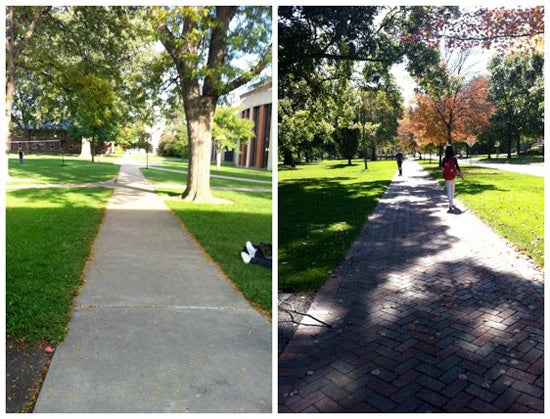 Nighttime strolls, usually from the Con to Barrows, are my favorite. The sidewalks are just empty enough to feel solitary but not lonely. A quiet peace more satisfied than the morning's seems to have settled on the streets (at least on weeknights). On what is usually my final stroll of the day, I pass Finney Chapel and sometimes hear the drone of the organ intoning certain doom or diminished chords or something equally as epic. It lends a certain feeling of purpose to my stroll, as if I have my own soundtrack. As the sounds recede with my passing, I'm once again left with the glow of the streetlights and the tranquility of the end of the day.

So - stroll, I say! Stroll even if you have five minutes to arrive at your destination. Stroll at night with your eyes pointed up at the stars so that you don't notice you're strolling into the pavement. Trip gracefully and stroll on. Stroll with new friends or perfectly alone. Stroll to feel the wind in your face or the chill in the air. There's always something to notice, something to reflect on, or something to participate in if you just slow down and stroll. It is for this reason that I've eschewed bikes and recommend everyone else do the same, at least for a little while. The shift from walking to strolling is simply a change in focus from destination to journey.

About the music: I picked this piece because I feel it is so reflective, but here is what the composer himself has to say: "I wrote Tenebrae as a consequence of witnessing two contrasting realities in a short period of time in September 2000. I was in Israel at the start of the new wave of violence that is still continuing today, and a week later I took my son to the new planetarium in New York, where we could see the Earth as a beautiful blue dot in space. I wanted to write a piece that could be listened to from different perspectives. That is, if one chooses to listen to it 'from afar,' the music would probably offer a 'beautiful' surface but, from a metaphorically closer distance, one could hear that, beneath that surface, the music is full of pain..." Incidentally, on my stroll today, I saw an art installation in the Wilder Bowl reflecting the most recent violence in the Israel-Palestine conflict; one can make of that what they will.

The music itself employs a scordatura second violin, meaning the strings have been altered from their usual E-A-D-G configuration to something more exciting (in this case E-A-D-E); it adds to the otherworldly feeling of the work. In his own words, he "lifted some of the haunting melismas from Couperin's Troisieme Leçon de Tenebrae, using them as sources for loops, and wrote new interludes between them, always within a pulsating, vibrating, aerial texture. The compositional challenge was to write music that would sound as an orbiting spaceship that never touches ground." The result is "that Tenebrae could be heard as the slow, quiet reading of an illuminated medieval manuscript." His music draws inspiration from folk music and from his own cultures. They are by turns distant, intimate, intense, and haunting, but always feature an attractive and lingering lyricism.

Golijov, a Jewish-Argentinian composer, is still around to talk about his works and create more today, and I think the music world is better for it. Other compositions include 'Azul' and 'Three Songs for Soprano and Orchestra,' based off a text by Emily Dickinson.

Oberlin meanderings are so nice, and the light here is SO beautiful. You captured it beautifully in your photos!

If you've not made it to the arboretum yet, I recommend it, especially in the next two weeks. Autumn! And there are really good paths!

I'm pretty committed to cycling around Oberlin, but I had my bike stolen during sophomore year which meant that I spent a lot of time walking around campus. Eventually I came to see the charms of walking, or strolling around Oberlin. I think you captured them really well in this post. And I loved that you mentioned the horsey afternoon smell, I have no idea where it comes from but I definitely notice it every day.

Also, I'm very much enjoying Tenebrae. I can definitely see why you said it's good for a morning, but I'm also hearing the sadness that Golijov refers to.

Lord, I'm so looking forward to reading your future blogs! I used to love strolling Night Oberlin - particularly right down the middle of the deserted streets. Makes for some incredible conversations. In fact, I once had an important conversation with a dear professor of mine who was doing strolling office hours at the time! Keep strolling, keep writing, please.