Warning: large chunks of this post are plagiarized from myself! If you want the originals, check out my Tumblr.

In case anyone was wondering whether I'd fallen off the face of the earth... I'm not dead, I'm in London! Specifically, I'm sitting in a Starbucks about two blocks from the British Museum, taking a break from all my reading...

I've been here for about three weeks now (London, not Starbucks). My original plan was to blog about it from the beginning; that seemed like a great idea until I actually got here. I've never lived in a place so big and monumental and diverse. In the absence of classes (term didn't start until October 4), I've had a lot of time to relish the surreality of life abroad: exploring, drifting, absorbing everything, like a very small piece of naan in a very large bowl of curry. (I've been eating a lot of Indian takeaway.) While I'm here I'll be writing a lot about life in London, the culture shock of leaving Oberlin, and the decision to study abroad. For now, though, I'll just explain where I am.

Lots of Obies study here on the Oberlin-in-London program. I took a different path across the pond: I'm an affiliate at University College London, which means that for three months, I'm a real student at a real British university. Since most people in the States haven't heard of UCL, here are the CliffsNotes:

And it's approximately the size of ten Oberlins. Gulp.

My home base at UCL is the Institute of Archaeology. I knew the IoA was good before I came to London -- that's why I applied to study there -- but I didn't appreciate just how good. It's about the size of the Conservatory at Oberlin, and enjoys a similar reputation in its field. While I'm here, I get to hang out in an 80,000-volume archaeology library, play with teaching collections of over 60,000 artifacts, and study in some of the best archaeological laboratories in the world -- along with 500 other archaeology students. It's an extremely friendly department, and people are pretty laid-back; for the last week and a half they've been plying us with free tea and beer. (If tea is the UK's national beverage, beer is an extremely close second.) 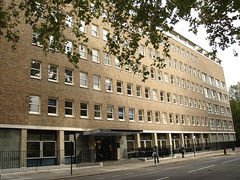 The IoA is this big brick building that towers over the rest of the street. (Buildings in London really like to tower.)

To put all that in perspective, at Oberlin, there are three archaeology majors in my year; we don't even have a departmental office, let alone an eight-story building with its own library and labs. I love doing archaeology at Oberlin (another thing I keep meaning to blog about)... but you can understand why the opportunity to spend a semester at UCL is mindblowing.

It's worth mentioning that up until I got here, I thought I was done with college orientation for the rest of my life. Nope... I've spent the last week going to lectures with titles like "Making the most of your university education", along with a whole horde of other affiliates. On the bright side, I got two weeks to traipse around London: the semester here didn't start until the first week of October, by which point my friends back in Oberlin were already careening toward midterms. Now that I've survived a week of classes, I'm finally starting to get into the routine of real life as a student in London.