It's hard to say that any one co-op job is the most important. Around OSCA, we swear by non-hierarchy; we don't like to pick favorites. But if we did, near the top of the heap I'd put the breakfast cooks. 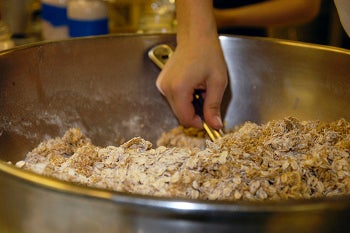 Breakfast cooks are chronically underappreciated. Students tumble out of bed, pull on a clean shirt, and sprint to class without giving food a thought. Forget it, no time now -- they'll make up for it with a midnight snack. For those of us who are breakfast fiends, though, the cooks have the power to make or break a day from the very beginning. We know which ones will drag out a pot of rapidly-congealing oatmeal and disappear. We also know which ones treat their job like a sacred duty, staying up till three or waking up at five -- sometimes both -- to bring us masterpieces of co-operative morning chow: coffee cake, cinnamon rolls, apple oat muffins, spinach quiche, sesame tofu scram, pancakes.... 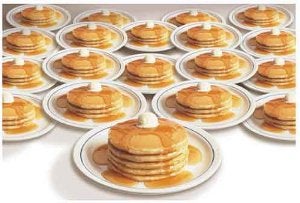 I don't have any photos of Harkness pancakes -- usually they're gone before anyone thinks to pull out a camera. So you'll have to make do with this terrible stock photo instead... or come visit us for breakfast sometime!

It was midterm week. I'd been up incredibly late at night studying for an exam -- then "incredibly late at night" become "mindbogglingly early in the morning," as I finished up three study-abroad applications. I'd woken up to sheets of rain and endless gray Ohio sky. Now I was stumbling downstairs to grab something to eat before my nine o'clock class. So tired. So many problem sets. So much rain. FML.

I opened the door to the kitchen, and there was the breakfast cook in bathrobe and slippers*, barely visible behind a precarious stack of steaming pancakes. It took me a moment to identify the song he was playing, drowning out the sound of the rain: Bob Dylan, singing "Shelter from the Storm."

It had to be a hallucination. Clearly my overworked, underslept brain had finally snapped. I took a deep breath, inhaled fine particles of flour and the cozy scent of maple syrup, felt the cloud of heat emanating from the stovetop. "You know you're perfect, right?"

He grinned. "Want a pancake?"

I settled down and the morning crowd began to gather. People I'd lived, worked, studied, and played with for two years clustered around the dining room tables, wearing pajamas and clutching mugs of tea. I watched them pass around newspapers, compare problem sets, chat about spring break plans. I thought of the three stamped envelopes on my desk, the applications expressing my sincerest desire to ship myself off to foreign lands for a whole semester. Come on, Eli. Why would you ever want to leave this place?

Cozy. Sleepy. Blink. Squint. The world came into focus, and I recognized the figure standing over me: it was Laura, an old friend and fellow co-oper, magnificent flautist and equally gifted cook. True to her word, she was holding a plate of pancakes. Wait, I'm definitely not in Harkness anymore...

...but wherever I am, there are Obies with pancakes. Sweeeet! 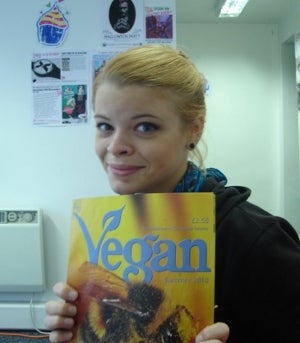 Laura and I have made it our mission to check out all the vegan restaurants in London.

The thing I've figured out since going abroad is that leaving Oberlin sucks; but when you do leave -- and most people eventually do -- Oberlin starts to follow you everywhere. I'm not talking about nostalgic memories, or the ways that Oberlin Has Changed Me Forever. I'm not talking about the barrage of e-mails from my advisor, the registrar, and ResEd reminding me to plan for my return, like an astronaut preparing to re-enter Earth's atmosphere. Nor am I talking about the crowd of friends constantly on Gchat, more than happy to distract me from coursework, sleep, and sightseeing.

What I mean is that even thousands of miles away from Oberlin, there are Obies everywhere. I am beginning to think of Oberlin as a secret society, or a religion, some bizarre underground cult. Once you discover that it exists, you can't go anywhere without running into fellow initiates.

Which is how, a continent away from Ohio, I fell asleep in a cuddle pile of former co-op-mates, and woke up to the smell of fresh pancakes.

Laura and I both lived in Harkness last year, and we applied to study abroad at the same time. But somehow we managed not to figure out that we were both going to the same place until we were actually in London. And when I say "the same place," what I mean is that by complete coincidence, we ended up living around the corner from each other. It took us about 36 hours to locate each other and set up a two-person veggie-buying, food-cooking, and Oberlin-gossip-sharing collective.

It was only another few days before the parade of itinerant Obies began. Ary, an '09 alum now working for my favorite folk group ever, came through with the band on their first UK tour. Andy, an old hallmate now graduated and living in Edinburgh, stopped by for a few days on a trip back to the States. Lindsay, a friend studying abroad in Paris, came up on a weekend trip. And, of course, my favorite Oberlin alum -- Dad '78 -- paid a weeklong visit over Thanksgiving. 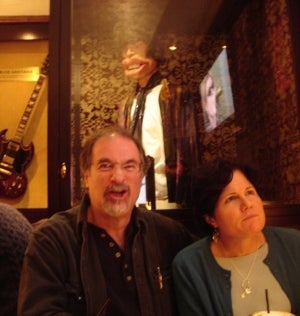 Dad busts out his Mick Jagger face at the original Hard Rock Cafe in London. I'm too old to be grounded, so I can get away with posting this photo!

Don't get me wrong, people in London are awesome. But it's really nice to see a familiar face, to talk to someone who shares my longing for womb chairs and knows what a knock means.** And, as Ary put it (while we were on a bus to check out a non-hierarchical, volunteer-run, co-operative cafe on the other side of the city), "Oberlin people have the best taste in adventures!"

Then there are the people I've never met before, and probably will never see again. In the middle of a crowded Tube station, a stranger pointed to my OSCA hoodie, winked, then disappeared. A few days before I left the country, I went hiking at home in Vermont; at the top of the mountain, the first thing I heard or saw was a woman gesturing enthusiastically toward my Oberlin sweatshirt. "I'm a third-generation Oberlin alum," she exclaimed, "and my grandson is applying next year!"*** (I guess the moral of the story is to wear lots of college gear.)

While you're in Oberlin it nurtures you, it protects and challenges you, it changes you. And it follows you when you leave: even in a huge city on another continent, I just can't help but run into Obies. In the middle of the hectic anonymity of London, it's a little bit of shelter from the storm.

* and an apron and a hairnet -- health code is serious business!
** In Oberlin's co-ops, making a "knocking" gesture with your fist means you agree with something. (see also...)
***So if you're a fourth-generation prospie whose grandmother lives in Vermont, and you happen to be reading this... hi!

So..were any of these pancakes vegan, perhaps? Because that would be very awesome. Even more awesome would be vegan cinnamon rolls, coffee cake, or apple muffins, but I'll take what vegan breakfast imagery I can get.

Oh, all the food I was thinking of was vegan (even the quiche) -- I don't like to blog about food that I don't eat! I just got tired of typing the word "vegan" over and over :-)

So, Erika Oba is convinced that all Obies have magnets in them that attract other Obies to them. I have run into random alums on hillsides in San Francisco, just from wearing an Oberlin sweatshirt.

Magnets? I can believe it. I think some prospies have them, too -- it would explain a lot.

Bro, reading this makes me so happy. I am a breakfast cook; the only reason I am not underappreciated is that I brag ceaselessly about whatever breakfast I am planning to make for days beforehand! I want to do it second semester, too; prepare for bagels, apple crisps, doughnuts, and other delightful things.

Oh my god. You had me at doughnuts. O.O

Love this entry. Miss you heaps.