This semester I have been in London studying globalization and immigration on the Danenberg Oberlin-in-London program. This incredible and unique opportunity has been written about by bloggers before, and so the only additional piece I will say about it is that there is additional financial aid available. London just may be the most expensive city in the world, but there are grants given specifically to those accepted to the program to cover the excess costs of living and dining in London. Now, that doesn't make London cheap, but it just may make it so you can swing it. And trust me, living in Europe for four months is worth it.
I would never have been able to come if it weren't for the scholarship fund the Danenberg Alumni created, so I'm passing the good word along.

I have loved every second of being abroad. I miss Oberlin a lot, but this semester has been absolutely transformative. From standing atop Blackheath Point at night looking at the lights of London, to standing under the Eiffel Tower during spring break, this semester has been series of events I never thought possible to happen to me. 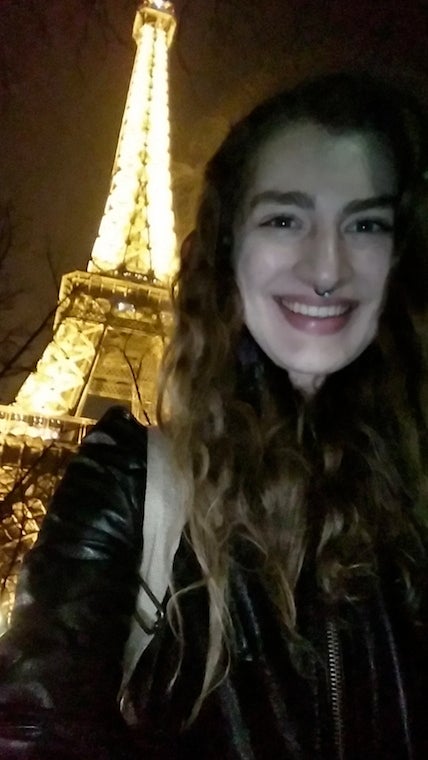 Photo from the view from Blackheath and a sellfie with the Eiffel Tower.

In going to all of these places, I have been reflecting on what it means to stand in a place, to have your body take up space there, and the privilege and work it takes to be able to do so. I've started a photo series entitled My Feet Were Here that I'd like to share a few photos from here, intersected with some thoughts behind the project and what it means to me to be where I am now. They're a little disjointed, but read it as if these were my thoughts and reflections as I stood in these various places. 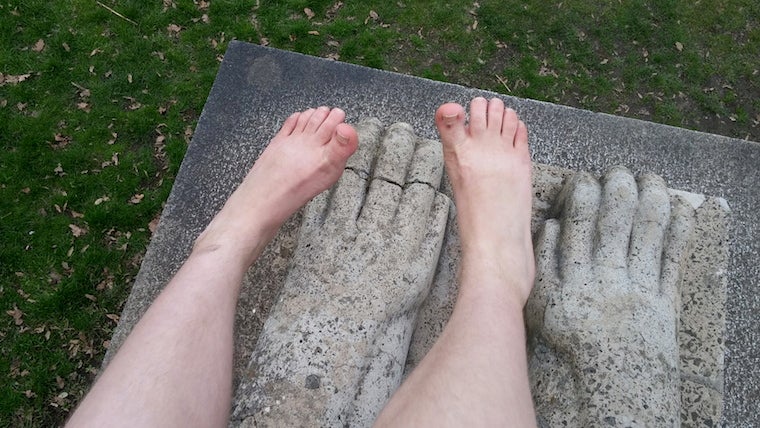 My feet at the Crystal Palace where the Great Exhibition was held in London in 1853.

In 2007 I was not even sure that I would go to college. My father didn't, my brother didn't; my family by no means had the money to send me to college. If I wanted to go, it would have to be something I worked hard for, and a lot of the learning about higher education would be on me. But I knew that I wanted to get out of Lansing, and college seemed like the only good option to do so. 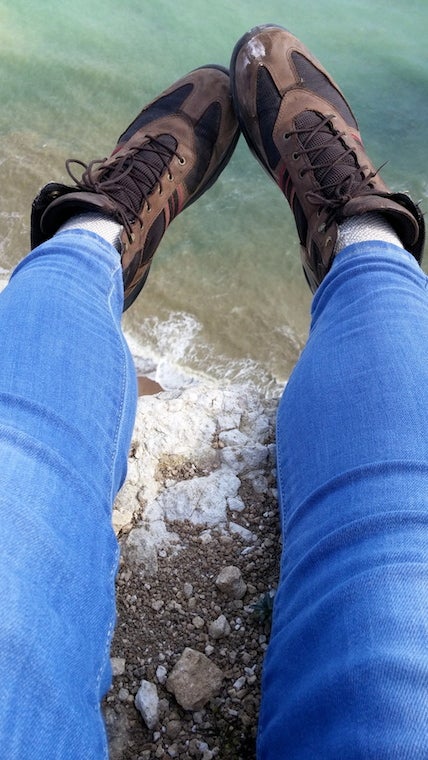 My feet dangling off the edge of the Cliffs of Dover.

In 2010, after years of 4.0s, ballet, jazz, band, soccer, a Sophomore Class Presidency, and a load of other activities, I got a scholarship to boarding school. This scholarship meant that college wouldn't be a dream for me, it would be a reality. Where I grew up, college was not even an expectation. Suddenly, it was a given. This was the first moment of many I have lived of class accumulation. It was also the first time I left Lansing. I had successfully "made it out." My feet were taking me to new ground. 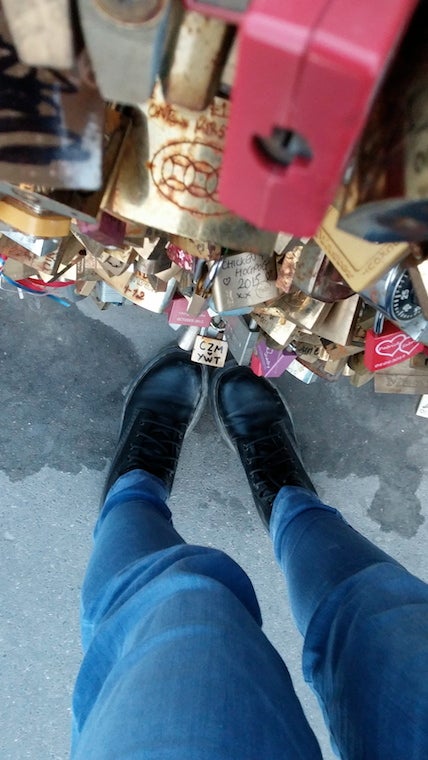 My feet at the famous Pont des Arts, or the Love Locks bridge in Paris.

In 2012, I was accepted to Oberlin College. Oberlin had been the dream for four years (ever since I read this blog post, in fact). I was overjoyed knowing I would at last set foot on an elite, dynamic, and quirky campus such as this one. And then I had to leave the campus that I loved a lot because sometimes this school is not excellent as supporting mentally ill lower-income students. And then I came back because I love this place and my family needs me to get this degree. And this past Fall, I left again. But this departure to study abroad was a much happier one. 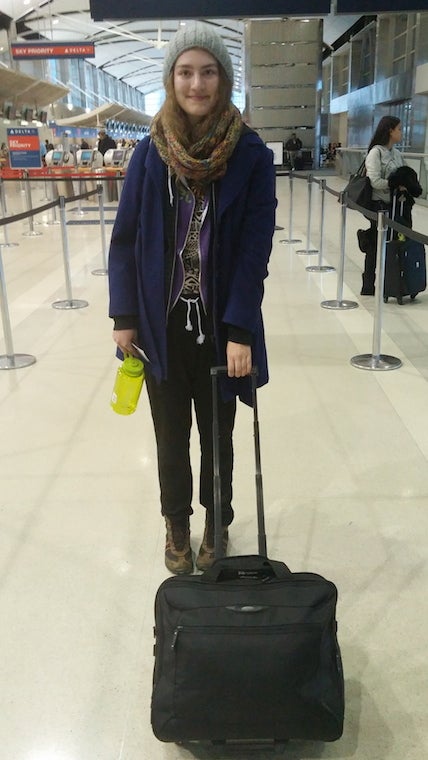 And here, in 2015, are my feet boarding a plane to another continent.
All I could think on the plane is how far from home I was, in every sense of the phrase.

What does it mean to have stood in these places? What does it take to stand here? And what does it mean to "make it"? On the streets of London 6,000 miles away, or on Oberlin's campus, which might as well be 6,000 miles away from my hometown, these are the questions I ask myself. Studying immigration, I think of the borders and the barriers preventing people from 'making it,' from being able to stand here. And I think of the less palpable borders in education that caused me to be only one of a handful of students to go to college from Lansing. And I wonder, does getting out even count as making it? Have we done anything if we do not return to the communities that built us, the schools that educated us, the families that loved and sacrificed for us? Sometimes I laugh because I think it took me leaving and flying across the world to understand just how important Lansing is to me. For being a place I spent my whole life trying to get away from, it has been foundational in creating who I am. It is the very foundation on which I stand.

Oberlin is often very homogenous and if you do come here, I hope two things for you. First, that you take advantage of the privilege that this institution will grant you and study abroad. See communities outside of Oberlin. Experience the versatility and difference this world has to offer. Second, that you think critically about what it means to have your feet stand here. Question who and what has allowed that to be possible. Why is it our feet and whose feet are missing? 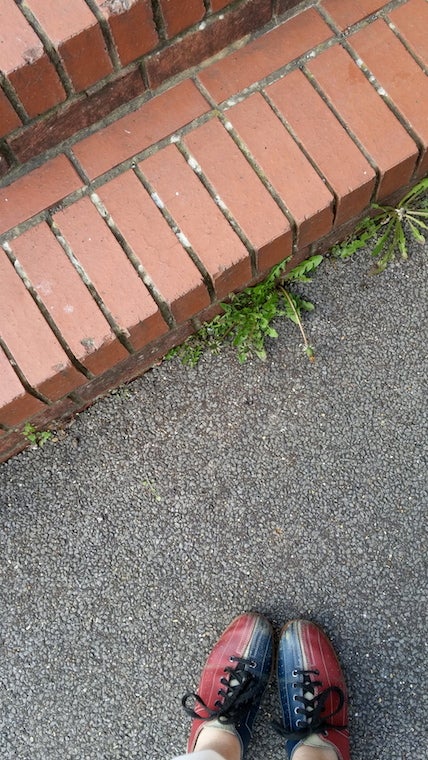 This is me standing in front of the church in Bicester, England where my maternal grandparents were married in 1954.

My grandfather was stationed here during the Korean War. My grandmother, only one year older than me, left the United States for the first and only time in her life to get married here. I would like to thank this place for creating the possibility of my future. And I would like to thank my grandparents, my mother, and my father for making my future possible. It is only standing on their shoulders that I am able to see these things and ask these questions.