Title explanation: My last Winter Term project, working with the Striking Viking Story Pirates, has had hidden long-lasting rewards. The group did a show at the Kennedy Center as part of the pre-inauguration bash, containing a story written by a DC based kindergarten class called Mr. Hedgehog Visits the President, which was a song-and-dance number with princesses and hedgehogs and a big sparkly sign that indicated the Barack Obama character. I'm not totally off my rocker when I write these things, I promise.

Reason 6,345 why being in Oberlin for Winter Term: sometimes cool things happen in Ohio, even when it's cold.

A good example: President Obama is visiting Lorain County Community College this Friday, which is twenty minutes away if you don't miss your turns (more on this later), for a town hall meeting with business leaders, local business owners, and community members to have an open discussion about the current economy and the changes they hope to see over the next few months and years.

Chris Gollmar and I were planning on covering it for the Oberlin Review, but neither of us had a car to get there on Friday. This became a problem sooner than we wanted; even though the event was free, it was ticketed. Tickets were to be given out starting at 6pm on Tuesday, but the line started much much earlier.

Oh, the horrors! Chris was cooking dinner in Fairkid tonight and I had no car, but luckily Chris was on the ball and had already started looking for rides on the Oberlin Classifieds. Another Obie contacted Chris, a senior named Alex Krohn, who was available this afternoon. Around 4pm, Alex and I headed to LCCC.

As many of you students may remember (or something to look forward to about college, you prospective students), Facebook is a wonderful way to meet future Obies before the school year actually starts. I was Facebook friends with many folks before coming to Oberlin for freshman orientation, with the hopes of meeting them all. Maybe we had similar music and movie tastes, or liked a joke that the other had shared on an Oberlin discussion board, but at the time, anything was a good reason to request a possible future friend.

However, orientation is only so long and once classes start, meeting everyone is a wistful thought and not a priority anymore. About three months into my first semester freshman year, I did a friend purge on Facebook; if I hadn't met them yet, I deleted them, and if we met again, then friends again we shall be.

Alex fell into this category. We didn't meet within those first few months, so off he went in the purge. We must have met up since then, but in the last few years, Facebook friends just aren't as hot a commodity as real friends. So we kept on living our separate but similar Oberlin lives, which just so ended up in Alex's car on the way to get Obama tickets today.

It's funny to see how parallel the Oberlin experience can be without convergence, but I don't know why I was surprised. Alex and I were both in OSCA (he was in Pyle, I was in Harkness, and now we're both in BBC), we both danced to WOBC and ridiculous music mixes while doing crew, and we had bad kale (but have learned to make good kale since then, we even shared the recipes). Alex is a biology major, which is what I wanted to do when I got here, but I have since shifted away from that. He studied in Vietnam last year, and was amazed by geckos and ate unique tropical fruits, things both familiar to me since my move to Hawaii, where Alex had visited before, too. Apparently we both had spent a good amount of time at Bucketkickers shows and have a deep love for Stevie Wonder.

Sometimes you just end up with two really passionate Obies in the same place. It was a pick-me-up on an otherwise gray and dismal day.

Well, we ended up getting lost (I blame our heated talk about the biology department for missing our exit the first time) and got to the Stocker Center for Fine Arts and Humanities around 5pm, where there were hundreds of people waiting in line. I got a ticket that proved my presence in said line, giving me the number 460. Alex ended up with 486. The tickets started at 100, and every individual in the line could get up to two tickets, so these numbers did not bode well.

Yoshi, my new housemate, recent Oberlin grad and newly enrolled student at Lorain County Community College had gotten to the Center much before us since his classes started this morning. He had ticket 160, which placed him at a much better spot in line than us.

A mere ten minutes after we walked in the door, the officials stopped handing out the tickets for the line, saying that 600 tickets had been given out and that exceeded the number of seats in the field house. Oops. Good thing we hadn't gotten too lost. I heard later that other Obies showed up after the ticket line had ended... I'm so sorry, guys!

So now began the long waiting game. We heard that 600 tickets were available, 200 tickets, 400, an unknown fluctuating number that only the White House knew about. Either way, 460 did not seem like the best number. Eventually Yoshi's number was called, as well as some other Obies who had collected themselves in a corner of the lobby. They then filled out registration cards and got in the official ticket line. Soon they had embossed, barcoded tickets in hand. How lovely.

The place was swarming with press as well, video cameras from local news teams and photographers everywhere. The Obies had set themselves up perched on a table near the beginning of the official post-registration, pre-ticket line, which also meant we had a good view of all the excited folks being interviewed. Would we be that lucky?

Around 7:15pm, an announcement was made that the box office was positive that any number above 330 would probably not get in the door. However, they invited everyone waiting in the lobby to join them on Friday in the auditorium, where there would be live streaming video of the event happening in the field house. Alex called his friend who he could see on the upper landing, asking if he could have her extra ticket, since she was number 260. Yoshi had luckily offered his second ticket to me, which is awesome for photography purposes. Sadly, Chris will not be able to be in the main auditorium (unless someone, anyone has an extra ticket to pass on!), but will be watching the streaming video next door.

Regardless of what Obama does now, it's what he set a precedent for during election season, election day, the inauguration, and even now that makes me proud to have been around during the beginning and the progress of this era. What did Obama do? He brought people together, not just the diverse group at the Stocker Center this afternoon, but two very alike people who had never talked before as well. 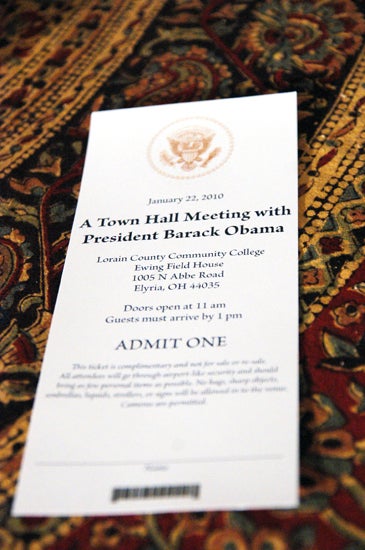 Shinyyyyyyyyy ticket. Thank you so much, Yoshi.

It is most definitely a real ticket. We were joking with some folks while the numbers were being called that the tickets would be scanned into one's arm and you could transfer the second ticket only via a secret handshake. This is much cooler, and since it has a barcode on it, I think we might be able to keep them!

Generous individuals (not just friends, but hurray for them too) and good timing are my two best friends.

It should be excitingly fun!