If there's an interest of mine that gets greeted with eyebrow-raising and expressions of surprise, it's my extreme love of basketball.

For the record, I am by no means a great basketball player. This blog isn't meant to give you the impression that I'm willing to take on some challengers in one-on-one. I've got a pretty good midrange shot, and a decent three-ball, but my dribbling, driving and finishing capabilities are all lacking. Nonetheless, I still hit the gym to work on various shots and moves when I've got the free time (Wow. I love saying the phrase "hit the gym" so casually). I still have dreams of one day being able to do any of these.

What I love most about the game of basketball is the sense of bravado that encapsulates the sport. Basketball is a showman's sport, one where flashiness and flair rule the court. It's the thought of completing a 360-layup in traffic or getting a fastbreak block that drives a player.

My girlfriend, despite loving the video game NBA Jam, can't seem to understand my basketball fever. But this passion for hoops has deep roots. My dad is an avid fan of basketball, loving NBA basketball and reminiscing about his street-playing days as a youth in the Philippines. My cousins - mostly from the Los Angeles and Las Vegas areas - are all die-hard Laker fans who love to boast about their 17 championships and storied history. My other cousins from Toronto (remember everyone, I have a very big family) conversely enjoy griping about the constantly sad state of the Raptors. My uncle was even a professional baller in the Philippines. I know, not the most prestigious honor considering that the average center in the PBA is probably around 6'7", but a pretty bad-ass distinction nonetheless.

As for me, I was weaned on basketball by my father when I was little. However, I didn't start appreciating basketball with the intensity I do now until I was 12 or so. I began playing more and watching more NBA basketball - specifically the New Jersey Nets.

For those of you who are lacking in basketball knowledge, the New Jersey Nets are unfortunately one of the sadder franchises throughout the NBA. Always characterized as being cast in the shadows of the crosstown New York Knicks, the Nets are a franchise starved of any NBA championships, and are one year removed from an embarrassing 12 win season (an NBA season is 82 games long. Ouch). Despite their lack of success, I remain faithful, waiting for the day that the Nets rule the basketball world. Yet I'm one of the few patient enough to do so.

Yet my attention to Nets basketball came at an opportune time with the Nets' acquisition of sure-to-be-Hall-of-Fame point guard Jason Kidd. Jason Kidd singlehandedly turned the Nets franchise around, carrying an otherwise mediocre team to back-to-back NBA Finals. These years were far and away the shining moments of New Jersey basketball in an otherwise dim, dark tunnel of blocked shots, missed lay-ups and costly turnovers. My love for basketball coincides with a love for Jason Kidd, and his throwback Nets jersey hangs proudly in my dorm room.

The sorry state of the Nets is probably one reason why I love my intramural basketball team - the Sharkness Blazers - in spite of our impressively bad win-loss ratio. If you can remember back to my blog on intramural soccer, well, the Sharkness Blazers are more of the same. We were probably notorious for being the joke team of the intramural basketball league. We rarely had the tallest player on the court at one time, and if we did, he was also probably the skinniest player on the court (Max and David, I'm looking at you guys). We were also probably the only team in the league that abided by the rule of having one girl on the court at all times. I did, however, create a freaking awesome logo for the team, though we never mobilized to get them printed on shirts. There's always next year... 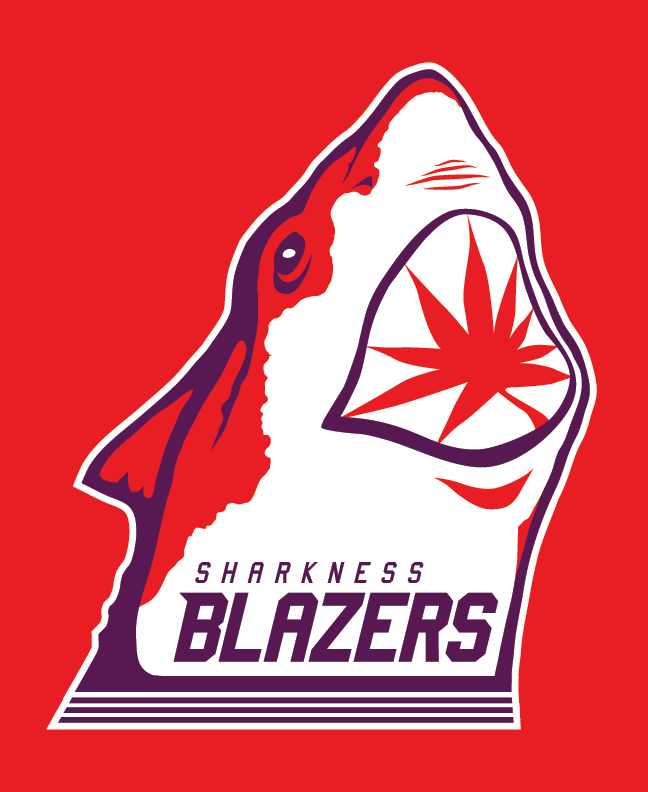 In an incredibly corny way, Oberlin has changed my perception of the NBA. The NBA as currently constructed is a top-heavy league: there are a handful of really good teams that can realistically win the championship, but the rest of the league is mediocre to just plain rotten. When LeBron James ditched Cleveland to create one of the most unfairly athletic trios in basketball (joining Dwyane Wade and Chris Bosh of the Miami Heat), I was one of the first to cry out in disdain. It was the inner Obie in me that wanted a league of more parity, where every team can go to battle with each other and feasibly compete for a title. I suppose it's that desire for equality that drives all of us here at Oberlin, whether on the court or in the courtroom.

That shirt design is great. I hope to see them in real life for the next intramural league season!