This weekend marks my official five-year Oberlin reunion, so please forgive me if this post is filled less with helpful admissions information and more with reminiscences from a recent alum.

One of the entertaining things about staying in Oberlin post-graduation has been watching how certain things that started during my student days have developed into time-honored traditions whose origins have been lost in the dim haze of a lack of institutional memory. The Big Parade and OCircus! are two fine examples of events that began during my student days at Oberlin and have subsequently become so well-established that current students are often surprised to learn that these traditions were started less than ten years previously.

Now, I can't claim any credit for either of those two events (although I did have a minor part as a stilt-walker during the circus one year), but I recently learned that I do, in fact, have an enduring and completely anonymous legacy at Oberlin, in the form of the proposal llama. Tess recently stated that no one knows where the proposal llama came from, so I thought I'd better set the record straight. 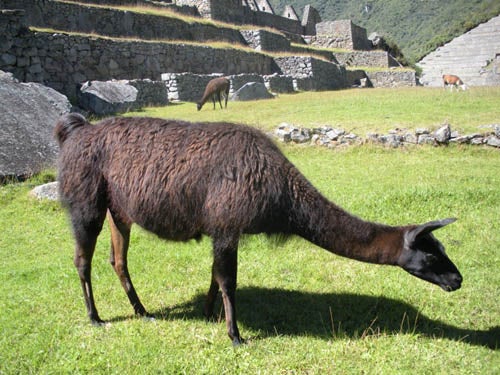 This is a real llama that I met in Peru last summer.

For the uninitiated, the proposal llama is one of several esoteric hand symbols used in the Oberlin Student Cooperative Association (OSCA) during co-op discussions. These include things like putting your hand in the air to get on the list to speak, "knocking" when you agree with something that has just been said, and voting with "thumbs up," "thumbs down," or "thumbs sideways." (Fun fact: when applying for my current job in Admissions, I was invited to give a short presentation on the topic of my choice. I described the co-op decision-making process, complete with hand symbols, to my now-colleagues.) 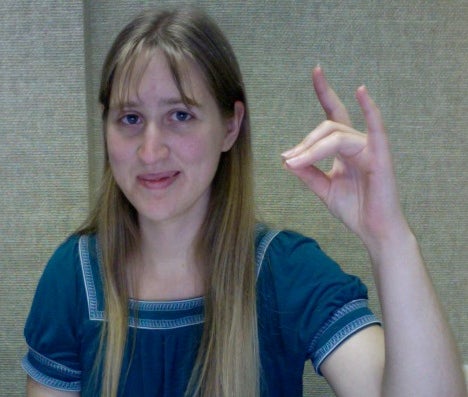 This is the proposal llama that I unwittingly released on all of OSCA.

Back in the day (about six years ago), the co-ops had no designated hand symbol for members wanting to make a proposal during a discussion. If you had a proposal, you simply raised your hand to get on "stack"1 and had to wait your turn while all the people ahead of you argued back and forth over an issue that your perfect compromise proposal would resolve to everyone's satisfaction.

After four years of sitting through co-op discussions and repeatedly observing discussions going on much longer than necessary because people with important proposals had to wait their turn to speak, I decided it would be much more efficient if people with proposals could jump to the top of "stack" and present their proposals right away. Having risen to a position of moderate power as the moderator of my co-op's discussions, I was able to convince my co-op, Harkness, to go along with this course of action.

Of course, having decided to give priority in discussions to those with proposals, we needed a unique hand symbol that proposers could use to get the moderator's attention. Several options were suggested, but they were all dismissed as being too similar to other hand symbols already in use. Luckily, at that time, my circle of friends was going through a mild obsession with the llama hand symbol. For the record, llamas are great--they can be happy, sad, or covalently bonded. Your llama and your friend's llama can fight, kiss, or share nesting grounds in their native habitats on top of the heads of particularly curly-haired people. I did have one friend who maintained that this particular hand symbol was meant to represent a coyote, not a llama, but our frolicking llamas just ignored her increasingly less frequent protestations.

So, in that context, a llama was the obvious choice for the new co-op hand symbol. It was distinct, recognizable, and easily formed. Soon, I was well on my way to saying things like "we have a proposal llama from Molly," and joyfully presiding over a new age of more efficient co-op discussions.

A semester later, I graduated and moved on to a new stage of my life, the one where I had to remember to not use co-op hand symbols while talking to people, because that would be weird. Meanwhile, my proposal llamas apparently multiplied and took over OSCA like an invasive species with no natural predators.

Now that it's been five years since I graduated, there are no current students who were around back when the proposal llamas originated, and apparently no one knows where they came from. I even heard a rumor last year that they originated in Keep Co-op (Harkness' pretend arch-rival). Ma'ayan tells me that at least half a dozen people have asked her where the llamas came from, and she's been begging me to share the story of their origin ever since I told it to her last week. So, Ma'ayan, this one's for you. Hope you enjoyed it!

1. Stack is the highly inaccurate name for the list of people waiting their turn to speak during discussions. It's actually a queue, for all you fellow computer science students, but for some reason my proposal to rename "stack" to "queue" never really caught on.

Speaking of how quickly presentism invades the historical record (so that very recent innovations seem to have always existed), it's quite amusing to me that (as your footnote suggests) for you the word "queue" refers to computer science. Everyone knows (LOL) it's what you stand in to catch a bus in London.

I should have an intelligent response to this, but all I can think is "OH MY GOD IT IS SUCH AN HONOR TO KNOW YOU PLEASE SIGN MY OSCA HOODIE". Thank you for giving us the gift of the llama, and for demonstrating once and for all Harkness's superiority to Keep :)

David, I do of course know that a queue is a line to our friends across the pond, and that's why the computer science data structure is named the way it is (because it functions like a queue -- first in, first out). But you're right in that, having never caught a bus in London myself, a queue is first and foremost a data structure to me.

Aha! Thank you for enlightening me at last! (Also, I didn't know Circus was so recent either.)

My brother recently came home from school chanting "Happy llama, sad llama, mentally deranged llama!" with appropriate hand symbols. My mother has adapted this to include the Dalai Lama. Clearly, llamas have power.

Tess, I'm glad to be of service! I was telling my co-op friends I saw over the weekend about the prevalence of the proposal llama throughout OSCA, and they were delighted to hear that we had created such an enduring and anonymous legacy.

(And now I'm trying to figure out what would be the appropriate symbol for "mentally deranged llama"...)

I don't know how OSCA operated prior to the llama. Seriously. Using the llama, among other co-op hand signals, are a habit I still have to kick now that I'm in the real world. I knock during meetings, ask clarifying questions in conversation, and propose that we close stack on arguments. OSCA is ingrained in my soul.

I can confirm that Sarah's obsession has not ended, and that she finally gave in and acknowledged that it is a llama and not a coyote. I have since learned from this ignore her and keep doing things and she'll eventually give up method. It has served me well.

I'm going to pay for that if she ever reads this comment...

Will! Thanks for the comment. Also, congratulations?? We should talk.