They always say you end up like your parents. I can't say I didn't try. To avoid this, during my junior year of high school I flipped through the Fiske Guide to Colleges with fervor, referenced it like an encyclopedia, and visited nearly twenty different schools. Oberlin was so close to my nose, I nearly missed it.

I grew up surrounded by Oberlin stories. My parents both went to Oberlin in the eighties, when the only computer at the school took up the entire basement of Mudd. My dad was a free-spirited, somewhat socially awkward, art history major who donned a look not unlike Napoleon Dynamite. He wore bright blue socks and left his shirt sloppily un-tucked under his sweater. He lived and ate in Harkness and was a vegetarian, processed food-hating, granola-munching foodie before that was the "hip" thing to do. My mom was a bit more mainstream (though maybe not by Oberlin standards): a politics major (then called government), an honors student who was serious about her studies and, according to her, the first choice babysitter for Professor Ron Kahn's kids. Before coming to Oberlin she had never met someone who didn't eat sugar or refined flour, such as my dad. 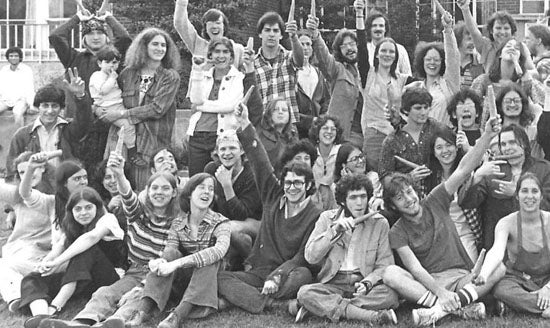 This is Harkness co-op circa 1982, showing off some delicious carrots. My dad is the guy third from the right side of the picture and the two people to his left are my parents' closest college friends.

Needless to say, many dinner table discussions began with the phrase, "remember back at Oberlin when..." I can't even begin to count how many times I have heard my mom complain that my dad managed to get through Harkness without washing a single dish or how many times my dad has told some variation on how his friends used to spray paint his rickety bike and stick it up in a tree while he was in class — just for fun. My personal favorite is the story of when one of the cooks in Harkness interpreted a tablespoon of allspice to mean put a tablespoon of every spice on the shelf into the dish. I knew the names of Oberlin buildings before I had even seen the campus, and I knew which professors were legendary before I even became a student.

But Oberlin stories always felt like my parents' stories. When I was younger I used to think Oberlin was "uncool" just because my parents went there (and what teenager doesn't think their parents are a little on the nerdy side?). I laughed at their stories, mocked them even; Oberlin was a fixture in the past, a place frozen in the 80s and filled with my parents' friends and people just like them.

Then came junior year, and that terrible, exciting, tedious, and seemingly never-ending college hunting process. For a long time, I knew where I wanted to go to college. A serious student and a competitive skier, I decided Dartmouth, with its Ivy League reputation and Division I ski team, was the perfect school for me. But as I was slowly suffocated by a flood of glossy pamphlets and admissions brochures I began reconsidering. Coming from a large, disorganized, public high school, I was ready for a change. I wanted to go somewhere small, where I could recognize the people I passed on the way to class, and where I could actually talk to professors. I was sick of red tape and feeling like a faceless number. Don't get me wrong, I absolutely loved my high school — it was one of the most diverse and unique institutions I have ever witnessed and an incredible growing experience that I wouldn't have traded for anything else. But after four years of having to really push to get the classes and programs I wanted, I was ready for a little spoon-feeding and handholding. I visited a million small liberal arts colleges up and down the east coast. I was intrigued by their beauty, loved the ivy-covered brick buildings and white steeples; they felt so collegiate and regal. The students were nice and the academics seemed rigorous, but nothing really "stuck." The fall of my senior year of high school I gave in to one last visit to small-town Ohio.

Oberlin "stuck." It just did. I recently met with some old family friends, the daughter of which is considering applying to Oberlin. They asked me what I would say in an essay about why I would choose to come to Oberlin. I gave them my honest answer: I have no idea. I told them about all of the cool things Oberlin has to offer: Winter Term, great academics, open-minded students, ExCos, co-ops, etc. That's all stuff you can read on the admissions website and its not why I would pick Oberlin over another great liberal arts college. What I like about Oberlin is more of a feeling that has something to do with the friends I've made and the way I sometimes step back and realize not only how much knowledge I've gained here but also how much of a better thinker I have become. It might sound a little corny, which is why I told them, "I don't know" — you really can't accurately translate those intangible values into words.

Anyways, I chose Oberlin (even applied early decision!) despite my previous resolution not to turn out like my parents. What has been most interesting for me has been how relevant my parents' stories have become. I have not only followed my parents to Oberlin, but I have, to some degree, followed in their footsteps at Oberlin as well. My freshman year I lived in Barrows, the dorm adjacent to Noah, where my parents met during their freshman orientation. Like my dad, I eat and live in a co-op, not Harkness, but Keep, and have certainly experienced silly cooking goofs. I am a politics major like my mom and have even had two classes with Ron Kahn. Even my dad's bike story has repeated itself: last year two of my friends played a practical joke on a third friend by hiding his bike in the shower.

I never really think about the fact that my parents probably walked the same route to King or consider the possibility that they had the same favorite study nook in Mudd. I have made Oberlin my own, made my own Oberlin stories, and have been able to appreciate my parents' stories all the more because of it.

Years after college, my parents got married. Their two best friends from college also got married (I've heard that Obies are more likely to marry each other than alumni from any other college... could be wrong but so far it seems very, very possible). All four of them are still very close friends and see each other regularly, despite living on opposite sides of the country. The same two friends also have three boys, and the two oldest have already graduated from Oberlin. I once would have mocked my parents and their friends for this, telling them that they were boring and needed to make some new friends. Now these stories just affirm that those intangible things I like about Oberlin — the people, the connections — are real. I've met a lot of other Oberlin students who are the children of Obies. It seems to be a pretty big trend. I guess the takeaway is that, yeah, we really do end up like our parents. I see their traits growing in me every day, but that's not always such a bad thing.