After all, if you're not a musicologist or into really old music, then 'historical performance' probably doesn't mean a lot to you. At its core, it's the study of music written either pre-classically (as in before the death of Bach in 1750) or in the early classical period (as in Mozart and maybe, maybe up to Beethoven).

HP is pretty much ignored by the "mainstream" classical music world (I giggled as I wrote that; classical music is pretty far out of the mainstream). But HP should be given a much more important role. After all, it's all about studying the context in which art music was written and performed. Of course, there's plenty of controversy over in the HP world over what, exactly, musicians should do with information about that context--there should be! There are ethical problems: Are musicians obligated to play music in a certain way? I think no, but some disagree. There are epistemological questions: how much can we know about the context in which the music was written? I think not as much as others, but whatever. There are ontological problems: Where or what is the "text"--the piece of music? In the score? If so, which score? In some platonic ideal of how the piece "should" be played? In the composer's idea of the piece? These are fascinating questions, and, too often, the mainstream classical world ignores them, firm in the belief that there's one--or a narrow range--of "right ways" to play a piece, that authorial intent is gospel, that performers are morally constrained to act as a "transmitter" of the composer's music, and that there is an unbroken pedagogical line that we can draw from current performance practice back to the classical composers. (The last one is particularly strange, considering that we have recordings of music from 20 years ago that sound completely different than today, but I digress.)

Now, I'm just a young turk, looking to make his mark, so I'm something of a "radical" in the HP world. I think authorial intent is a joke--that's it's unknowable, and even if it weren't, it would be undesirable. I think all performance--and, for that matter, all listening, is at least translation, if not out-and-out rewriting. But now I'm really digressing.

But, beyond studying HP--an esoteric field if ever there were one--I play a pretty bizarre instrument: the recorder. The (probably apocryphal) story I like to tell is that I was given a choice in first grade between two extracurricular activities: organized sports or the recorder. Guess which one this scrawny guy took? (Of course, I did play hockey, soccer, and I fenced at various points in my life, so this story is, you know, a story.) At any rate, I fell in love with the instrument--eventually. I also play the violin and am mediocre on the piano and the harpsichord. But the recorder has always been my main instrument. After all, violinists are--no offense, guys--a dime a dozen; it's a lot easier to be good at an instrument that, like, 20 or so people my age play (seriously, I've probably met most of them).

And I do all the regular Con things: I play in recitals; I have studio class; I practice, at various times, too little and too much; I geek out with my cohorts over obscure recorder players; I've taken music theory and aural skills.

But there are differences too. I have to worry about things like "temperament." Most people--even most musicians--don't know that "equal temperament"--or having the same amount of space between each half-step--is a modern invention. This is one reason why people often think that early music is "out of tune." Fifths, for example, can be wide or narrow, perfect or "wolf" (really, really close to a tritone).

In short, I have a lot of recorders: 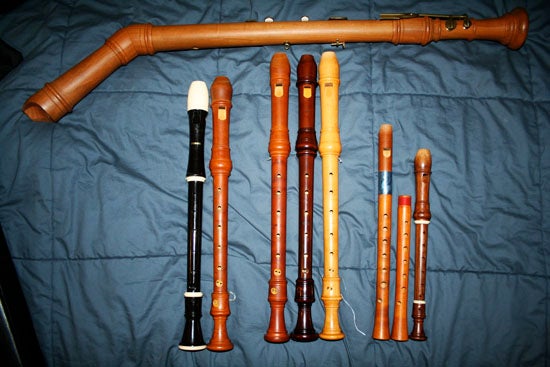 Yes, you read that right: an electric recorder. It's got a hole in the side where you can screw in a pickup. Voila! It's electric! Playing that is awesome, and it's the only time I've been told that "the recorder is too loud." Sweet.

I don't really know what else to say about playing the recorder. We get to use the harpsichord and organ rooms in the Con, which is pretty cool. When I remember the key, this means I never have to walk around trying to find a room with a stand.

Here are two clips from my junior recital. In the first, Mark Schuldiner is playing the harpsichord and the excellent Will Mason is on drums. This is "Transitional" music (from the early 1600s), and I'm playing my A415 Ganassi. It's of Frescobaldi's "Canzona 'Terza detta la Bernadini,'" and Castello's "Sonata Prima." (NB, it's a live recording, so you have to put up with about 30 seconds of tuning at the beginning.) In the second, Christina Guica is playing the piano. This is "The Covenant," and it was written by me, and I'm playing my A440 modern alto. Once again, you'll have to put up with tuning at the beginning.

Any questions? Ask away!

I'm glad you wrote this entry.

I think I passed you on the sidewalk the other day outside the con and I think there may have been some mutual I'm-pretty-sure-you-write-a-blog-as-well eye contact, but I'm not sure. I recognized your glasses from the picture of you with your new recorder. They're pretty great.

I've been playing recorder for 40 years, have 51 of them currently, mostly 'look, don't touch', but a few solid workhorses. Just ordered another workhorse, a Mollenhauer 2446KC, knick(angled) tenor 4 keys F/G C/C# and a trendy thumbrest. Also got an Akai 4000S. Good fun. NEVER "apologise" for playing recorder. It's given me some of the greatest peace and joy of my life.