But Oberlin students don't really do traditional. So I had no idea what to expect.

We got up at 6:30, leaving the house close to 8, so we could get our placement card in time (the placement office closes at 8:30). Then, we did nothing for a while. I got some coffee. Walked around. People-watched. Only about a third of the school wore caps and gowns. More folks wore caps, some decorated the tops. Some folks were really fancy, dressed in prom-best. Most folks I knew wore simple dresses, suits, button-down shirts. Yoshi wore a suit and a top hat.

Mom: What are you going to wear?
Aries: Uh. I don't really know. I don't have time to buy a dress.
Mom: You don't have time to get a dress? I thought you were done with finals now.
Aries: Guys, circus. Circus every day. No time to take a scenic trip to score a dress. I'll look nice. I got a few dresses from the swap.
Mom: ... all right.
Dad: No cap or gown? There's going to be a lot of photos.
Aries: No.
Mom: Wear what you want--
Dad: Just don't do it naked, okay?

The next day, I looked at Weather.com. Sunny, they predict. Warm, they say.
Perhaps... a sun dress? 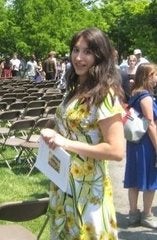 At 9:00, I lined up, though the illustrious "I" section was pretty small. Then, we waited and waited some more. I skipped to the bathroom, running into professors in their official regalia, as well as Ben Jones, Captain-in-Chief. On their parts, the professors were wearing formal academic regalia, fascinating costumes indicating what kind of degree they held. Their robes were huge, adorned with collars of all different colors. They looked like ... well... Harry Potter characters.

The marshals, who led the graduation procession, held batons that looked suspiciously like magic wands. As if they were charming the whole event to go according to plan.

As I left the bathroom, I heard the blast of trumpets. Before I knew it, we had marched to our seats. The ceremony begun: a prayer, introductions, greetings, then Honorary Doctorate Degrees. Though the winners were really cool people: pioneers, activists, scientists and administrators ... some of the introductions were on the long side. The presenters told us the accomplishments of the award recipients, talking about the awards they had won, the councils they chaired, and the foundations they founded...

Meanwhile, Weather.com didn't lie -- the sun was pouring down. As the speakers went on and on, I could feel my arms and legs heating up.

My favorite presenters were Lynn Powell and Dan Stinebring awarding degrees to Mary and Steve Hammond. It was a perfect match. Mary and Steve are the pastors at Peace Community Church and serve as amazing community leaders. Their work supports so many different groups at Oberlin, from long-term residents to homesick first-years. Dan and Lynn, a physics professor and a poet, are deeply involved in political and arts work. They opened up their house to the Obama campaign, to which they and their children contributed thousands of hours. In Dan's astronomy class (which I loved), he stopped class the week before the election and gave us a lot of voting-related information.

Lee Fisher, Lieutenant Governor of Ohio, gave the introduction for our commencement speaker, Richard Haass. It was an amazing introduction as the two were friends, graduating from Oberlin in the same year. While Haas won immediate success, Fisher had 7 rejection letter from top law schools. The speech was funny, unlike all of the introductions before. Fisher also shockingly humble, never mentioning that he's running for US Senate.

And then, the Commencement Speaker, Richard Haass, speaking on dissent. ... It was interesting. Take a peek here, if you like. Haass gave an apology, not a speech. He didn't make a strong case for showing dissent by working within the system, or how to gracefully duck away from a diseased organization (as he allegedly aimed). The trouble? He used himself as an example. Haass was a foreign policy adviser to both Iraq wars, and stands within the line of bureaucrats that enabled the current situation.

Moreover, the question of dissent in the workplace is not uncommon, but the extremity of Iraq is a bit... enormous. And, at this time, very clear. Most office issues are gray; they're tragic choices for employers and employees to make. They're personal, confusing and unclear. This was not a speech about shades of gray, the kind of thing a recent Oberlin grad is likely to experience.

That said, it was interesting. A speech from a top-notch alumnus speaking on really, really high-security decisions is pretty fascinating, regardless of whether it clarifies my office-place moral quandaries.

Conveniently, President Marvin "Much Adored" Krislov gave an excellent talk that was everything I could have wanted from a commencement speech. From Krislov, we expect brilliance. He's a Rhodes Scholar who took a case (Grutter/Gratz v. Bollinger) to the Supreme Court. His speech was about his unability to get a job after college until he took a part-time job at the YMCA ... it was encouraging. Sometimes, opportunity takes a while, he said.

We stood to receive the diplomas, crossed the stage to shake hands/hug the President-Much-Beloved Krislov and the Class President, Sir Derry. President Krislov gives good hugs, the sign of a great leader.

I walked back to my chair, dazed. When we'd all finally gotten our diplomas, the hats flew into the air. Folks started to hug all around me, wishing each other well.

I was hoping that you had chosen not to listen to your father...

Aw, no. Naked commencement would mean so much sunburn.

Oh my god, you're my boss now!

Also, I love these pictures.

Thank you, thank you!