Thank you to Naomi for the title of this blog post. If you catch the reference, comment below!

For the purposes of this blog post, I would like to welcome you to Oberlin alumni land! It's a pretty cool place: alumni frolic next to and within pools of success and climb lots of entrepreneurial trees and hang out in tree houses made of dreams, and sometimes get caught in massive spiderwebs that double as trampolines. And as of last year, I joined this magical land (for most of you dear readers, you'll probably be joining us in our awesome club in the next one to six years; can't wait to see you here!).

The Oberlin Alumni Association is made up of over 40,000 totally sweet alumpeople who graduated from Oberlin College, the Oberlin Conservatory of Music, the Graduate School of Theology, and the Kindergarten Primary Training School (those last two are ancient history, in case these don't sound familiar to you). Within the alumni association, there are a number of different people who volunteer varying amounts of time and energy to the greater alumni community, including but not limited to class agents, alumni admissions recruiters, career mentors for career services, and members of the Heisman Club and a variety of affiliated alumni groups.

Within those volunteer groups, there are people who spend time connecting and coordinating with their fellow alums — regional alumni club coordinators and alumni recruiters, class presidents, lead agents, alumni and class elected trustees, alumni council committee members, executive board, and more — that make up the 300 or so members of alumni council.

I was asked to be the lead agent for the class of 2010 last fall (short version: I ask my friends and fellow classmates to make gifts of any shape and size every year as a small labor of love to promote learning at my alma mater). By accepting that agentship, I am now a part of the alumni council and related super awesome weekend full of secrets (not really, I just want to pretend that anything that involves agents actually involves SECRET agents), Oberlin love, and what I've been calling all week "a meeting of minds." 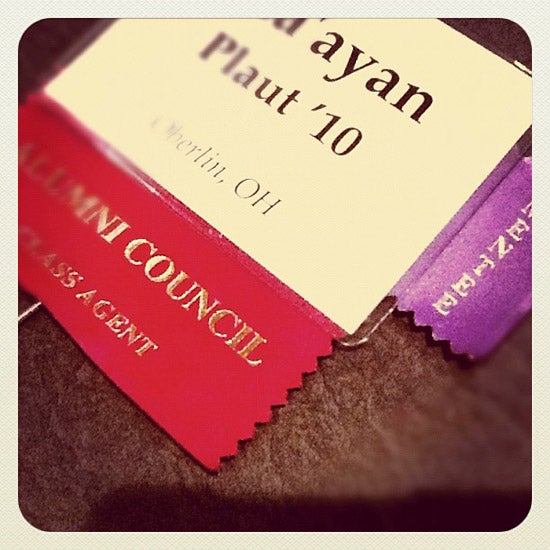 Look! I am so official and I have a nametag and EVERYTHING. I am not a very good secret agent.

I spent Friday through Sunday of last week in many many meetings and get-togethers, ranging from the specific — for me, this consisted of a young class agents meeting where we talked about the letters we were writing to our classmates this year, and then an all-agent meeting with all years of agents to talk about success stories and best practices of letter-writing and alumni outreach — to the general — all-council meetings where we learned about the new things that had happened in Oberlin during the past year, introductions to new senior staff members of the college, and reports from all the committees that met throughout the weekend.

In the less-planned hours, I attended dinners of the celebratory (hi, opening dinner tablemates Leah, Mooch, Anna, Asheley, Vin, Reid, and Gail!) and networking (hi, folks from the PR/Media/Communications [the coolest table, as Polly and I deemed it]: alums Shawn, Michael, Polly, and Jackie and students Will, Sam, Conrad, Valdone, and Jake; hurray for the coolest table!) variety. I also met and talked with a delightful number of people who were cohorts of my father, both people I met in May during their 40th cluster reunion and people I had heard stories of in the past (hi Matt, Mike, Marty, Gail, Reid, Vin, and Rick!). I talked about Oberlin's past, present, and future, and I started to see how this massive alumni association of people is full of people just like my friends and me, just separated by years, what buildings and bands were most prominent on campus at the time, and what was happening historically in the greater world. 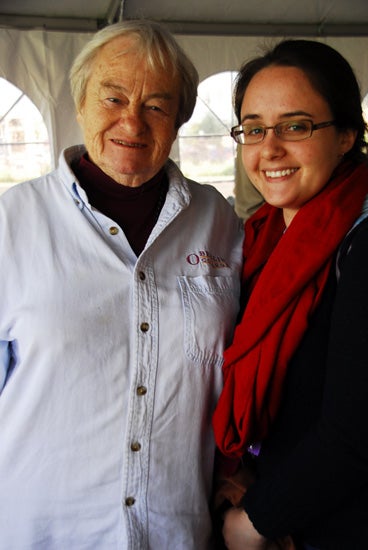 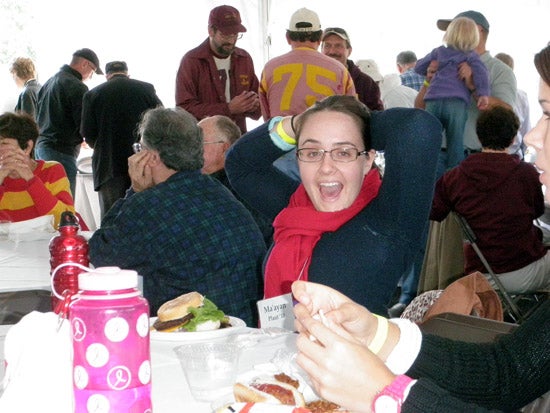 I also attended my first (football) homecoming game this weekend! Oberlin beat Hiram 27-7. GO YEO! It was a pretty fantastic game — and I posed for two awesome photos at the tailgating party pre-game, the first is Midge Brittingham '60 and myself (taken by Clyde Owan '79) and the second is my excitement over the burger I was about to eat (taken by Marty Oppenheimer '71).

As is my common initial action in new situations, I spent much of the weekend silently observing, in that bizarre conundrum where I want to ask many questions but don't even know where to begin. Luckily, I had a little "mentee" tag on my name tag, which was a cue for older and more-seasoned members of alumni council to actively ask me how things were going, if I know what was going on and where I needed to go, and if I had any questions.

I was assigned to a mentor, Dick Anderson '54, recipient of an alumni appreciation award during the opening dinner, who was ridiculously busy all weekend (Surprised? I'm not. Once an Obie, always an Obie.), but we spent a bit of time talking on Friday about council things. In addition to Dick, I had several folks guide me through the weekend; many thanks to Andra (we're cohorts because I am her daughter Zoe's "Oberlin mom"), Lindsay, and Marty for answering all my questions and introducing me to good people everywhere.

All in all, I really wish I had known way more about this gigantic web of interesting, helpful, and surprisingly similar to me group of Oberlin grads way earlier in my time as an Oberlin student. I attended two networking dinners when I was a student (during alumni council weekend and during an executive board meeting in March), both of which were eye-opening and amazing.

Growing up around alums broke the ice initially for me — I'm not scared to start a conversation with "My dad has so many stories from his time here, and I want to hear yours" and then segue into talking about what role Oberlin has played in their life since then. I wish I had had even more opportunities such as those dinners before I graduated, though. Now I'm on the other side of the table, sitting with my "Ask Me About" nametag listing my skills and expertise. It's a cool place to be, but boy, did it happen fast.

I'll close this post with a tweet from Friday that will hopefully sum up most of the weekend and most of my feelings about my new role in the Oberlin community:

"<3 alums. All I have to say about everything right now."

Also, I sure hope there is a bright future for Oberlin, but I worry that the martian in command doesn't have any better sense what the financiers are doing than any of the hedgefunds from Blackrock to Vanguard that have been getting hammered on BAC and AA drops within wider industry declines. It was obvious that Op. Twist was priced in in August, so why not sell knowing that the Bernank wouldn't say anything new (it's all traded on rumors these days anyway)? Who cares about the vanguard fund (ok, your parents might) but I sure care about Oberlin and Hope they Change their mainstream approach to guarding wealth. They must simultaneously become more ruthless, compassionate, contrarian and creative. Alliteration ftw.

I read parts of this in the Eloise voice. Just thought you should know.

@Naomi - Oh goody! Maybe I'll write a blog post and read the entire thing as Eloise in the future and it will be a video blog post!

OR maybe I will read it at an Active Minds storytime!