Like Charlotte, I'm currently in a place that's warmer than Oberlin. At the moment that means Munich, where the temperature is hovering around 40-50°F1, but as I've learned these past few weeks, that designation could apply to pretty much anywhere in Central Europe. I'm on my semester break, which I've been taking advantage of by doing a bit of traveling. A few days ago2 I got back from what I have jokingly dubbed my "Danubian Journey."

Only hours after finishing my last final exam, I boarded a Monday morning train to Vienna. I expected to love Vienna immediately, but for my first two days there I struggled through some end-of-semester exhaustion. Not only that, but I was suffering from an end-of-semester cold, which was not helped by my getting lost under a drizzling Viennese sky on more than one occasion.

Even so, I ended up really enjoying Vienna. I kept loneliness at bay by hanging out with people from my hostel and realized that traveling by myself meant that I could do whatever I wanted without worrying if anyone else would get bored. That meant going to four art museums, getting a standing ticket at the opera, visiting a Hapsburg palace, spending 10 Euro on cheese at an open-air market, and searching out the sort of Viennese café that I never quite believed could be real, but turned out to serve delicious breakfast. 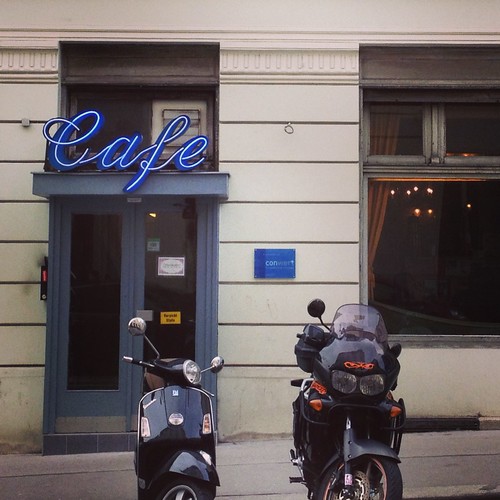 And of course, just as I was falling in love with Vienna, I had to leave. On Friday afternoon I took a train to Bratislava, where I met up with my friend Abbie (who has appeared on this blog before).

Neither of us did any research on Bratislava before we got there, I only suggested it as a meeting point because it was one hour from Vienna by train and I figured that it would be cool to visit another country. We didn't know how to say anything in Slovak (not even, "thank you," or "do you speak English?"), nor did we have any idea about what we wanted to do in Bratislava. Luckily my guidebook and some people from our hostel came to the rescue with plenty of recommendations. 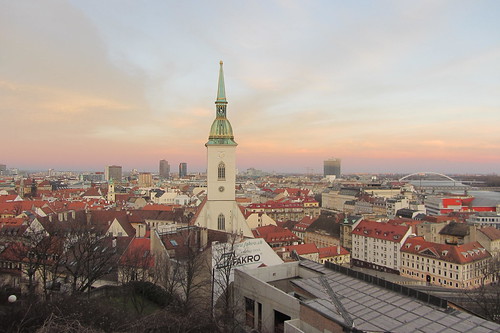 Abbie and I are both pretty relaxed travelers, so we were content to just check my guidebook and Abbie's map, pick out a few things we wanted to see or do, and try to see or do them without any particular sense of urgency. As a result, we ended up wandering in a lot of alleyways, but we also saw some lovely churches, visited the Jewish museum, ate "the best burgers in Bratislava" and some more traditional fare, found some awesome hats at a store selling Slovak folk art, and ended up walking to Bratislava Castle at sunset.

After a lovely weekend in Slovakia, we headed to Budapest, where Abbie is studying math for the semester.

Since Abbie had classes during the day, I did a lot of solo sight-seeing in Budapest. Instead of binging on art museums like I had in Vienna, I ended up at a fair amount of historical sights: Heroes Square, House of Terror (a museum about Hungary's 20th century dictatorial regimes), and Memento Park, which was almost certainly the strangest tourist attraction I have ever been to. My guidebook described it as "socialist Disneyland," but it's essentially a collection of old communist statues plopped down in a field. It had me asking, "where and when am I?" about every other minute. Especially when a Trabant, an iconic East German car, drove by as I was leaving.

Of course, I also went to some beautiful houses of worship and soaked in Budapest's gorgeous architecture.

Aside from that, Abbie and I did a lot of catching up and a lot of eating. Abbie is quite the foodie and she made it her mission to take me to all of her favorite restaurants in Budapest. We ate goulash, drank tea in a treehouse, split Hungary's cake of the year, grubbed on sandwiches at a street stand, got coffee and desserts at a cat café, had delicious Indian food, and even made a day trip to the Northern Hungarian city Eger just to try the incredibly cheap and delicious wine.

It was a great trip and my next one is coming up surprisingly soon. In about two weeks I'll be heading north, likely making stops in Berlin and Hamburg before meeting Obie-friend Ronni in Copenhagen, where she's studying abroad this semester. After spending a few days there, we're going to Stockholm and Amsterdam before I head back to Munich to start my second semester.

Oberlin is a small place, but because I ended up there and followed where my academic interests led, I've gotten to see the world, or at least a small section of Central Europe. Before I came to Oberlin I never imagined I'd see the definitely-not-blue Danube from three different cities or come to the realization that I had been to four countries in a period of a week. Back then traveling through Europe seemed like something to dream about instead of something to actually do, but because I took the plunge and decided to study abroad, I've gotten to do just that. So thanks for the opportunity, Oberlin. I don't say it enough.

1 Hard as I try I can't seem to wrap my head around Celsius. Cue people telling me that Celsius is better.

2 Almost a week ago? Time flies when you're marathoning Game of Thrones.