"Bread and circuses" is not just an episode of Star Trek, it's an expression dating from ancient Rome. Free food and entertainment were used to keep the populace happy so they didn't rebel. However, cake is more useful for appeasing college students in general, and shiny lights will get you everywhere. This was recently brought home to me in a week bookended by birthdays that contained two circus-related events.

I don't know how much it's publicized, but Oberlin has a circus. Somehow, this escaped my notice until I arrived here, but it's true--it's student-run, popular, and very large. There are over 600 students on the OCircus mailing list, roughly the same number as are in either the conservatory or OSCA (Oberlin Student Co-op Association). There are four Circus shows a year. The fall show has taken place in the Cat in the Cream the last few years and the spring show (a larger and more family-friendly affair) has been in one of the gymnasiums in Philips. There's also a winter term show (in the Cat this year, though I've heard legends of one in Finney Chapel five years ago or so) and a Commencement circus. Acts include acrobatics, tumbling, poi, contact juggling, burlesque (in the fall show) and aerials (in the spring show). Aerials are best defined as "people climbing ropes and doing cool things on them"; the art of poi comes from New Zealand and involves spinning tennis balls in socks. I took the poi ExCo this semester and bought myself a pair of glow poi. They strobe very quickly between blue, green, and red--so quickly that, when they are still, they appear to be emitting a flickering white light. When spun, however, the colors separate out into gorgeous streaks.

But during the time of which I am writing, my poi had not arrived yet. It was a rainy April Sunday and my chief ambition for the day was to bake and frost a cake. It was Guy's 21st birthday. He had requested a chocolate cake with chocolate frosting, which also happens to be my childhood favorite, and I was determined to do it right. I made the cake itself from a mix, but I refused to use storebought frosting. I was raised on the good stuff and would not wish to subject my friends to anything inferior!

I had a recipe my mom had sent me (with the warning that "it makes a whole lot") and I had assembled my ingredients: butter, heavy cream, sugar, squares of baking chocolate, and vanilla. (Interesting side note: Emma's friend Carson, who's taking this semester off, left most of her cooking apparatus with us, including a truly enormous bottle of vanilla--at least two cups, probably more.) I also had a large bowl filled with ice cubes stolen from the dining hall that morning. This was for cooling the frosting so that it reached the correct thickness.

The work went smoothly. I baked the cake in a single rectangular pan for simplicity's sake. As I worked on the frosting, I noticed that baking chocolate has become much easier to cut into easily-meltable pieces since I was little. This has nothing to do with the fact that I have larger hands and more leverage on the knife now--that chocolate used to be rock-solid, I swear.

It took quite a while for the frosting to reach the correct consistency, and the cake was still slightly warm as I spread it on. This meant it was not the most elegant frosting job in the history of cakes, but it was warm and gooey and delicious when eaten fresh. Our little gathering was quite a happy one.

Interesting note: excess chocolate frosting, when stored in a refrigerator, becomes, to all intents and purposes, fudge.

By the Friday of that week, my focus had shifted to anticipation of my own birthday. Rather than send me one large birthday-present box, my parents were sending me packages periodically throughout the week, a little surprise every day or two, and I was really enjoying it. I smuggled one of my treats (Twizzlers, which had come in a package of homemade cookies) into the spring circus. 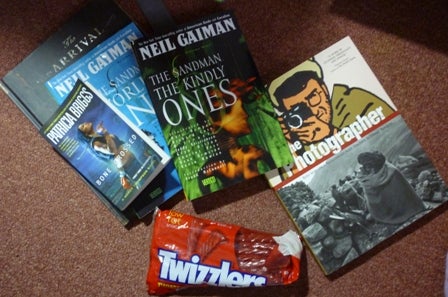 Besides many of my fellow poi-co-ers who were in the poi act, Sci-Fi Hall residents and Circus administrators overlap significantly, so I knew many of the people performing in and/or running the show. Some of the groups involved, however, were not from Circus-related ExCos or the Sci-Fi cadre. OSwing, Oberlin's swing dance association, had an act, as did Oberlin Jump, a jump rope program in the elementary schools. Those kids were frighteningly good. The most impressive stunt, I thought, was when they all jumped in place in a long line while one of the kids went down the row behind them with a rope, overlapping and jumping with the child in front. They did this a few times, jumping with three people at once at the end.

There's always some kind of narrative for the circus. Usually it is, by necessity, a rather weak plotline, used primarily to unite the disparate acts and to generate some humor. This show's title was "A Circus in Time." It tracked the adventures of three rather scatter-brained lab assistants who accidentally took off with a time machine. They encountered bands of dancers, tumbling Vikings, and a ballet dancer; visited the moon at the time of the moon landing (aerials); and got chased out of the future by aliens and robots on stilts. Connor has bouncy stilts, ones with a spring in the base. If you've played Portal, you'll be familiar with the kind of thing attached to Chel's feet, so she can fall long distances without damage. It's kind of like that. Anyway, they make for very exciting alien/robot chases, or dinosaur chases (last year's stilt act).

In each act, the three scientists somehow got swept up into the dance, made off with the American flag at the moon landing, or challenged the others' skills. There was a fifties sequence featuring stick-spinning tricks in which one of the scientists stole the sticks and sparkly hula hoop, for example. The jump rope kids appeared sometime in the seventies, I think, during which the three vagabond scientists met their younger selves (a cute touch). The poi act was a bunch of lights circling around in the darkness in 13.8 billion B.C., which may not have had any involvement by the scientists--they were too busy watching the pretty lights, like the rest of us. There was also a great partner acrobatics act that was performed by a bunch of Roman statues.

Nearly the entire show took place without dialogue. There was a sound system which allowed music for different acts, but, as it was in a gym, acoustics are a problem with conversations. I imagine that fitting everyone up with microphones would be extremely complicated and not worth the trouble, when silly pantomime works so well. The one line I recall, besides the occasional alarmed squawk, was during this statue acrobatics act. The scientists examined the statues, which of course moved as soon as they turned away, and they reacted with great surprise. After watching the act, however, one of the scientists--played by my R.A., Daniella!--pointed at one of the statues dramatically with her bright pink rubber gloves and exclaimed clearly, "FOR SCIENCE!" whereupon the other two seized the statue and bore him away to the time machine. He stayed there for the remainder of the show, changing posture and expression to reflect what was going on in the main story. This amused me greatly.

All in all, it was a rousing success. I thoroughly enjoyed it. Next year I hope to be involved in the circus myself. Emma, my roommate, tells me I am too busy. I protest that I'd only have four classes, research, blogging, lifeguarding and/or possibly being a Psychology 100 TA, the UU student group (minimal time commitment), and maybe an ExCo--that's all! Then she looks at me funny and throws things (usually soft things) at me, admonishing me to "Do fewer things!!" She has a point, I suppose. But come what may, I will do circus at least once before I graduate, and it will probably begin next year.

Solarity, a newly-formed student organization dedicated to providing on-campus parties that are not linked to an issue (like Safer Sex Night or Drag Ball), hosted what could be described as a school-sanctioned rave one Saturday night. Those of us in the Poi ExCo were invited to attend free of charge provided that we spun glow poi while we were there. I borrowed a pair from Josh, our instructor, and showed up shortly before the party began. The Science Center atrium had been transformed--the tables that usually fill the space had been cleared away, giant neon paper flowers hung from the ceiling, and blacklights were positioned everywhere.

As the regular guests were admitted, the lights went out, loud music came on, and a very strange slideshow was projected onto a large screen. The other performers for the evening, dancers who were mostly nude except for fluorescent paint, circulated around the dance floor. The general atmosphere, once you add in the whirling lights of our poi, Josh's string of glowsticks, and Connor's glow staff, could be described as "pretty trippy."

The atrium has one wall that is entirely made of windows. People wandered up and gazed in from time to time. (I waved at them with my poi.) I wonder what the scene looked like from a distance--the peaked shape of the science center illuminated in a blueish light from within, small colored lights dancing lower down, the flicker of the big screen . . . .

This was my first experience spinning glow poi myself, and I had a ball for the first hour and a half or so. After a while, it got incredibly crowded. Spinning balls in socks in crowded areas is not a good idea--there's too much risk of hitting someone. Most of us left a little after midnight. It was a good experience, though.

My 20th birthday was on a Monday, a schedule-unfriendly day, so we celebrated it on Sunday instead. Emma took it upon herself to bake me a cake. She didn't tell me what kind it was going to be, though, and I was thrilled when it was revealed to be a German chocolate cake with that lovely coconut-pecan frosting that no one knows the name of. (German chocolate frosting implies that the frosting itself is chocolate, not the cake, while coconut-pecan frosting sounds like it's frosting for a hybrid nut.)

She made me the frosting, dear readers, the fussy and nitpicky frosting of absolute deliciousness! And she crocheted me Discworld. 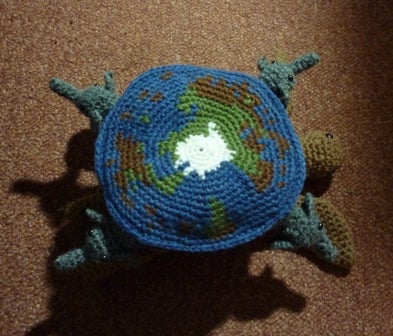 I love Terry Pratchett's Discworld books, in which the world is a pizza-shape resting on the backs of four giant elephants who are themselves standing on the carapace of Great A'Tuin, an enormous sea turtle, swimming hir way through space. (No one knows Great A'Tuin's gender.) Emma found a pattern online for crocheting it, turtle, elephants, and all. 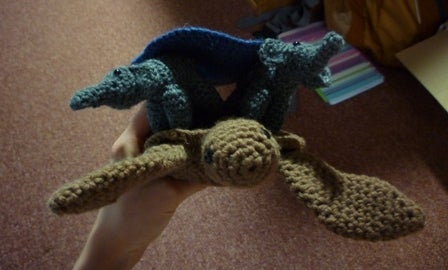 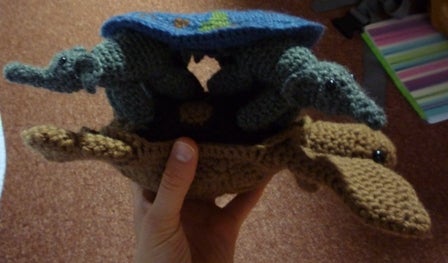 Last year she knitted me a spaceship in under forty-eight hours, though. I thought that would be hard to top, but she managed it! 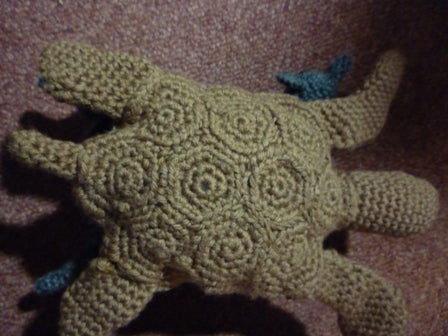 Guy also got me an extremely nerdy present, a t-shirt that combines Portal and a meme t-shirt, Three Wolf Moon. If you don't understand this, don't worry. It makes me happy and it means I have wonderful friends, that's all.

The Discworld is incredible!

And now I'm hungry for cake.

Oh my gosh I must find the pattern for Discworld! Also, yeah OCircus!

YAY POI. And circus, and cake, and oh MAN there should be a future blog post about all the interestingly crafty things that people make in Oberlin! Discworld will be in the top ten for sure.

Time doesn’t wait around for anyone.

Multi serves as an important identity-based organization on campus.