This is my brother, Noah: 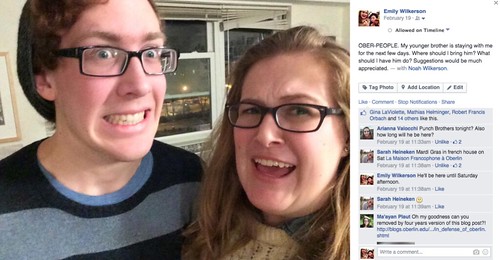 He's 16, he's just starting to look at colleges, and although I haven't mentioned him much on the blogs, he's one of my favorite people. The combination of these three things - his being old enough to stay with his big sister, his college search, and our closeness - led to my parents and I to decide that in my last semester, it was finally time for him to visit me at Oberlin.

From Wednesday night, when Noah and mom met up with me at the Feve, to Saturday night, when they headed off to a hotel to escape from the snowy roads, we managed to see a lot of Oberlin. Since he visited during the school week, Noah sat in on some classes and both of us had to do some homework, but we still had time to go to a concert, visit the Allen, cuddle with the Ginko cats, eat all over town, and do a fair amount of hanging out. In the model of the original "younger brother visits Oberlin" post, what follows are some of Noah's observations about Oberlin and some remarks from me.

The town is cozy
With the exception of Saturday, which was a balmy 28°, it was bitterly cold when Noah visited. The awful weather really made us appreciate how close the various buildings in Oberlin are to each other. Even our longest walks from place to place were no more than 10 or 15 minutes. Not only that, but everywhere we went, someone was ready with a smile, a chat, and maybe even a warm drink. That small-town feel is definitely something that attracted me to Oberlin when I first visited, but it's especially lovely during a cold snap. 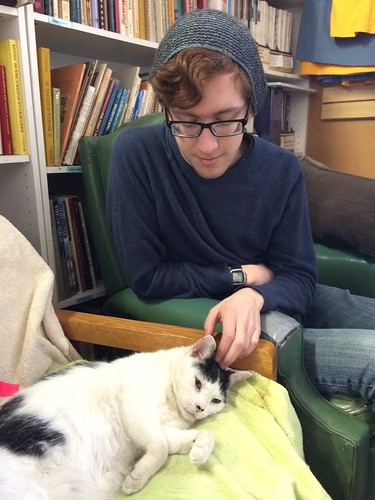 Getting cozy with a Ginko cat

College classes aren't scary
My brother and I are both worriers, and one of the things that worried him about this visit was that the classes would be intimidating. As it turned out, both of the classes Noah sat in on - The City in Antiquity and Intro to Music of the World - were very welcoming. When he e-mailed the professors to ask if he could visit their classes, they responded promptly and enthusiastically and when he was in the classes themselves, he was able to participate in activities with the other students. To paraphrase what Noah told me, he felt just about as smart as the Oberlin students, which made him feel like he could fit in well.

Professors are eager to talk
Relatedly, the interactions Noah had with professors were really positive. The professors whose classes he sat in on were friendly and interested in what he had to say, both via e-mail and in person. Even when he came to a movie screening for my East German Literature and Film class, my professor wanted to talk to him about his interests. None of that surprised me too much, but I do remember thinking that college professors were sure to be intimidating, so I'm glad Noah got to see that most professors aren't actually like that.

There are a lot of incredibly talented musicians
On Friday I took Noah to the Jazz Forum at the Cat in the Cream. I really enjoy jazz music and Jazz Fora happen weekly, but somehow I had never made it to one in my nearly two and a half years of living in Oberlin. Now I've seen the error of my ways. Noah and I were blown away by how good both of the bands were. Not only did all of the players own their respective instruments, but the groups played almost all original music. Some stand-out moments were the dance breaks from the second ensemble and the truly dreamy vibraphone solo that closed the first ensemble's set. 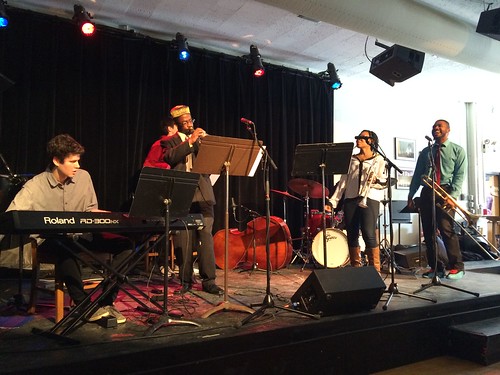 The second ensemble in action

Oberlin students LOVE events
On Thursday morning, I posted to facebook asking for suggestions for what Noah and I might do over the next few days. Unsurprisingly, we got a ton of suggestions, only a few of which we were able to follow. The events we did make it to - the Jazz Forum, the co-op special meal - were very well-attended, especially considering the terrible weather. So many people came to the Jazz Forum in particular that people who came even 20 minutes late had to sit on the floor or stand.

Good food is everywhere!
Noah and I love to eat, so while he was in Oberlin we didn't limit ourselves to making meals in my apartment. We also had burgers and brunch at the Feve; rolled pitas and hummus at Aladdin's; a standard lunch, pizza and a special birthday party meal at Old B; tea at the Cat in the Cream; and pastries at Slow Train. All of it was delicious. 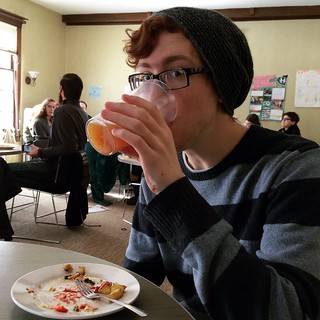 Finishing up lunch at Old B

Lots of different kinds of people
When Noah visited Union College, a liberal arts college only a few minutes from our house, his impression was that the campus was full of "white guys in polos." While there's nothing inherently wrong with white guys in polos, the homogeneity turned him off. At Oberlin, however, he saw many different types of people with a variety of perspectives.

Whether we're at a concert, working, or just sitting next to each other, silently scrolling through our tumblr feeds, my brother and I always have a good time when we're together. We probably could've had a fun few days if we had just holed up in my apartment, but I'm glad that we braved the cold. Ultimately Noah and I not only enjoyed each other's company, but I think he really enjoyed Oberlin itself. I know I did. 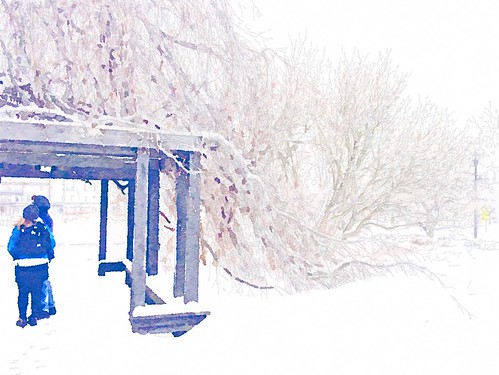 This lovely photo is from my mom, who spent Saturday in town after she decided the roads were too bad to drive back to Niskayuna as planned