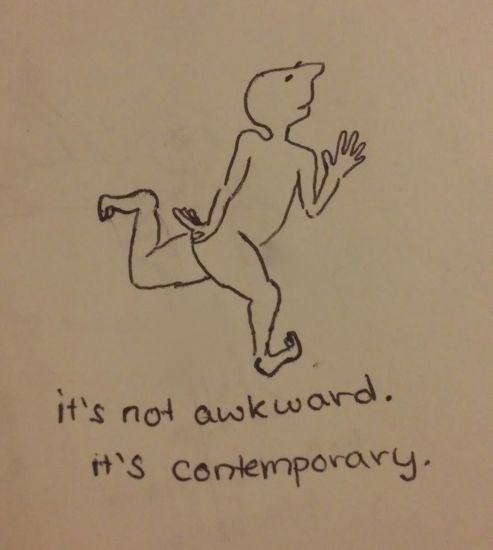 Another fall dance season has come and gone, and I am no longer a solo-virgin. Meaning that the Student Dance Showcase was last night, and I had never choreographed and performed my own solo, and now I have. How did it go? Glad you asked. Here's a blog post explaining every step of the way. Also there are cartoons. Get excited.

A few weeks ago a friend called me a "creative major." They quickly added in the "writing" but I liked the slip-up so much that I kept bringing it up. You know, in that ha-ha-what-a-funny-mistake-this-is-exactly-what-I-want-you-to-think-I-am kind of way. I even blogged about it once.

As a creative major, I spend a lot of time thinking about what process means. Meanwhile, my roommates get their work done. Process is a very different entity in different subjects. Not only in the difference of tasks you might be accomplishing, but also in the emotional investment involved in each assignment.

I am definitely not saying that other majors care less about their work. What I am saying is that, personally, when I can't finish my Neuro reading, I rarely wind up bemoaning my lack of inspiration and declaring that I'll never be Proust or Sedaris or anyone and then crying into an espresso. Which takes aim because those cups are tiny.

I've found various ways to jump start my writing process...taking a shower, standing on my head, drinking caffeinated things, sometimes all three at once which requires a lot of skill and also a straw. But new to me is the choreography process. This semester I decided to take a choreography class, due to a lifelong interest in making my own dances combined with an injury that prevented me from taking other dance classes.

If you don't know me, I do a bunch of dancing. In high school I was one of those girls with the awkward pink tights under her skirt looking like she doesn't know how to slouch. I was an aspiring ballerina. When I left for college I rejected the whole thing and chalked it up to being the creative type. See the introduction of this post.

So when I decided to take choreography, I thought that it would be right up my alley. It proved to be a great class right away. I was enjoying the short studies and exercises we did each week until it was announced that we would be starting our three-minute solo.

And then, for the next few weeks, while the other students did the work, I thought about process. Thinking that ten years of "pre-professional" training prepares you to choreograph a three-minute contemporary solo is kind of like spending years reading Shakespeare and then being told to whip up a novel with some magical realism. Even if you come up with anything, it will just be bizarre. So the first steps of my process were, well, not the best moments.

I started out by trying to just take pieces of ballet, Graham, and Horton technique and convert them into something more interesting. What I came up with was essentially a series of awkward poses with nothing to connect them. 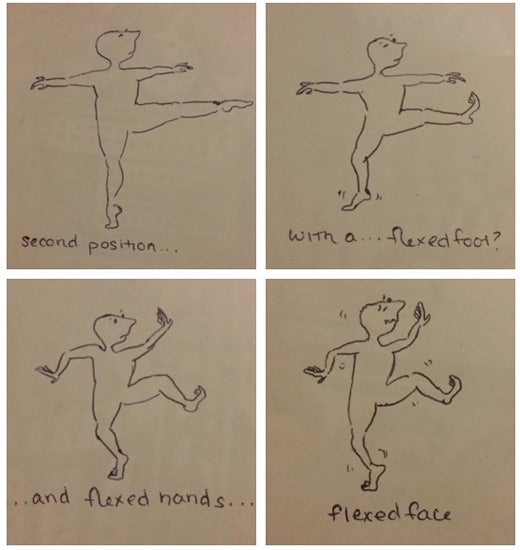 I tried to tone down these images, make them into a small array of movements, and discovered that I was barely moving at all. Which wasn't exactly the goal. So I tried out some big impressive moves and remembered that I quit ballet because 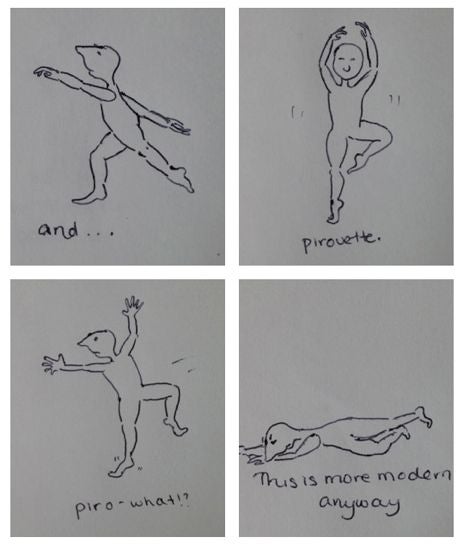 After this came a big period of complete and total nothing. I spent around four hours sitting in dance studios and not moving. Literally. Except that literally now means figuratively so what I mean is that I didn't come up with anything good. 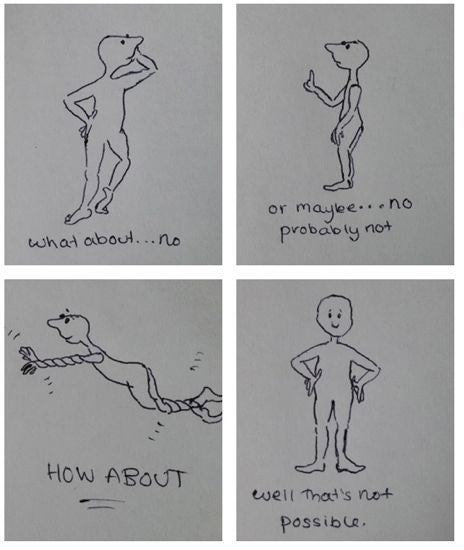 Around now you're probably thinking, But Molly! You just said you performed your first solo! Surely you came up with something! And you're right.

And then I cut everything but the first ten seconds, and I turned those into a three-minute piece. Then I sat down on a block and did the entire thing with only my upper body. And then I showed it to my teacher and she said This looks like a great first half. Which is simultaneously the most encouraging and most discouraging thing you could possibly hear.

In the end, what really got the solo together was performing it. You can feel any way about a dance piece, but once you slap some costumes and music and lights and a 250-person audience on it, well, you might still feel the same way. But at least it's dramatic. 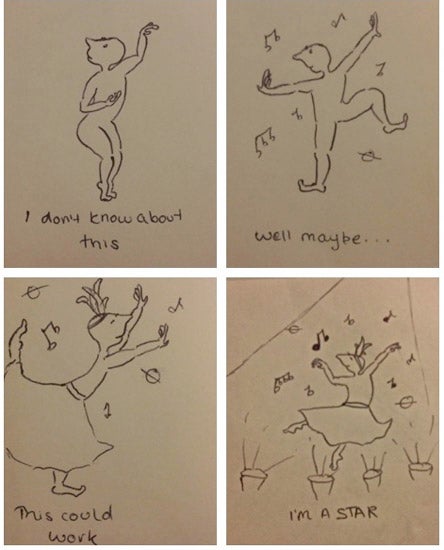 And the performance itself? One night was kind of a disaster. I won't go into it, but let's just say that pitch black would not have been my ideal lighting for the last minute of the dance. (No criticism intended for the techies of the show, they had a ton to do in a very short period of time.) But at least I didn't forget all of the choreography and start doing the macarena, which I was suddenly sure would happen as I stood backstage.

And the second night was fine. It didn't feel like my choreographic masterpiece. It wasn't life-changing. It was completely fine. And from where I started with the piece, that was incredible.