The College of Arts and Sciences is proud to welcome 40 new faculty for the 2015-16 academic year. Read on to learn about several of these faculty members’ professional accomplishments, research, and personal interests!

Laura Atran-Fresco joins Oberlin from the University of Louisiana at Lafayette, where she earned a PhD in Francophone Studies in 2014, along with a doctorate in sociology from the Sorbonne Nouvelle University in Paris. Her research focuses on North American French-speaking communities, particularly on their relationships to state and civil institutions.

Adrianne Barbo is a recent graduate from The Ohio State University. This year she will be teaching beginning French, intermediate French, and introduction to Francophone literature. Adrianne’s research interests in North African Francophone literature and culture as well as Beur literature and culture—particularly the issue of the hijab or the Islamic headscarf—will be reflected in her Francophone course. Adrianne has previously taught at The Ohio State University as well as in Marseille, France. She taught English courses at two universities in Morocco as a Fulbright language teaching assistant in 2012-2013 and is the former recipient of a Critical Language Scholarship (Egypt, Arabic - 2010).

Deborah Barer comes to Oberlin from the University of Virginia, where she is currently completing her PhD in religious studies. She will be teaching courses this year in scriptural interpretation, Jewish law, and rabbinic ethics. In her spare time she enjoys hiking, baking, and tinkering with her banjo.

Tina Botts comes to Oberlin from the University of Michigan, where she was a fellow in law and philosophy in 2014-2015. Her book, Philosophy and the Mixed Race Experience, is being published by Lexington Books this winter. Botts’ areas of research are the philosophy of law, the philosophy of race, philosophical hermeneutics, feminist philosophy, ethics, political philosophy, and the history of philosophy. She is teaching an interdisciplinary course on hate speech in the fall and the philosophy of race and gender in the spring. Botts is a film buff and a jazz singer.

Naomi Campa looks forward to teaching courses on Plato, Greek history, and citizenship in ancient Athens while at Oberlin. Her research focuses on ideology in ancient democracy. Campa previously taught at New College of Florida and holds a PhD from the University of Washington. She hopes to see an albino squirrel soon and to learn how to make a proper snowball later.

Brad Carter is teaching introductory neuroscience lecture, introductory neuroscience lab, developmental neurobiology, and developmental neurobiology lab. Prior to Oberlin, he worked as a postdoctoral fellow at the Whitehead Institute for Biomedical Research in Cambridge, Massachusetts, and received his PhD from the University of Michigan. His research interests include molecular mechanisms related to mental health and enhancing undergraduate science curriculum and career development. He spends most of his time outside work with his wife and toddler and enjoys most sports (especially with racquets) and singing.

Originally from Bethlehem, Pennsylvania, Colin Dawson comes to Oberlin from the University of Arizona in Tucson, where he earned an MS and PhD in psychology in 2011 and a PhD in philosophy in 2015. At Oberlin Colin will teach and complete research in statistics. He will also research machine learning and artificial intelligence. A lifelong Cleveland baseball fan, he is excited to be so close to the home of the Indians.

Ana María Díaz Burgos comes to Oberlin from Miami University. In the spring, she will be teaching seminars in Spanish composition and early modern literature focused on the roles women played in Spain and the Spanish Americas. She specializes in early modern Iberian literature and gender studies. Her research focuses on the tensions between institutional practices and female behavior in the trans-Atlantic world. Originally from Colombia, South America, she earned her PhD at Emory University. In her spare time she enjoys dancing, cooking, and practicing yoga.

Sarah El-Kazaz comes to Oberlin from Princeton University where she earned her PhD and specializes in urban politics in the Middle East with a focus on Istanbul and Cairo in her current book project. She teaches courses on Middle East politics, urban politics, and political economy. She comes to Oberlin with her husband, Ossama. Sarah and Ossama are both big tennis fans and are already planning their trip to the Cincinnati Open next summer.

Ben Fitch-Fleischmann comes to Oberlin from the University of Oregon where he received his PhD in economics. This year he will teach Principles of Economics as well as two courses in the environmental studies program, Environmental Economics and behavioral economics and the environment). In his spare time, Ben enjoys hiking, playing Ultimate Frisbee, and bluegrass music.

Sergio Gutiérrez Negrón comes to Oberlin from Emory University in Atlanta, having finished his PhD earlier this year. For the next two semesters, he will teach courses on language and Latin American literature. Researcher and professor by day, Sergio moonlights as a writer, translator, and journalist. In his native Puerto Rico, he writes a monthly op-ed for the island’s main newspaper, El Nuevo Día, and has authored two prize-winning novels, Palacio and Dicen que los dormidos. He is currently finishing the translation of a monograph on Mexican film which will be published in Mexico in 2016.

A native of Peru, Roberto Hoyle comes from Indiana University, where he is finishing his PhD. His research interests lie in human-computer interactions, focusing specifically on privacy and security through the use of wearable computers. His goal is to turn wearable cameras, such as Google Glass, into devices that can help us protect our privacy by allowing us to outsource some privacy decisions to them. Currently, he is teaching the courses Systems Programming and Database Systems. Outside of academia, his interests lie in wilderness search and rescue and martial arts.

Frank Kelderman comes to Oberlin from the University of Michigan, where he received his PhD in American culture in 2015. He teaches Native American studies and literature at Oberlin and is working on a book manuscript titled Authorized Agents: The Projects of Native American Writing in the Era of Removal, which explores collaborative publications by 19th-century Native American writers, speakers, and tribal leaders.

Tamika Nunley comes to Oberlin from the University of Virginia, where she completed her PhD in history. She will teach courses on slavery, race, gender, the American Civil War, and Reconstruction.

Karl Offen comes to Oberlin from the University of Oklahoma, where he taught geography for 15 years. At Oberlin he will teach Political Ecology and Environment and Society. His research examines how maps co-create the places they represent; Afro-Amerindian histories, environments, and cultures in Central America and the Caribbean Basin; and the historical ecologies and geographies of the African diaspora. He is from California, is married to Chie Sakakibara, and has two daughters.

Born in Lagos, Nigeria, Branwen Okpako comes to Oberlin from Hampshire College in Amherst, Massachusetts, where she taught as a visiting associate professor of film. She received her BSC in politics from Bristol University in Bristol, England, and her MFA-equivalent Diplom in Film Directing from the German Film and Television Academy (DFFB) in Berlin. Branwen has been producing videos, mixed-media installations, and films since the early ‘90s, which have earned her numerous prestigious awards. She also writes and directs for the theater, most notably at the Ballhaus Naunynstr in Berlin. Gender and African-Diasporic identity in Germany are recurring themes in Branwen’s work.

Bogdan Popa comes to Oberlin from Indiana University, Bloomington, where he taught and received his PhD. His main areas of research is queer studies, contemporary political thought, and political activism. On his office door you can find his motto, "My office hours are poorly attended because I teach it right the first time."

Alysia Ramos joins Oberlin from Salt Lake City, where she received her MFA from the University of Utah and worked as an adjunct professor at Westminster College. Prior, she worked as a dancer, choreographer, and teaching artist in New York City for more than a decade. Her research focuses on new approaches to modern dance centered on self-expression as a response to embodied experiences encountered in the global age, with a specific emphasis on hybrid, intercultural, and transnational movement practices. She will teach contemporary technique classes and direct the Oberlin Dance Company. She comes to Oberlin with her son, Tiago.

Matthew Rarey comes to Oberlin from the University of Wisconsin, Milwaukee, where he taught for one year after finishing his PhD at the University of Wisconsin, Madison. He specializes in and teaches courses on African and black Atlantic arts and religions; cross-cultural exchange; and theories of race, enslavement, and visual culture. In his spare time, he and his wife plan on partaking in too many pub trivia nights and searching out the finest tacos and barbecue northeast Ohio has to offer.

Chie Sakakibara comes to Oberlin from the University of Oklahoma, where she received her PhD in cultural geography. Prior to her appointment at Oberlin, Sakakibara taught at the University of Oklahoma, Appalachian State University, and Columbia University. In Fall 2015, she teaches Indigenous Peoples and Resources and co-teaches ENVS 201 Nature, Culture, and Interpretation with Janet Fiskio, associate professor of environmental studies. The primary aspect of Chie's teaching and research interests lies in the human dimensions of global environmental change among indigenous peoples in the circumpolar region and East Asia, specifically on their cultural resilience and socio-environmental justice.

Christi M. Smith teaches political sociology, School and Punishment, war and peace, and Econ Sociology: Morals/Markets. After graduating from Smith College, she worked in Copenhagen, Denmark; Washington, DC; and North Carolina before pursuing a PhD in sociology at Indiana University.

The College of Arts and Sciences also welcomes the following new faculty. 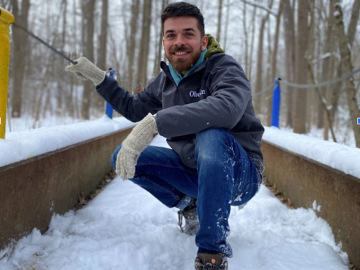 Who is Candice Raynor?

You may know that Candice Raynor is a member of the Africana Studies Department, but did you know that her nickname pays tribute to her great grandmother’s wish? Find out how in this installment of Who Am I?