The budget proposals being put forward by the Trump administration are deeply troubling in many ways for our society and for American higher education, especially for liberal arts institutions such as Oberlin. The proposed cuts in discretionary spending are contrary to our values of access and inclusion, and our commitment to scientific research, the arts, and the humanities.

If these proposals are enacted as written—an open question at this point—we would see funding for the Supplemental Educational Opportunity Grants eliminated. The Pell Grant program’s current surplus of $10.6 billion would be reduced by $1.7 billion this fiscal year and an additional $3.9 billion in fiscal 2018, putting the long-term viability of the Pell program in question. Federal work-study and other programs which help students from lower-income families prepare to enter and succeed in postsecondary education would also be cut.

Those cuts alone would be devastating. But there are many more in the proposed budget. The National Institutes of Health budget would be cut by $5.8 billion. That could reduce funding for scientific research conducted on college and university campuses. Proposed cuts as well as the rule changes being enacted at the Environmental Protection Agency may affect Oberlin’s efforts to combat climate change. And the proposal to eliminate the Corporation for National and Community Service, which runs the AmeriCorps program, and the proposals to end the Endowment for the Humanities (NEH) and the National Endowment for the Arts (NEA) would have a deleterious effect on millions of Americans and their communities.

In the interest of full disclosure, I am a member of the National Council on the Humanities which oversees the NEH, and I am a passionate supporter of the arts and humanities at the local, state, and national levels.

I am opposed to these proposed cuts. If you share that view, I encourage you to contact your elected representatives and make your views known. Along with my fellow presidents from the Five Colleges of Ohio consortium—the College of Wooster, Denison University, Kenyon College, Oberlin and Ohio Wesleyan University—I signed a letter of support for the NEA and NEH which was sent to President Donald Trump, Senators Sherrod Brown and Rob Portman, and our respective representatives in Congress.

Here is the text of our letter:

As the presidents of Ohio’s leading liberal arts colleges, we have seen how the NEA and NEH provide vital resources for local initiatives at our colleges, in our communities, in our state, and across the nation. That support helps the arts and humanities drive innovation and generate economic uplift in thousands of American communities.

Pioneering exhibitions at the Cleveland Museum of Art, free “Concerts in the Park” by the Cincinnati Symphony Orchestra, and after-school art instruction for elementary school children in Appalachia through the Dairy Barn Southeastern Ohio Cultural Arts Center in Athens are just three of the many arts and humanities programs in Ohio made possible by the NEA and NEH.

On the national level, the NEH has funded groundbreaking scholarly research, aided libraries and museums across the country in preserving their humanities collections and essential cultural and educational resources, cataloged more than 63 million pages of our nation’s historic newspapers, and helped millions of young people grapple with the lessons of history. Additionally, both the NEH and NEA offer healing programs for wounded military personnel, as well as veterans and their families, and veterans reintegrating into civilian life.

The NEA supports art and education programs in every Congressional District in the United States. Access to the arts for all Americans is a core principle of the Endowment. The majority of NEA grants go to small and medium-sized organizations and schools, and a significant percentage of grants fund programs in high-poverty communities. Both agencies extend their influence through states’ arts agencies and humanities councils, ensuring that programs reach even the smallest communities in remote rural areas.

As educators, we have seen how NEH and NEA programs benefit America’s young people by breaking down ethnic and socio-economic barriers between student populations that might not otherwise meet. Playing in an orchestra, being in a theater production or working on a history project can provide structure, a sense of purpose and a feeling of belonging that have a powerful, positive effect on the lives of young people, especially those living in disadvantaged neighborhoods and areas.

As President Lyndon Johnson said when he signed the bill creating the NEH and NEA agencies, “The arts and humanities belong to the people, for it is, after all, the people who create them.” Federal funding for the arts and humanities is essential to our education system, our economy, and our greatness as a nation. We ask you to join us in honoring the spirit of creativity and challenge you to strengthen these outstanding American institutions.

It is hard to believe this will be my final "President’s Desk" column. But in August, I will become president of Pace University in New York. It has been an honor and a privilege to serve as your president.

After a decade of leadership, Marvin Krislov will step down as the 14th president of Oberlin College and Conservatory on June 30, 2017. 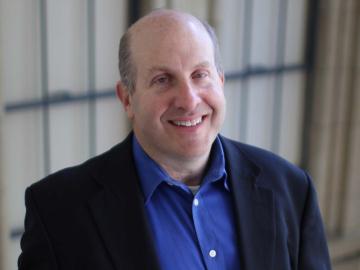 I’ve been thinking a lot about Oberlin parents and families since I received the sad news last week that Jonathan Demme, the brilliant film director, had passed away. Although Oberlin isn’t his alma mater, Jonathan really came to appreciate the College, Conservatory, and our community. His visits always seemed to energize him, and he became a stalwart supporter of our cinema studies program and the Apollo Outreach Initiative, which offers filmmaking classes to local school kids.