Emerita Professor Phyllis Gorfain, founder and artistic director of Oberlin Drama at Grafton, received the 2019 Governor’s Award for Arts Administration from the Ohio Arts Council. The arts administration award is for an “individual who has shown sustained, impactful, and visionary leadership of an arts organization.”

Learn more about Gorfain and Oberlin Drama at Grafton in this Q&A:

You began the Oberlin Drama at Grafton (ODAG) program in 2012, and have since directed or helped direct 11 productions; five of them full or abridged Shakespeare plays. What was the impetus for beginning this program?

The film was extremely inspiring, but not so much that I thought I would do it myself. I just thought I had found a community from which I could gather advice. But that summer, when I did read a Shakespeare play with incarcerated men, I was convinced that working with Shakespeare with incarcerated men would be a profound experience for us all and I would pursue that as a retirement project. I saw it as a way to combine my Shakespeare expertise and my theater knowledge—and my secret desire to direct Shakespeare. It would be a whole new way to experience Shakespeare in a non-academic context—to participate in exploring Shakespeare for social change and transformation.

So following retirement, I took two acting classes and one directing class to get some of the theater training I needed. I realized this would be a great second act in my career.

What involvement do Oberlin students and faculty have in the Oberlin Drama at Grafton program?

Over the six and a half years of the program’s existence, 24 students have worked with ODAG, many of them for three years. Most join as student assistants in their sophomore year and participate all the way through to their senior year. That the students remain consistently involved allows the men to enjoy continuity of leadership; the men also feel very connected to the college through the students. Professors have also been involved by leading master classes and teaching fundamentals of acting. The creativity, dedication, and expertise of faculty and especially of students has been essential to the success of ODAG.

Since the program’s inception, what’s changed or evolved?

I think the biggest development was having other people direct. On two occasions, two students directed their own devised plays based on the men’s writings, improvisations, and narrated experiences while I served as the assistant director. In both of those cases, audiences were deeply affected by the men’s moving stories.

Now, Tracey Field, a professional theater practitioner and an Equity actor, is directing this year’s production of the Merchant of Venice, and she earlier conducted a showcase of performances she helped make coherent and beautifully theatrical. I hadn’t originally anticipated that other people would direct plays, but it has provided the actors with different styles of directing, leadership, and plays.

Have you experienced any particularly poignant or memorable moments during the past seven years of the program?

I have probably 10 stories I could tell about profound experiences that I’ve had where actors make stunning discoveries or testify about very meaningful changes that they’ve made.

The ODAG actors take passages in the plays to places that I never could reach myself. They go beyond my knowledge and imagination—and of course that’s very humbling. This example from a production of Macbeth is very simple: One of the actors had watched the sleepwalking scene many times, in which Lady Macbeth is imagining washing a stain from her hand. During the talkback session at the end of the performance, one of the actors said this to the audience, “When I see Lady Macbeth trying to wash the stain from her hands, it's the stain of her remorse; it’s the stain of her guilt; it’s the stain of her knowledge. When I see that she cannot wash it off, I think of the stain that I will always carry from my crime, but I also think of the stain on my victim—the stain that she will never remove.” This kind of self-examination results in growth that exceeds what I could ever anticipate.

What role does the audience who watches these productions play?

For the audience members, it can be a transforming experience to meet men who are unlike what they expected, who are capable of very profound thought, who invest so much of themselves into their roles, and who achieve such courage and artistry in a very difficult environment.

It’s part of Oberlin Drama at Grafton’s mission to create a community of citizens who appreciate their shared humanity through the sharing of art.

You just received the 2019 Governor’s Award for Arts Administration, an honor that recognizes individuals and organizations who have been vital to the growth and development of Ohio's cultural resources. What does this award mean to you?

I know, and actually everyone who works with me knows, that ODAG depends on a whole community—above all, the commitment, courage, and ability and talent of the actors. That’s what people come for—to see the actors perform and to meet them.

Also, it wouldn’t happen without the prison assisting. The regional director of prisons and the warden and deputy warden have all been enthusiastic supporters of ODAG. Although the prison environment is very difficult, the top administrators have ensured that ODAG will persist and succeed. It also wouldn’t happen without all of the students, faculty, mentors, and other professionals who make ODAG.

It’s hard to accept an award such as this when you aren’t a sole artist. What I have come to terms with is that the award isn’t for me as an artist, but for me as an arts administrator. I do actually do all of the nuts and bolts—the calling, the emails, the organizing. So I am the administrator, that’s true. But what the award is really for—is for ODAG’s impact. So I feel OK as the conduit for that recognition and honor, for ODAG—the actors, the volunteers, the audiences, and the donors.

What do you see in the future for the Oberlin Drama at Grafton program? Any news or new developments?

I’m 75 years old, and I’ve been doing this for six and a half years. So, I’m hoping that ODAG will find a new direction sometime in the future. I hope that we will find someone or an institution that will head up ODAG to take it on its next leg of the journey. 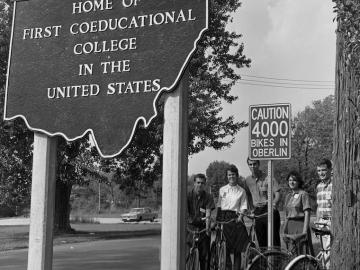 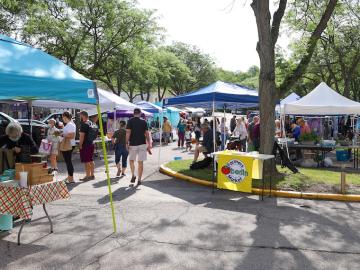