If there’s one word to describe winter-term projects, it’s “potential”—with the whole of January open, sometimes amazing opportunities fall into place. This was the case for Kiley Petersen, a third-year environmental studies major who spent her winter term as the community engagement intern at OPAL Environmental Justice Oregon in Portland, Oregon.

Petersen’s deep-seated interest in environmental justice led her to OPAL, an organization that dedicates itself to grassroots organizing and leadership development of local, historically marginalized communities. OPAL’s current focus is on how public transit and housing issues affect low-income and people of color in the Portland area. Petersen says she knew she wanted to travel for her winter term, and after receiving an enthusiastic response when reaching out to OPAL—and arranging free housing in Portland with another Oberlin student’s family—she was set.

As an intern, Petersen focused on interviewing OPAL’s volunteers, board members, and other environmental justice activists in the area, along with producing social media content, blogs, and some photography. OPAL’s work on evaluating and working for changes in the public transit system prompted Petersen to attempt some interviews with Portland locals in the style of the popular Facebook phenomenon Humans of New York, to varying degrees of success.

“I would go up to bus stops, and I’d have a few seconds for an interview and to get their information and get photo release forms signed, which was really stressful and didn’t work too well,” says Petersen. “So I tried it and it failed, but I really liked the longer interviews I did with other activists.”

Petersen says that talking to local leaders personally and learning about their inspirations and methods of activism was extremely rewarding and educational. “It was a wonderful experience and solidified where I want to go with my major,” she says. “I thought I wanted to focus on policy, but now I’m more aware about how policy affects people—it has different effects than what’s planned in the boardroom.”

Through her interviews with residents and her other friends in the Portland area, Petersen had the opportunity to explore the city and surrounding area from multiple perspectives—from hiking on the Oregon coast and frequenting doughnut shops to visiting other nonprofit organizations and seeing gentrification in progress. Gentrification is an important issue that OPAL works to address. “Huge pockets of low-income communities of color have been forced out of certain areas; it’s the reality of Portland,” Petersen says.

In addition to gaining an increased dedication to doing environmental justice work, Petersen says she gained a firsthand understanding of the necessary work nonprofits like OPAL are doing in grassroots organizing and the importance of the mobilization of marginalized communities in creating effective local change. “This was the first winter term where I’d ever been sad to leave,” Petersen says. “Everything was great.”

A few months ago, Özüm Pamukçu ’23 explored her ability to become fully vulnerable. Her journey led to the production of two original songs and a thirst for more.

October was Sustainability Month at Oberlin, and no group is more dedicated to its celebration than the Green EDGE Fund. Composed of 10 student board members, the organization distributes funds to community-based projects dedicated to environmental sustainability. 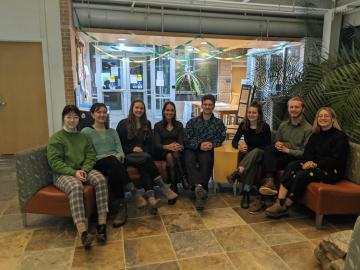