The Oberlin Project, a joint effort of the city and college, has adopted a climate positive roadmap to reduce the community’s overall greenhouse gas emissions below zero. The plan has moved Oberlin to the second phase of a four-step process for earning a “climate positive” designation from the C40 Cities Climate Leadership Group’s Climate Positive Development Program (CPDP). The Climate Positive Development Program was launched in partnership with the Clinton Climate Initiative (CCI), and the U.S. Green Building Council.

Making a commitment to reducing greenhouse gases below zero is to not just minimize harm, but to have a positive impact on the environment by investing in projects that lead to reductions in greenhouse gas emissions in surrounding communities.

CPDP aims to go “beyond carbon neutral” by creating a model for cities seeking to grow in ways that are environmentally sustainable and economically viable. Climate Positive Developments will reduce the emissions they create and offset the remainder by removing emissions from their adjacent communities.

In 2010, the city and college each signed a Memorandum of Understanding with the CPDP committing to reduce community-wide greenhouse gas emissions below zero. Oberlin is only one of 18 cities worldwide (three in the United States) that is part of this select group. Oberlin is the first partner site in North America to move to the next stage of the process.

“Oberlin is distinct in that its climate action plan applies to an existing community, not a new development project,” says Kristin Braziunas ’08, assistant director of the Oberlin Project.

“Putting proof of concept into reality, the Climate Positive Development Program is pleased to be working with such innovative partners as Oberlin and Oberlin College, and we are privileged to be able to recognize the Oberlin Project’s Climate Positive roadmap and the strategies and tactics laid out,” says Zachary Tofias, Director of the C40 Climate Positive Development Program. “Providing a tangible, locally relevant example of the future of sustainable development, C40 cities and governments around the world will learn from the Oberlin Project’s roadmap, which charts out their ambitious path to reducing greenhouse gas emissions. By proving that communities’ actions can reduce their carbon emissions, the Oberlin Project’s results will be studied in order to be replicated around the world and shall serve as a model for the future of low carbon district scale development.”

The result of broad citizen input and a committee jointly led by City of Oberlin and Oberlin Project staff, Oberlin’s climate action plan was adopted by City Council in March 2013 and includes a climate positive roadmap endorsed by the college in April 2013. The action plan:

“We are very pleased with the progress our community is making in reducing greenhouse gas emissions. We are on track to reach the goal of a 50 percent reduction by 2015,” says Oberlin City Manager Eric Norenberg. “I am optimistic that through continued collaboration with Oberlin College, other community institutions and our residents, we will achieve future milestones as well.”

About the Oberlin Project: The Oberlin Project is a joint effort of the City of Oberlin, Oberlin College, and private and institutional partners to improve the resilience, prosperity, and sustainability of the community.

The Oberlin Project is currently focused on six core goals: creating one of the first climate positive cities in America; creating new and supporting existing business ventures in energy efficiency and solar deployment, food and agriculture, and the sustainable use of local resources; conserving 20,000 acres of green space and developing a robust local foods economy to meet 70 percent of consumption; creating an educational alliance between the college, the Oberlin City Schools, the Joint Vocational School, and Lorain County Community College focused on integrating sustainability into education at all levels; developing a 13-acre Green Arts District at the U.S. Green Building Council Platinum level; and serving as a model that can be replicated in other communities. More at oberlinproject.org

About the C40 Cities Climate Leadership Group: C40 is a network of large and engaged cities from around the world committed to implementing meaningful and sustainable climate-related policies and programs locally that will help address climate change globally. C40 works in an aligned partnership with the Clinton Climate Initiative (CCI) Cities program of the Clinton Foundation. CCI Cities became the delivery partner of C40 in 2006. The closer alliance between the two organizations—announced in the spring of 2011—brings significant resources and infrastructure that will enhance and accelerate their historic activities and positions the combined effort as one of the preeminent climate action organizations in the world. To learn more please visit www.c40.org.

Oberlin College Recognized for Sustainability Initiatives that go Above and Beyond

Oberlin College has been named a 2021 Excellence in Energy Award winner by NRG Energy, Inc. for the significant impact of its sustainability initiatives that achieve notable environmental and social benefits.

Oberlin College and Conservatory’s first Environmental and Social Responsibility Report, released today, shares the many ways in which students, faculty, staff, and the broader Oberlin community are working together to inspire the world we need. The report provides a wide-ranging look at the efforts of Oberlin College and Conservatory to address environmental and social responsibility in three spheres of influence: campus commitment, community commitment, and global commitment. 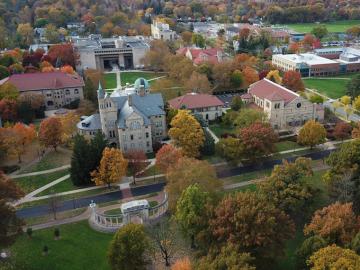 Oberlin College announced today that the U.S. Environmental Protection Agency (EPA) has recognized it as Champion in the 2017–18 College and University Green Power Challenge. 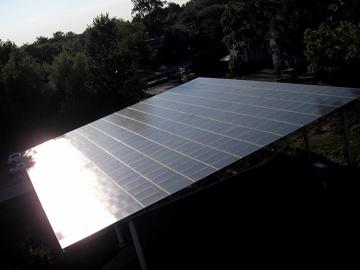