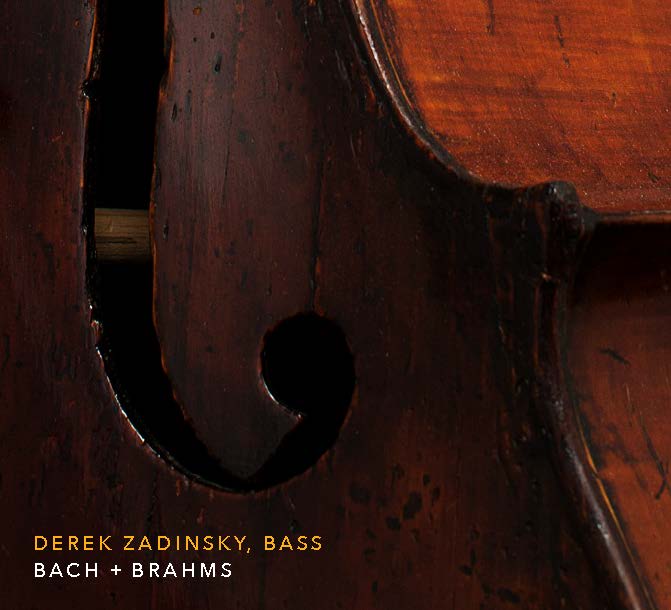 Derek Zadinsky’s debut solo recording came about in part through a sort of unspoken challenge from one of his mentors, the legendary double bassist Edgar Meyer.

It was Meyer who pointed out that, while he has no qualms with playing most of Bach’s third suite for cello on a double bass, there is one portion of the prelude—featuring successive open pedal notes that are closed by the left hand immediately after bowing—that prevented him from performing it.

On Bach + Brahms, available now by digital download from Oberlin Music, Zadinsky takes on that work as well as Brahms’ Sonata No. 1 in E Minor for Cello and Piano, Op. 38, using a custom-built five-string bass that includes a high C string, thus allowing the portion of Bach that so vexed Meyer to be played much as it would be played on a cello. Zadinsky himself transcribed both pieces for bass. He is accompanied on the recording by pianist Alicja Basinska.

“As I considered what the composers might have thought about changing their instrumentation from cello to bass, a couple thoughts came to mind,” says Zadinsky, a double bassist with the Cleveland Orchestra and a teacher at Oberlin Conservatory.

“I thought about how Brahms’ father played the bass, the influence he must have played on his son, and how satisfying and great his orchestral bass parts are as a result. I also thought about the trademark richness of his music, and how naturally that translates to the voice of the bass.

“Since I know Bach himself would transcribe some of his own works for different instruments, I would hope that he would not mind the bass being a participant in that activity,” he adds. “As I thought about how so many of his works have translated well to many different instruments, it would seem that as long as the performance maintains the purity and transparency of his original character, it would be effective and sound like it was intended to be written that way for that particular instrument.”

Distributed by Naxos of America, Bach + Brahms is available through digital music channels worldwide. Oberlin Music is the official record label of the Oberlin Conservatory of Music.