OBERLIN, OHIO – December 12, 2020, marks the five-year anniversary of the world coming together to sign on to the Paris Agreement for global climate action. To commemorate this moment, Oberlin College has joined more than one thousand leaders from local governments, businesses, tribal communities, and other institutions across the country as a signatory of the “America Is All In” joint statement.

This joint statement will be delivered to the incoming Biden-Harris administration, as well as to United Nations officials and global heads of state at the Climate Ambition Summit hosted by the United Kingdom, also on December 12.

Oberlin College has long been committed to taking action on climate change and social justice. As the college nears 2025—the target year to achieve carbon neutrality—there is much progress to celebrate and lots of work ahead. Oberlin College has achieved approximately 100 percent green electricity and offers sustainability-related courses in 22 departments across the curriculum. For these initiatives and more, Oberlin College was recently featured as a top-five baccalaureate institution in the Sustainable Campus Index published by AASHE.

‘‘Oberlin College is moving boldly ahead to achieve carbon neutrality by 2025. We are partnering with experts in the carbon-neutral field as well as those in our local community to achieve this goal,’’ said Kevin Brown, chief of facilities at Oberlin College. ‘‘The next monumental step is our Sustainable Infrastructure Program, which includes replacing our aged district steam system with a new district low-temperature hot water system with a carbon-neutral energy source providing the heat.’’

The ‘‘America Is All In’’ declaration is organized by We Are Still In, a coalition in support of climate action and a pledge to uphold the United States' commitments to reduce emissions under the Paris Agreement. With more than 3,900 organizations and institutions across all sectors of the United States, these leaders represent over half of the national population, nearly two-thirds of the economy, and more than half of the country’s emissions.

While the United States officially exited the Paris Agreement on November 4, 2020, the incoming Biden-Harris administration has committed to reentering the unprecedented global agreement. Oberlin College was also a signatory to the 2017 ‘‘We Are Still In’’ climate declaration that was issued in response to the announcement that the United State intended to withdraw from the Paris Agreement.

‘‘December 12 is more than an anniversary of an agreement, it represents a critical turning point for the future of U.S. and global climate action,’’ said Elan Strait, director of US climate campaigns at World Wildlife Fund (WWF). ‘‘Nationally, we have stumbled in our leadership on climate action. But We Are Still In shows that there was a commitment to change in the United States that never faltered. Today‘s statement from Oberlin College and hundreds like them across the country sends a clear message that we need a unified national response to the climate crisis.’’

To date, the new statement has been signed by more than 290 cities and counties across the United States, 945 faith groups, more than 400 colleges and universities, and 10 states.

Ranked among the nation’s top liberal arts schools, Oberlin College and Conservatory of Music are known for exemplary academic and musical pedagogy and commitment to social justice, sustainability, and creative entrepreneurship. The college, founded in 1833, holds a distinguished place among American colleges and universities as the first to grant bachelor's degrees to women in a coeducational environment and was a leader in the education of African Americans. The Conservatory of Music, a recipient of the National Medal of Arts, was founded in 1865, making it the oldest continuously operating conservatory in the United States. Oberlin Conservatory alumni enjoy illustrious careers in all aspects of the music world, achieving prominence as performers, conductors, composers, music educators, scholars, and arts administrators. 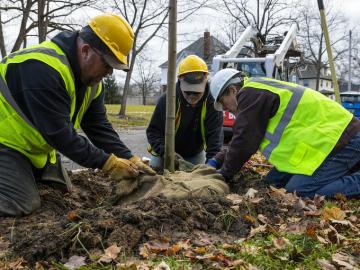