In 1985, Ken Grossi visited the Oberlin College Archives for the first time. He was a graduate student at Case Western University, conducting research on the famed Oberlin-Wellington rescue for his master’s degree in history and archival administration. Over 20 years later, Grossi was appointed college archivist at Oberlin, and now oversees the historical materials of the college that he and so many other students and researchers have studied over the past half century.

Although the college was founded in 1833, College Archives was not established until 1966. Previously, the college secretary helped to preserve the institutional record, while the college library maintained other Oberlin-related materials referred to as Oberliniana. However, Grossi says there was always an understanding that the college had a history that was important to preserve. “In fact the college was not even a year old when Philo Stewart, one of our founders, was assigned the task of recording the activities of the college in order to preserve the history.”

William E. Bigglestone was charged with the task of actually setting up the archives in 1966—a project that included establishing a control over the collections, creating finding aids, setting up procedures for providing research and reference services for people, creating record management policies, working with donors and families who wanted to donate to the college, and microfilming collections. His successor, Roland Baumann, took over in 1987, and was largely responsible for further expanding the collection, introducing high density compact shelving, establishing a website, and beginning to digitize parts of the collection. Grossi took over in 2009, and while he is continuing to move the archives into the digital age, the 50th anniversary provides a distinct opportunity to reflect on all that’s come before.

To celebrate this milestone, Archives will host several events during September and October. An exhibit containing important and quirky artifacts from Oberlin’s history, hand-picked by staff and student interns, is currently on view in the Goodrich Room in Mudd Center library. The display includes one of Grossi’s favorite photos—a majestic image of Oberlin’s third President James Harris Fairchild sitting on a horse (in photo gallery). “He may be the person who had the longest affiliation with the school,” says Grossi. “He was a student in the 1830s, then a faculty, president, and trustee — almost 68 years with the college.” There will also be an open house with film screenings of archival footage from 10 a.m. to 2 p.m. on Saturday, October 8.

Scroll through images and artifacts (below) from Archives' extensive collection of materials that document the history of Oberlin College: 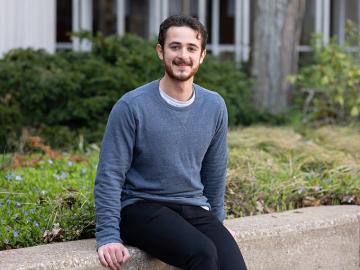