For the past 20 years, the Multicultural Resource Center (MRC) has served as a gathering place to support historically disenfranchised communities. This semester, the office moved into a new space that will accommodate Director Toni Myers’ long-range vision for the MRC.

In August, the MRC relocated from its offices in the Student Union to a three-story residence at 187 North Professor Street. The house was previously known as International House and was occupied by a variety of groups.

With the new location comes increased study, lounge, and work spaces for student coordinators, a full kitchen for hosting events, and second-floor offices for the MRC’s professional staff. The space also gives the MRC room to hire additional student coordinators this year.

Myers says accessibility was one of the most important factors in considering a move.

“I had expressed in some of the long-term visioning for the MRC that we would grow both our professional and student staff associates. I wanted to think about how we could best utilize space on campus in general,” Myers says.

At the same time, Dean of Students Meredith Raimondo proposed that the MRC’s offices in Wilder Hall would be a good fit for the International Student Resource Center because the house had been under-used by international students.

“Given the opportunity to think about it and float it with my staff, we were initially very excited. But we also had to have really important conversations about accessibility and what it meant, given that our location in Wilder was far more accessible because there was an elevator and it was a single-floor space. So we had to be thoughtful and empathic when thinking about what would be necessary in making this house a place that felt equally if not more accessible to all students,” Myers says.

For that reason, indoor and outdoor wheelchair lifts will be installed by the end of the semester.

“I love that we’re expanding the accessibility footprint on campus, so not only will we have lifts and ADA-redesigned parking for folks who visit the MRC, but there are two floors with all-gender bathrooms—and we think that’s important,” Myers says.

Accessibility also means unifying the MRC staff. In Wilder, the MRC director had a separate office. For Myers, it was important to bring the director’s office under the same roof.

“Having an office among staff that also makes me accessible to students was a priority in the decision to move,” Myers says. There is so much functional space here that students can have tutoring sessions, engage in quiet study, or hang out in another lounge. We can accommodate everyone’s needs and use of the space.”

That extra space allows the MRC to hire four additional student workers for a total staff of eight. Those positions include social justice coordinators, who will work with Assistant Director Anna Phung to create social justice education curriculum for training and workshops; community outreach program assistants; an archivist and office manager; and a communications and marketing coordinator.

“We’re increasing opportunities for students from all backgrounds, but especially those who come from low-income and working-class backgrounds who support themselves in their education,” Myers says. “The fact that we can actually accommodate all of those students feels great.”

Biology and biochemistry graduate Gabby Walsh ’18 is working as a postbaccalaureate fellow at the Food and Drug Administration. 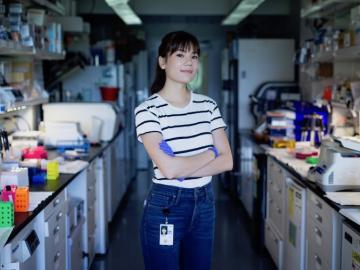 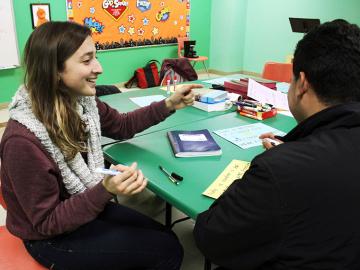