If you've ever seen a bird smoothing its feathers, chances are that it was spreading uropygial fluid, informally known as “preening” fluid, as part of keeping clean and healthy. This secretion has long been understood to aid in waterproofing a bird’s feathers. More recently, the scientific community has discovered that the fluid also contains volatile compounds that may serve as chemical signals to communicate information — like deterring predators and pests or finding a mate. To analyze these volatile compounds, scientists at Oberlin use a highly sophisticated instrument called a gas chromatograph with a single quadrupole mass spectrometer (GC-MS).

This January, through a combination of charitable gifts and funds from the college, the Department of Chemistry and Biochemistry acquired a new GC-MS to replace the department’s 16-year-old model. Not only will students and faculty throughout the science departments use this new machine, but the instrument will be key in further collaborative research between Rebecca Whelan, associate professor and chair of chemistry and biochemistry, and Mary Garvin, professor of biology.

By utilizing the GC-MS, the cross-departmental research teams have ascertained that the composition of secretions in birds’ feathers can vary dramatically across a bird’s species, age, location, and sex.

“Without the GC-MS, it would be nearly impossible to know what these secretions contain,” says Whelan. “The GC-MS is amazing in its ability to gently lift molecules into the gaseous state and push on them in different ways such that, instead of looking at a complicated soup of many components, you separate your sample physically and can interrogate the constituents of a sample one at a time. The mass spectrometer breaks up each chemical in a way that produces a fingerprint, so you can gain additional information about what your sample contains.”

Also in January, the Department of Chemistry and Biochemistry acquired a new liquid chromatograph with photodiode array detector and triple quadrupole mass spectrometer (LC-MS). This instrument will be used similarly to the GC-MS, but it will be reserved for analyzing less volatile compounds.

As an environmental researcher, Professor of Chemistry Robert Thompson frequently uses the LC-MS in his research on the pesticide levels in our food. In order to conduct his studies, he requires the additional quantification capabilities that the LC-MS provides.

While both instruments serve slightly different purposes, they are similar in that they both provide a means of identifying and quantifying one organic compound among many in a complex sample, such as in air, blood, food, water, and soil. “Each instrument can identify an unknown as one particular compound or, at a minimum, as one of a small set of possibilities out of tens of millions of known compounds,” explains Thompson. “Both instruments can also detect as little as a few picograms of a compound, which is a mass that is one million times smaller than a grain of salt.”

The instruments, with a combined list price of $430,000, were purchased using donations from alumni and friends, gift funds, a discount by the manufacturer, Shimadzu Corporation, and funds from the college. The new machines provide much more efficient analyses, with higher speed and more powerful data analysis, compared to the 16-year-old instruments they replace.

“The acquisition of these instruments greatly enhances teaching and research in many areas of chemistry and biochemistry, including environmental and forensic analysis, biochemical and peptide/protein studies, and synthesis of new bioorganic and organic compounds,” says Thompson. “All science department faculty and majors will use one or both instruments.”

This Week in Photos: Fireflies

A wave of cell phones dancing in the air of a dimmed Finney Chapel during Friday Night Organ Pump mimics a swarm of fireflies. The image also serves as inspiration for this week’s photo series. 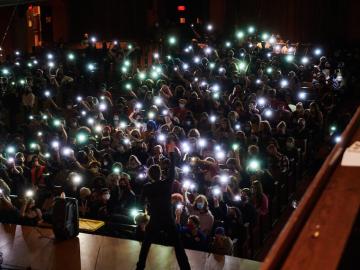