This spring, the Oberlin community had the opportunity to see Angels in America, the two-part, award-winning play that centers on New York City during the 1980s AIDS crisis. Producing this play has long been an ambition of director and Professor of Theater Matthew Wright, and the pieces finally fit together this year.

For Matthew Wright, there was no time better than now to bring Angels in America to Oberlin’s main stage in Hall Auditorium.

“I have a deep history with the play,” says Wright, who added that his recent diagnosis and treatment for breast cancer influenced his desire to put the show on. “I grew up in the era of the play, meaning I was a young, out gay man, and I lost so many friends to the AIDS epidemic. I played Prior Walter in both parts 21 years ago, and the play impacted me deeply in many, many ways.”

Though he is in good health now, going through his own life-threatening health crisis made Wright eager to realize the project.

“Oberlin students are super smart and they are socially conscious, and that combination of traits makes for really wonderful actors and directors and theater artists,” says Wright. “It’s really kept me super engaged and excited to be here.”

Wright also appreciates his students’ entrepreneurship and self-starting attitudes, and it’s a spirit he embodies in his own work. Beyond teaching and directing mainstage productions at Oberlin, Wright is a prolific actor and director in Cleveland’s theater community. Rehearsals are currently under way for a professional production of Bent Wright is directing, and he also regularly works as an actor in Oberlin’s Summer Theater Festival. With his Cleveland connection, Wright ensures his students are experiencing theater outside of Oberlin by helping them get cast in productions and connecting them to other employment opportunities.

“I bring my professional experience to the students, and then I bring my students to the professional experiences that I have in Cleveland,” says Wright. “Oberlin students are different than any I’ve ever taught because they assume a tremendous amount of agency, in the best possible way, in terms of making their own work and creating their own opportunities—and I love that.”

The communal experience that theater provides is something Wright sees as a radical notion and extremely suited to Oberlin’s history of activism in tumultuous political times. He says Angels in America, which is also experiencing a revival on Broadway right now, maintains its social salience in this vein.

“Theater is community building,” says Wright, “And I believe strongly that anyone studying theater should understand that what they’re doing is a radical act, and that they have power, and that they can use their artistic inclination and their voice to make a difference in the world.”

Nunley is among a small group of scholars researching the African American experience in the early days of the nation's capital.

Craig's work at Oberlin, spanning 63 years, resulted in more than 150 publications, with many featuring Oberlin undergraduates as coauthors. He was passionate about undergraduate research, making the Oberlin chemistry department one of the earliest adopters of the practice among liberal arts colleges. 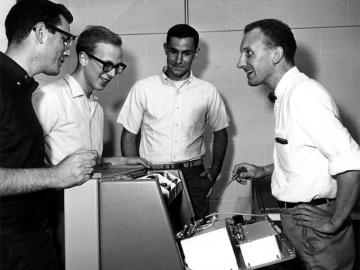 Robin Beth Schaer Receives $25,000 Fellowship in Poetry from the National Endowment for the Arts

Schaer will use the award to work on a new collection of poetry.