When students Saksham Khosla ’15, Venkata Shiva Mandala ’15, and Prakash Paudel ’15 met at the Fall 2011 International Student Pre-Orientation Program, their conversation revolved around one topic: football—or rather, whether the proper name for the sport is football or soccer. When the group met for coffee spring 2013, however, their topic had much more depth. “We were talking about the technologies that could be used in education in developing countries like India, Nepal, Ghana, and Senegal,” says Khosla, a politics and creative writing double-major with an economics minor.

Conversation quickly lead to action. In just two months—and with funding from Oberlin’s Creativity and Leadership program—Mandala and Khosla, both natives of New Delhi, India, were on their way to Khosla’s high school, Sanskriti School, with a “rudimentary prototype of a projector and speakers” in tow. The pair used the prototype to show educational geography and English language videos.

“The idea was we would just throw [the projector and speakers] in a classroom and see what happens. We didn’t know how people would respond to the resource. We just wanted to see.” As it turned out, he says,” it was incredibly useful for them. We came back to Oberlin, and said, ‘Wow, this has legs. We better run with it.’”

And run they did. What started as an idea has grown into LumenEd, a social venture that brings digital learning content to students in developing countries without reliable access to electricity or internet and connects them with peers across the world.

The name LumenEd is a combination of “lumen,” a measure of the amount of total visible light emitted by a source, and “education.” LumenEd’s product is the Bright Orange Box, a battery-powered smart projector that evolved from the prototype Khosla and Mandala took to New Delhi in 2014.

Thomas Kreek, a physics major who joined the LumenEd team in September 2013, is the primary engineer of the Bright Orange Box. With the assistance of additional developers, Kreek designed a more sophisticated Bright Orange Box that incorporates Raspberry PI—a low cost, credit card-sized computer that plugs into a computer monitor or TV—while working in New Delhi this past summer, a stay made possible by a $10,000 Projects for Peace grant.

According to LumenEd’s press materials, the Bright Orange Box outputs 500 lumens and has 8W stereo speakers, allowing it to display content even in bright, loud classrooms. It has a 7-inch screen on its top—which teachers use to navigate the device interface and play content from an external USB drive—and can record HD videos.

Khosla says LumenEd has had great success working with non-governmental organizations (NGOs) such as Teach for India that employ college-educated teachers who are comfortable using technology and are eager to bring digital content into their classrooms. “A lot of these teachers were bringing their laptops to school every day, and then the 30 to 40 students in each class crowded around the 11-inch screen. It just wasn’t working,” he says. “A projector that is bright, loud, and can display content on a blackboard, that was something they found really useful.”

The Bright Orange Box is also the vehicle through which the Video Pen Pal Program, a LumenEd service that supports dialogue between classrooms on opposites ends of the world, is made possible.

“We want there to be global learning on both sides of the spectrum,” Khosla says of the Video Pen Pal Program. “A problem many American students face is that, when they are 15 or 16, they just don’t know enough about the world that isn’t America.” Low-income students in developing countries face a similar problem, he says. “We want to give students in the developing world, who otherwise would not have seen a white face in their lives, the opportunity to interact with outside populations.”

He continues, “By giving students access to cultural interaction, they will know the world is incredibly diverse … there are kids who have different customs, rituals, and ways of thinking, but they also want to play, they also want to not do homework, and they also want Saturdays off.”

As the school year draws to an end and four of five members of team LumenEd—including Henry Harboe ’15, an economics major who joined the group in November 2013—prepare for graduation, they are working toward two primary goals: product improvement and expansion.

In regards to product, the team plans to replace Raspberry PI with an Android-based platform that will be easier for teachers to use. And for expansion, Khosla says the target for the 2015-2016 school year is 100 classrooms, 50 in New Delhi and 50 in various cities throughout the U.S. including New York and Chicago. A total of eleven classrooms (six in New Delhi and five in the U.S.) are already using the Bright Orange Box. LumenEd is also expanding its reach into Ghana and Senegal, Africa, with help from the NGOs Hope for Ghana and the SEED Project.

To help reach these goals, LumenEd hopes to raise $40,000 on Kickstarter. The team has until 8:54 a.m. on Sunday, April 26, to raise the sum. As with all Kickstarter projects, the LumenEd project must reach its minimum goal by this time in order to receive any funding.

“There has never been a solution before that has brought global learning and the possibility of accessing educational resources to classrooms that don’t have internet or electricity. We’re giving teachers a fantastic teaching aid and the opportunity to explore populations students wouldn’t have otherwise gotten the chance to,” Khosla says. “If you’re thinking of giving money to us, stop thinking and do it.”

If LumenEd does not reach its $40,000 funding goal, Khosla says the team will continue with its work on a smaller scale. “If we don’t get kickstarter funding, we’ll develop a stripped down version of Bright Orange Box, similar to the one we built in New Delhi over the summer. We’ll focus our efforts almost completely on the Pen Pal Program, making sure the American teachers and the Indian teachers are having a culturally vibrant and interactive exchange of ideas and videos and that their kids are happy,” he says. “That only requires time, and being 20, 21, and 22-years-old, time is a resource we have. Right now we have the advantage of subsisting on Ramen and very little sleep.”

He continues, “These are some of the craziest, most hardworking guys. These guys have spent 11-hour days in a dingy office in New Delhi for a period of three months putting these boxes together by hand. We have too much momentum not to go forward.”

Associate Director of Media Production Mathias Reed’s dedication and commitment to supporting the institutional mission throughout the pandemic is one of the reasons he was selected for the 2022 YB Staff Award. 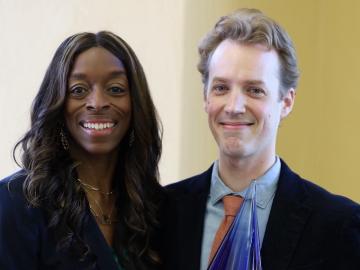 This Week in Photos: Hello Spring!

It’s a warm day in Wilder Bowl and the Oberlin community is making the most of it. Some have chosen to spend the day with friends, study, or just have fun like these two handstanding students who also serve as inspiration for this week’s photo series