It can be a nightmare for some. Give a public presentation with thousands of dollars on the line.

But on February 1, that's exactly what Oberlin students and alumni did in this year's LaunchU Pitch Competition. In front of a panel of potential investors, the LaunchU participants outlined their business plans, explaining why they were worthwhile, profitable endeavors worth backing financially. While all of the competition's participants received feedback, only one entrant received the $15,000 LaunchU Accelerator Venture Development Award.

This year's winner was Cole Hershkowitz ’11, cofounder of Chai Energy, an app that tracks energy use in homes in real time, which he plans to launch next year.

The competition is the final phase of Oberlin's LaunchU experience, which helps prepare Oberlin students and alumni launch their entrepreneurial ideas. It begins in January with a series of workshops that cover everything from business model development to branding strategies to raising finances. It continues with the LaunchU Accelerator, which provides participants with faculty and alumni mentors and helps prepare them to pitch their business ideas. LaunchU is part of Oberlin's Creativity and & Leadership Project, an initiative to provide support to students and alums in their entrepreneurial endeavors.

Hershkowitz, who began working with energy monitoring systems while at Cal Tech, where he went as part of Oberlin’s 3-2 engineering program, says he benefitted from the interaction with other entrepreneurs. "There is so much to learn when so many existing entrepreneurs are brought together," he says. "We met a lot of great mentors through the program."

"This is a tremendous example of the action and impact that Oberlin students and alumni can have when they apply their creativity and focus to bettering the world," says Conservatory Dean Andrea Kalyn, who founded the program.

Though Hershkowitz and Chai Energy were the winners of the competition's main prize, they were not the only group to receive recognition from the LaunchU panel. Current students Henry Harboe ’15, Thomas Kreek ’16, and Prakash Paudel ’15, won the $1,500 Ignition prize to further develop LumenEd, a plan to create a portable hybrid of a projector, PC, and speaker system to be used in underserved parts of India.

LaunchU also awarded Gabriel Simon ’17 the $1,000 MindCamp Scholarship for his Candid Music project, which provides support to musicians with everything from production to videography to graphic design.

According to Dean Ginsberg, program associate at with the Creativity and & Leadership Project, participating in LaunchU at any level can be a formative experience for a young entrepreneur. "The educational process alone is incredibly valuable," he says. "When you add the networking opportunities it's over the top. Oberlin has an amazing alumni base and everybody who comes back for the pitch competition weekend is not only a leader in their field but also used to live in Dascomb." 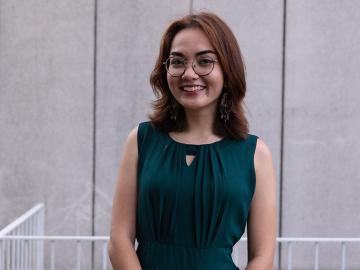