The environment of a small liberal arts campus was something new to Oberlin parent Shannon Liston. During an orientation event for parents, she was introduced to LaunchU, Oberlin’s annual venture incubator, and the program immediately hit home. A couple conversations later, Liston became an entrepreneur mentor for the 2017-18 LaunchU class.

It was a natural fit for Liston, who is corporate legal counsel for Techstars, a venture capital and private equity firm with a worldwide network that helps entrepreneurs succeed with three-month accelerator programs.

Techstars opens applications for a period of two to three months and typically receives 10,000 applications for 10 spots. “We get to pick those 10 companies and surround them with intense mentorship and support. At the end of the program, companies get to pitch their product to investors,” Liston explains.

Four ventures were awarded a combined $37,000 in startup funding in this year’s final pitch competition.

As a mentor, Liston conducted several Skype sessions with three of the competing ventures to provide coaching and feedback. She also gave a presentation to all of the participants sharing advice on creating your company, keeping it in good form, and approaching investors.

“Techstars does a lot of events like this,” Liston says. “LaunchU is incredible and well organized. I’ve been really impressed with the format and structure.”

The entrepreneur mentor program is a new addition to this year’s competition, and Director of Entrepreneurship Bara Watts says it made a considerable difference in the growth and development of the ventures. Twelve alumni and several Oberlin parents volunteered to work virtually with one or more of the entrepreneurs during the bootcamp and throughout the pitching process.

“Their specialized expertise is an added ingredient that has enriched and accelerated many of the ventures' development,” Watts says.

Liston, who began her career as an accountant, says she volunteered to be a mentor because she feels like she can relate to graduates entering the workforce now.

“It was amazing to have been a student in the ’80s when there was job stability and very well defined career paths in corporate America,” she says. “After my kids were in school, I made the decision to go to law school. I was entering an incredibly tough job market, and I didn’t look like everyone else. I experienced what students are going through now.”

Liston says she realized the need to be entrepreneurial. “You need to make connections and build a network, find and recruit mentors who can support you, and be open to something different.”

The goal of LaunchU, Watts says, is to engage all members of the Oberlin community in creating a generation of entrepreneurs who build beneficial, ethical, and profitable enterprises. The program is relevant to all disciplines because students today are entering what she calls the innovation economy.

“All organizations—for-profit and nonprofit, legacy and startup, public and private—are forced to innovate to remain relevant and successful,” Watts says. “Entrepreneurial thinking is a skill that enables individuals to see opportunity, employ innovation, and execute for the benefit of their organization—whether it be their own startup organization or one they are employed by. An entrepreneurial mindset can accelerate your career.”

Professor of Politics Eve Sandberg, who launched her own political consulting ventures, says LaunchU is a good training ground for developing the powers of persuasion.

“Regardless of the field they are entering, graduates will have to persuade others of the merits of their ideas, whether they will be working in a team or for a boss,” Sandberg says. “During brainstorming sessions, they have to be willing to not see ideas as either ‘yours’ or ‘mine,’ but rather as many ideas and multiple components that make up single project. LaunchU forces its participants to learn those lessons.”

Victor Yalom ’82, one of the alumni entrepreneur mentors, echoes that sentiment.

“Many, if not most, businesses start inadvertently. I just wanted to produce a video so I could capture the work of one psychologist,” says Yalom, who started his career in clinical psychology and went on to discover a niche market for professional psychotherapy training videos. His company has produced a library of more than 300 training videos featuring the leading practitioners in the field.

“Business is a creative enterprise. But for creative people to be successful in life, one of the key skills they must have is getting other people to part with their time and money,” Yalom says. “Say you aren’t a software developer, but you have to get someone to help you write code. You have an idea, but you’re not a natural salesperson. You need persuasive powers or the vision to attract people to join forces with you.”

Watts says this year’s participants were hungry to learn and refine their business models.

“They took full advantage of the 19 speakers, 12 business coaches, and three presenting entrepreneurs. We had very strong contenders. It’s been very exciting.”

The Twine app was conceived and supported through Oberlin’s LaunchU startup accelerator. 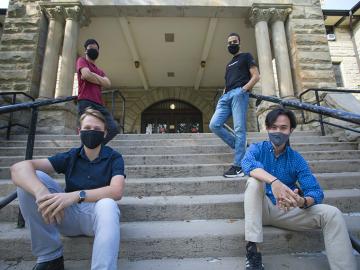