As interns with the Council of Economic Advisers, fourth-year Julienne Pasichow and third-year Jasper Clarkberg experienced a real “day in the life” for economists working on public policy.

The two spent their winter term in the White House working alongside research economists to compose the 2016 Economic Report of the President. The report, released annually in February, is an extensive document that summarizes the current state of each sector of the economy as well as progress that has been made in the past year.

Founded in 1946, the Council of Economic Advisers is a nonpartisan body that provides the president with objective economic advice on the formulation of both domestic and international economic policy. The council bases its recommendations and analysis on economic research and empirical evidence, using the best data available to support the president in setting the nation's economic policy.

Clarkberg and Pasichow contributed to research and fact-checking portions of the economic report. They also assisted in gathering research materials for other smaller reports. Pasichow, for example, worked on reports concerning criminal justice and child maltreatment. She also generated travel memos for the president.

“Until this point, I had primarily pursued law-related opportunities and internships, although I have always been interested in economics and the job opportunities in the field,” says Pasichow, a San Rafael, California, native who is double majoring in law and society and economics. “I intend to work for the government in the future, and this internship contextualized the education I’ve received at Oberlin.”

Clarkberg, an economics and studio art major from Ithaca, New York, says he appreciated the opportunity to dig into real economic research and apply it toward policy. “Oberlin’s economics department teaches us a lot about theory, but it was nice to see how it gets used in the wild. Now that I know what ‘a day in the life’ is like, I'm a lot less intimidated by a career in economic policy. The internship also got me thinking critically about what I want from a career. A lot of the staff members are fresh out of grad school. It was inspiring to hear about their careers since they are almost my age.”

The Council of Economic Advisers internship is made possible by the Rees Research and Policy Fellowship fund. Established in 1996, the fellowship is named after distinguished labor economist Albert Rees ’43, who served under President Gerald Ford.

After Oberlin, Pasichow says she intends to work in the law field for a year while she applies for law schools. She says she plans to pursue public sector criminal law and hopes to use community-based programming as an alternative to incarceration or tool to reduce recidivism. Clarkberg says he’d be happy to find himself working for the council again someday, but also wants to find a career that engages his other interests in art, computer programming, and activism.

The Team for Your Dreams

As part of Oberlin’s three-semester plan for 2020-2021, second-year students participated in a monthlong winter term SOAR retreat and had the opportunity to pursue micro-internships or research... 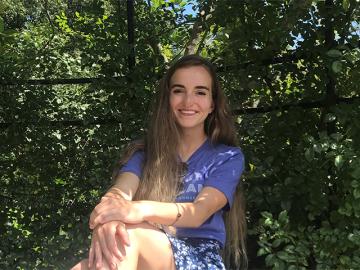