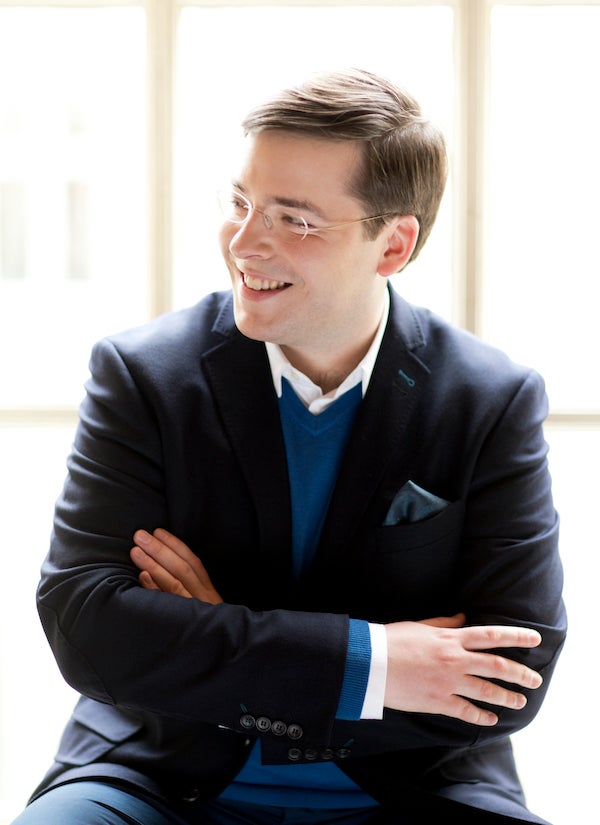 It was during the pandemic—when artists everywhere had everything to express and nobody to express it to—that James Feddeck felt his calling more than he ever had before.

For the previous seven years, the two-degree graduate of Oberlin Conservatory had been making his living as a guest conductor for orchestras all over the world—sometimes even swooping in just in time to cover for a sick music director.

And he was doing quite well at it: Those one-offs just about always led to accolades, and eventually to return engagements.

That appeared to be the case one day in the summer of 2020, when Feddeck took a call from an orchestra in Milan where he had guest-conducted several times before. But with orchestras everywhere shut down in that moment—and for who knew how much longer—he wondered what they could possibly want.

“We would like you to be our principal conductor,” he remembers hearing.

I think you’ve got the wrong person, came Feddeck's reply.

Turns out they had the right person. Now nearly two years into his role at the helm of Orchestra I Pomeriggi Musicali di Milano, and despite an ocean parked between his U.S. residence and his workplace, Feddeck and his ensemble have made music together at a time when few other orchestras could, in a nation that had been crippled by the virus. He continued to fly regularly—usually on empty planes, the flight attendants his only companions—to ensure that the 2020-21 season could take place.

And it did take place, without a single concert missed. Just Feddeck and his musicians in an empty hall, joined by a virtual audience far larger than any the orchestra previously could have imagined. And all of it—at Feddeck’s insistence—was offered free of charge.

“I said to myself This is what it’s all about now,” he recalls. “This is the time when we need people who are really committed to this.

“We did not stop. And it was a weird feeling, because I would finish these concerts with the orchestra, and the concert hall would be empty, the streets of Milan—one of the biggest cities in the world—would be empty. Everything would be closed. But I felt so connected despite all of that.

“It seemed like we had everybody. We had all of our people and more. And this is what it’s all about. This is the time when our values come into focus. The pandemic time and the time since has really motivated me, and it’s made me even more certain about the future of classical music.”

To be fair, envisioning a bright future in music was never an issue for Feddeck. A prodigious pianist, organist, oboist, and conductor raised in an unmusical but tirelessly supportive New York family, he took part in youth piano competitions, organized wind quintets, led a youth orchestra, played the organ at his church by age 8, and served as its choirmaster by 11.

“It was just so incredible, and I loved it all,” he says. “I didn’t know what I was going to do professionally. I knew music, but there was a lot of pressure from different places as to where to study.”

Ultimately, he said yes to Oberlin because Oberlin said yes to everything he dreamed of doing, whereas other music schools prodded him to choose between his passions before enrolling.

In 2005, Feddeck completed a bachelor’s degree in organ and oboe performance, and he had also played piano and frequently organized ad hoc orchestras and other ensembles. The following year, he completed a master of music in conducting.

“I felt so fortunate to come to Oberlin,” he says. “As time has passed since I left in 2006, I realize just how much Oberlin made me everything that I am. The place and the people. I had wonderful teachers and mentors of all kinds, and great friendships.

“There are not many places as rich and microcosmic as Oberlin. I got to do a lot, and I got to conduct a lot, probably because all of my friends in the con all had the time to do it. We all lived here in this wonderful, beautiful place. I would be rehearsing orchestras that I put together at 10 o’clock at night in Warner Concert Hall. We would rehearse until they kicked us out. I can’t think of many other environments where that could happen—where it would be allowed to happen. But here, people wanted it to happen.

“I loved orchestral repertoire and loved the mystery and the psychology of how a great orchestra works,” he says. “How a great relationship between the best orchestras and conductors happens. How can I understand that, and how can I study that? Oberlin just gave me the keys and said run with it. That’s why I say Oberlin—totally, the people and the place—made me what I am today.”

Feddeck spent the next four summers as a fellow and assistant conductor under David Zinman ’58 at the Aspen Music Festival, earning its coveted conducting prize in the process. By 2009 he was assistant conductor of the Cleveland Orchestra. In 2013 he won a prestigious Solti Conducting Award. That same year, he broke away from the orchestra to pursue other horizons.

“I wanted to learn as much as I could,” he recalls. “I felt the way to do that would be to experience as many different ways of doing things as possible. I wanted to conduct in Vienna. I wanted to understand how a Viennese orchestra thinks. I wanted to do Beethoven in Germany—which is not to say they have a better understanding, but it’s a different understanding than what I have been trained in here in the United States. It’s a different set of ideas to consider. I really wanted the opportunity to develop my own inner voice by putting myself in as many different and contrasting situations as possible.”

Feddeck certainly accomplished that, logging debuts with the major orchestras of Vienna, Berlin, Barcelona, Stockholm, Helsinki, Chicago, San Francisco, Seattle, Detroit, and Toronto, among many others. “Very rarely in that seven years did I repeat any piece of repertoire, and that was on purpose. I need to do as much as possible, and I need to push myself to take advantage of that.”

But the lifestyle he chose also came with its share of uneasy moments. “You’re waiting by the telephone a lot. It’s not 9 to 5 work. In that way, I can relate to what students are going through today. A lot of what being a professional means is that kind of way of life.”

Happily, Feddeck relishes opportunities to share his experience with students of today. For two weeks in March, he prepared the Oberlin Orchestra for a performance of Barber’s Piano Concerto and John Adams’ Doctor Atomic Symphony on his onetime home stage of Finney Chapel.

He urged them to seize the moment, and the moments that will make up the rest of their undergraduate experience. To be prepared for whatever might come next. He found them receptive at every turn, and he marvels at their resilience after two years of uncertainty.

“This is what we are about,” Feddeck says. “That’s what the pandemic has taught me. It’s really shaken and arisen the values that we have always believed and the values that Oberlin has always embodied for me. If we’re not going to be fully committed to art and music and positive human expression, and bringing people together however we can, live or over the internet—if we’re not going to do that now, then it’s all talk.”