It’s 11:45 a.m., early November, and the conservatory library is peaceful. Students study at listening stations, while others walk purposefully about the space. The small group of students standing around seem out of place, but not distracting. Five minutes pass and several more people hurriedly enter and stand next to the bookcases. A group at the far end of the room starts to form a half circle. Something is about to happen.

“I have wanted this group for a very long time,” says an excited Kathleen Abromeit to the small gathering. After a few more remarks the students behind her, the Obertones, an a capella group, step forward and glide seamlessly into their first song.

Since fall 2018, 10 guest performers, faculty, and students have taken the Tiny Ref Desk concert stage, fulfilling what Abromeit had hoped: challenging the stereotypes of a library and bringing it to life.

The concerts, modeled after the popular NPR Tiny Desk concert series, are 20-minute intimate performances in a noise-free environment. “The library isn’t an intimidating space,” explains Abromeit. “We all know it as a space where we go to explore and gather. It’s the perfect place to have a fun concert series that welcomes the entire community into an unlikely space where we can create and explore a different kind of concert experience. It also challenges our stereotypes of a library, and that’s awesome. The library is alive!”

Tiny Ref Desk returns in February with the Oberlin Black Musicians Guild. In March, a group of women will perform suffrage songs as part of Oberlin’s 2020 Women's Leadership and Suffrage programming. April is April Flutes Day, where the flute studio will perform some musical jokes. The year will end with a Tiny Ref Desk concert organized by Randal Chavez, where the entire concert will be performed on tiny percussion instruments.

Abromeit’s passion for the concert project is apparent at each show. Her introductions are brief but gracious, and afterward she excitedly moves about the space snapping photos with her cell phone. “I love this project,” she says, recalling a concert last academic year called Swoon over the Bassoon featuring Oberlin’s bassoonists led by Drew Pattison, assistant professor of bassoon. Drew, a 2010 graduate of the conservatory, had worked as a reference assistant in his student days. During the concert, Philip Swigon ’20, bassoon performance major and current reference assistant, performed a duet with Pattison.

Another concert that was really special was student-requested. “Julia Harbutt, who works as a reference assistant in the conservatory library, mentioned that she wanted to hear the Hinton basses before she graduates,” says Abromeit. “This prompt made me reach out to Peter Dominguez, professor of jazz studies and double bass. We worked together to create a concert that featured three basses from the Milton J. and Mona C. Hinton Collection in the conservatory library's special collections. He and members of his studio performed on these legendary instruments. Milt Hinton was one of the most accomplished bass players of the twentieth century who chronicled nearly 1,200 recording sessions to his name, using these basses. Let me say that again, he used these basses: the ones featured in our Tiny Ref Desk concert.

“What I really love about these concerts is that they are so much fun and intimate. When Julia Bodian played her classical guitar in September, it was just her and a guitar; people were sitting on the floor just feet from her chair. She chatted about her experience with the piece she was playing. That’s really different from the concert experience on the stage.”

In the near future, Abromeit says she would like more musicians from the college to perform and welcomes a college band or folk singer to do a concert, as well as arts and sciences faculty who play instruments. 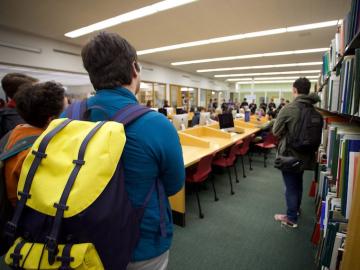 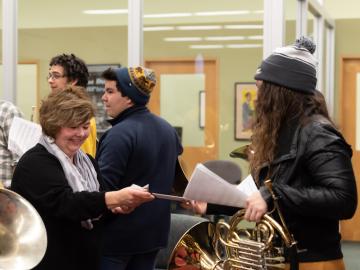 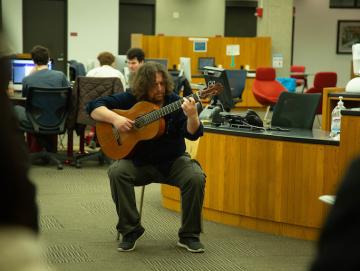 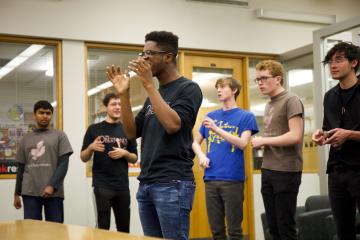 Nominate Candidates for the 2023 Commencement Speaker and Honorary Degrees

The Office of the Vice President, General Counsel, and Secretary invites the Class of 2023, Faculty, and Staff to nominate candidates for the 2023 commencement speaker and the annual presentation of honorary degrees and award for distinguished service to the community.