On November 14, the Oberlin College Table Tennis Club—led by officers Peter Nguyen and Jad Salem—traveled to Akron, Ohio, to compete against students from four colleges in the Ohio West Division: Ohio State University, Miami University, University of Cincinnati, and University of Toledo.

The matches were held in a large gymnasium and recorded by officials from the National Collegiate Table Tennis Association (NCTAA). Oberlin’s contestants split into an A-team and a B-team, facing off against similarly ranked players from opposing schools. Each match consisted of four games that were best of five sets each, with a tiebreaker doubles match.

Though Oberlin came in fifth in its division, third-year environmental studies major Nguyen says, “we had lots of fun and it was a good experience for many first-timers at a NCTTA tournament.” Especially when facing off against institutions with a much larger pool of undergraduates, the Oberlin team’s priorities have become, in recent years, focused not on beating the competition but on good sportsmanship and enjoying the game. Nguyen and Salem contend that downplaying the competitive aspect of table tennis allows more people to get involved.

“We think ping pong is important because it is not only a good sport for people to participate in, but a sport that isn't too heavy, so it's good for people who want to take breaks from school and just want to have fun in their spare time. We really enjoy playing at each meeting and teaching people some new skills,” Nguyen says.

The club is open to students of all skill levels and backgrounds. Though the game might seem intimidating to some, Nguyen and Salem stress its accessibility.

“We've seen beginners who have not even played before get so much better after a semester or two!”

The Obertones presented a virtual winter concert on December 11.

The Transition From Student Senate to Washington, D.C.

Without a rigorous competition schedule this fall, the group has used the time to network with alumni and develop a mentoring program with local high school students. 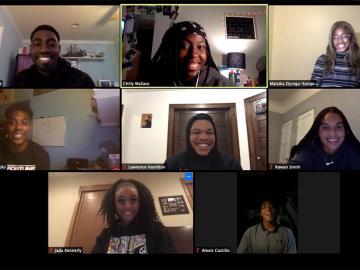