For eight conservatory students, winter term 2016 was unlike any other. They spent the month of January bringing classical and jazz music to students and teachers in Jordan through a cultural exchange program sponsored by the U.S. Embassy.

Led by Conservatory Assistant Dean for Academic Support Chris Jenkins, who has spent time performing and doing music outreach in Jordan and other parts of the Middle East, the group consisted of a classical trio with flute, guitar, and violin, and a jazz quintet with bass, drums, vibraphone, saxophone, and trumpet. Among them, four are double-degree students. The trip was funded in part by the Julie Taymor ’74 Student Support Fund for Arts and Culture Abroad and the U.S. Department of State.

Through the Embassy and other connections, the group performed at the Amman Baccalaureate School, Amman Baptist School, International Amman Academy, the University of Jordan, and Zaha Cultural Center. Three students had an opportunity to visit Zata'ari refugee camp in northern Jordan to participate in programming run by Questscope, an NGO active in the camp.

In addition to their musical outreach, the group spent time visiting heritage sites in Jordan, such as the Roman Citadel, the Dead Sea, the ancient ruins of Jerash, and Petra, the ancient capital of the Nabbatean civilization.

The goal of the trip was to promote music education and cultural exchange. “The classical and jazz scene in Jordan is still nascent,” Jenkins explains. The Oberlin group, in turn, received some Arab music lessons. While the venues they played are on par with American schools, Jenkins says most public schools in Jordan provide little to no music curriculum. “Whatever we can do to advance music education is a good thing.”

The Zata’ari camp in northern Jordan, operated by the United Nations Higher Commission for Refugees, has seen a large influx of Syrian residents in the last several years. Second-year Camille Backman and third-year students Mohit Dubey and Ellyn Butler spent a day touring the camp and performing for an audience of mostly women and children.

Dubey, a double-degree student majoring in physics and classical guitar performance, says his short time at the camp was one of the most transformative experiences from the trip.

“I learned that the entire conception of ‘refugee’ as portrayed in the popular Western media is very incorrect and dehumanizing. I went in thinking there are all these people here, fleeing from some form of conflict, and now they are stuck in Jordan until it all ‘gets sorted out.’ I had no idea about the complexity of the whole situation or its historical and political roots. But I was also thinking a lot about the ways music can be empowering to these people who have lost their homeland.”

Writing about her experience for the group’s blog, Backman, a violin performance major, says it was gratifying to be able to bring her music to the camp. The audience’s reactions after their performance “affirmed my belief that music truly provides bridges between different cultures and experiences,” she writes.

When teaching western music theory, the Oberlin and Jordan students found a common bond through pop artists such as Adele and One Direction. At the Amman Baptist School, where Oberlin presented the band students with a gift of trumpet mutes, fourth-year Matt DiBiase says he was impressed with the level of musicianship.

“This school represented some of Amman’s strongest young musicians, and may possibly be one of the best schools in which to study music at a young age in Jordan,” says DiBiase, a double-degree student majoring in neuroscience and jazz vibraphone. “I tried to teach music theory concepts that encouraged improvisation and applied them to pop tunes. I sat down with the piano students and discovered that they knew quite a lot about tunes by Adele and Taylor Swift.”

Jenkins says the overall experience—visiting the Arab world for the first time, adjusting to different social and cultural norms, and at times communicating with non-English speakers—brought about enormous growth and maturity in a short amount of time.

“In America, our perception of Arabs tends to be monolithic. I think it’s a really beneficial experience for Americans to visit that part of the world because it has a direct effect on our politics. Any time students can leave the Oberlin bubble and enter an uncontrolled environment, to assert themselves in a space where everyone is different, helps them grow up and learn the social rules of others.” 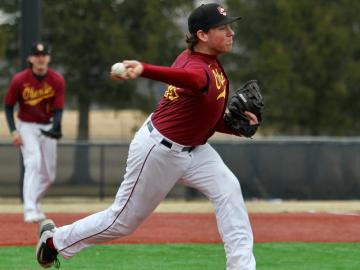