A 1999 graduate of Oberlin Conservatory, the New York-based composer and sound artist has forged a career where few others would think to tread, creating music on and for marginalized and unconventional instruments like the toy pianos and music boxes that have fascinated her for decades.

Chen has been called a virtuoso of the toy piano and a master of the art of play. Now a professor in the music department at the State University of New York at New Paltz, she is also the winner of a 2022 Guggenheim Fellowship for composition that will fuel an innovative new project with a sculpture museum in New York City. 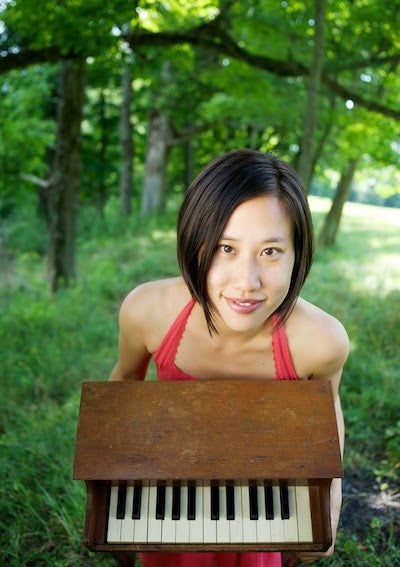 “There was just so much music and so much tradition for piano that it was really a burden for me,” she says of her traditional piano studies, which included performance degrees from Oberlin, Northwestern University, and Indiana University. An injury that sidelined her from the keyboard for the better part of two years during graduate school helped cement her passion for toy pianos.

“What was really incredible was not only that the instrument is smaller and requires a lighter touch—which helped with my physical rehabilitation—but because the instrument is not used often, it has sort of a chameleon-like reputation. Because it’s smaller and less versatile, it felt liberating to me. At that time, there wasn’t a tradition I had to carry forward, so that gave me a sense of permission that I could explore with this instrument.”

That freedom has resulted in a long list of achievements, from Chen’s 2007 founding of the Uncaged Toy Piano competition and festival, which celebrates unconventional instruments and those who play them; to her role as the sole onstage musician in the Off Broadway adaptation of the Neil Gaiman children’s story Coraline; to countless commissions leading to solo and chamber performances. All of them are united as much as anything by their sheer approachability—by their freedom from the structure and expectations of traditional classical music.

A student of professor Robert Shannon at Oberlin, Chen went on to become a founding member of the International Contemporary Ensemble, the New York-based collective created by fellow Oberlin alumna Claire Chase ’01.

“I still think of Oberlin as my creative community,” Chen says today, noting that her Oberlin colleagues remain close all these years later. “It’s where I learned to think, and it embodies all the things that are important to me as a creative person.”

The John Simon Guggenheim Memorial Foundation was established in 1925 to support advanced scholarship or artistic endeavors among exceptional individuals at the midpoint of their careers. Approximately 175 fellows are selected annually from a pool of 3,000 applicants representing a comprehensive range of disciplines, from science and engineering to performing arts and fine art. Chen is one of three Oberlin alumni to earn Guggenheim Fellowships this year, joining trumpeter-composer Peter Evans ’03 and playwright-composer César Alvarez ’03.

Chen’s fellowship will support research and creation of an installation in tandem with the Noguchi Museum in Queens, New York, one of several former studios of the late American sculptor Isamu Noguchi.

The museum’s collection includes an assortment of large sculptures crafted from obsidian, a dark glass created by the hardening of molten lava. Noguchi came to refer to them as “sounding stones” for the bell-like sound emitted when the sculptures are tapped.

“He thought of them as bells that related to his traditional Japanese culture, but they were never realized as musical instruments,” says Chen. “So they are pieces of fine art that have been stored away but never used.”

That will change in the coming year, as Chen plans to take intermittent breaks from her teaching to conduct research and compose for the installation. In addition to freeing up bits of time in her teaching schedule, she hopes the fellowship will support additional research at Noguchi’s former island studio off the coast of Japan.

“I have a personal fascination with Japanese music, and this project kind of intersects with my interest in traditional Japanese music,” says Chen, who plays bamboo and shakuhachi flutes, and studies the musical and practical uses of bells—such as mapping locations and charting times of day—among ancient cultures.

“All the things I’ve done on a toy piano make sense now, because so much of it was just about sound exploration,” she says. “As I explore the nature of the object and what makes it resonate, I’m understanding something very elemental about the material itself.”

In this way, Chen operates somewhat as Noguchi did decades earlier, carefully tapping raw materials in search of clues about their makeup and how they might best be put to use.

“I’m finding the sweet spots, and then finding the spots that are more dense and less resonant,” she says. “All of it reveals something about the world we live in.”